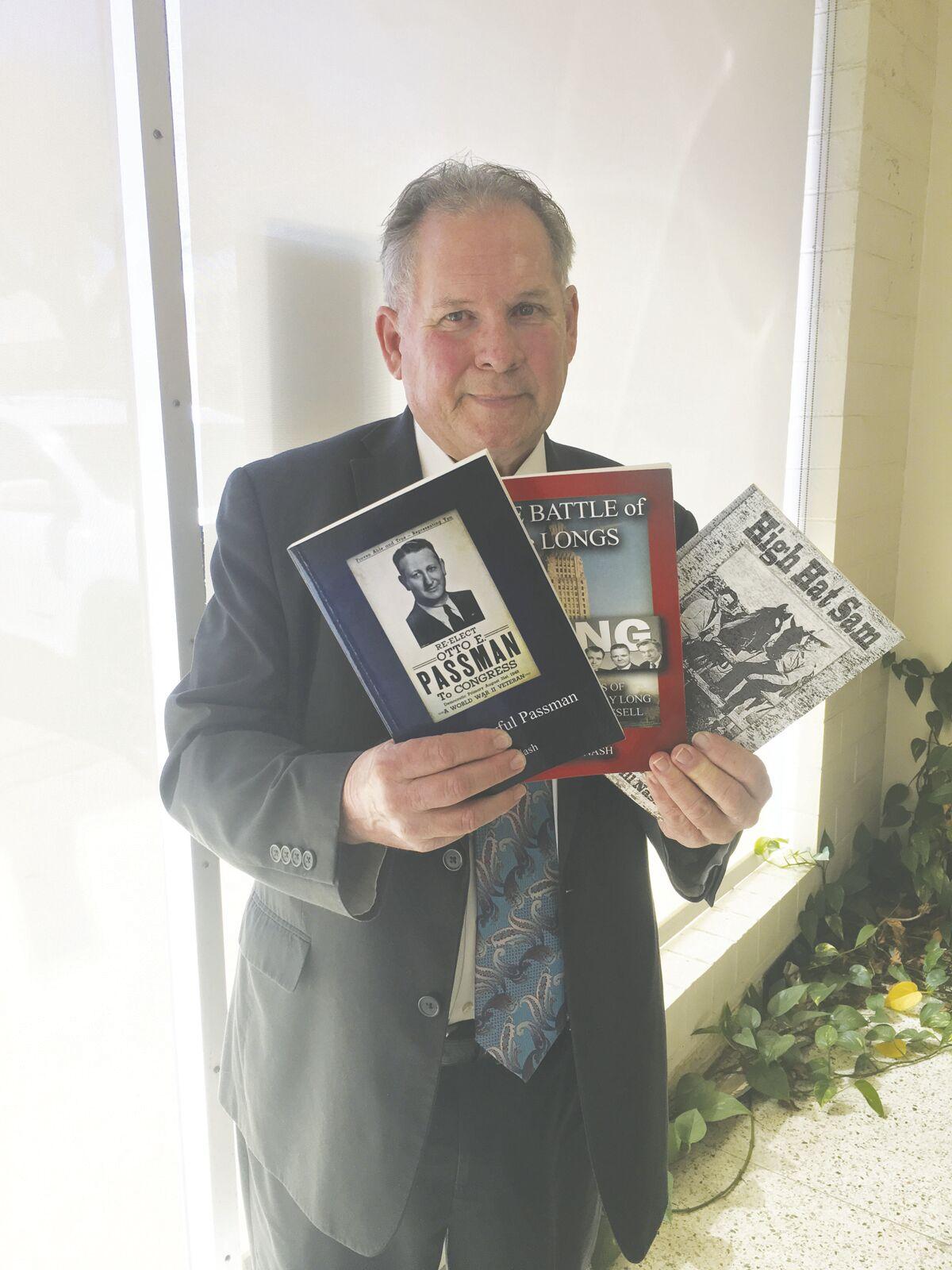 Bill Nash with his three books. 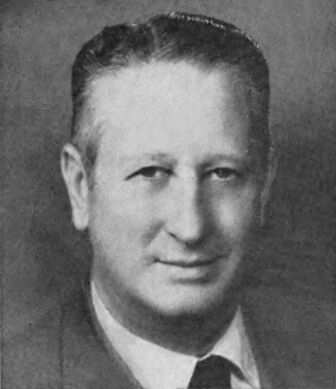 Bill Nash with his three books.

Bill Nash details the rich and interesting story of Otto Passman in his new book, “The Powerful Passman.”

Passman, who was a conservative Democratic congressman from Monroe, served from 1947 to 1977. During his thirty year congressional stint, Passman is primarily remembered for his staunch opposition to foreign aid.

According to Nash, Hartley  said, “If someone doesn’t soon cover the former Monroe Congressman, we will lose that part of our history.”

For his information on Passman, Nash largely drew upon University of Louisiana Monroe’s (ULM) official papers of the late congressman.

“It was 270 filing cabinets donated by his nephew,” Nash said. “It took me four years to go through them. Each cabinet had four drawers with 200-300 papers.”

Passman grew up a far from the halls of Washington politics in Fricke, Louisiana. Fricke was located six miles from Franklinton, the Washington Parish seat.

Born in 1900, the young Passman grew up humbly with his father, Ed Passman, a sharecropper. Nash noted many times the Passman’s would only have dried cornbread and clabbered milk to eat.

At a young age, Passman worked at various dairy farms milking cows and delivered mail in a two-wheeled buggy drawn by a horse.

Passman quit school in the fourth grade and at 13 had to leave home to “go work on his own,” Nash said.

Nash wrote in his book, “In a speech on June 8, 1969 at the T.B. Gilbert Masonic Lodge in Wisner, Passman related that at age 15, he held three jobs and attended night school to continue his education. Otto informed the Wisner audience that with this $7.25 a month salary, he mailed $2 to his mom, saved $2 and lived on $3.25 a month.”

“The details of his future life can easily be traced to the work and hard life Passman spent in his beginnings in Washington Parish,” Nash also wrote.

In 1929, having relocated to Monroe, he formed Passman Equipment Company, which was involved in the manufacture of commercial refrigerators and distributed hotel and restaurant supplies and electrical appliances.

“The various business connections which Otto had gained since his early Monroe days provided a springboard opportunity for his Congressional race,” Nash wrote.

In World War II, Passman was commissioned as lieutenant in the United States Navy and served from October 11, 1942, until his discharge as a lieutenant commander on September 5, 1944. He returned to his mercantile business and remained a staunch advocate of a strong U.S. military force.

Passman also made many connections with the veterans and Masons.

“He was in his second term as State Commander of the American Veterans of World War II,” Nash wrote. “He was initiated to the Graham Surghnor Number 383. By 1945, he was named the Grand Master Mason of Louisiana.”

Passman became politically active as a delegate to the Democratic National Conventions in 1948, 1952, and 1956.

Passman was first elected to the 80th United States Congress in 1946, when he unseated two-term incumbent Charles E. McKenzie in the Democratic primary. Passman held his Fifth Congressional District seat with minimal or no opposition for thirty years.

Passman concentrated on national defense and veterans' issues as well as his scrutiny of foreign aid programs. He supported the American military in the Vietnam War under both presidents Lyndon B. Johnson and Richard Nixon as essential to defeating communist aggression during the Cold War.

Passman chaired a pivotal House subcommittee that ruled on foreign aid appropriations. He claimed that foreign aid is often harmful because it propped up despotic regimes that might otherwise have collapsed from corruption, failure, or unpopularity. Passman could not remove foreign aid from the budget, but he frequently was able to cut the program wherever he could.

On March 23, 1974, Passman was honored in Concordia Parish at Ferriday High School football stadium. The attendance was estimated to be near 1,000. Edwards and former Govenor Jimmy Noe were keynote speakers..

“The governor informed Concordia Parish that two men in Congress could move Washington for their needs,” Nash wrote. “He said the two were Otto Passman and Senator Russell Long.”

In 1978, Passman was implicated in the Tongsun Park scandal, by which time his congressional service had already ended a year earlier. Media reports of the scandal began in 1975–1976, and they worked to sink Passman's reelection.

A South Korean businessman, Tongsun Park described himself as an "American success story," when he came to the attention of the FBI. Park lavished valuable gifts to prominent politicians in an influence peddling scheme known as Koreagate.

The scandal involved alleged bribery of over a hundred sitting or former members of Congress, including Louisiana Governor Edwin Edwards. In April 1978, Park sat before television cameras in a U.S. House hearing and listed a long list of payments — mostly in cash — to some thirty members of Congress. He said that he had given the money in little white envelopes.

Only ten members of Congress were seriously implicated. Three avoided prosecution through the expiration of the statute of limitations. Passman was not immediately prosecuted because of illness.

Thereafter, the Justice Department in 1978 indicted Passman, the biggest recipient of Park's largess – $213,000. He was charged with conspiracy, bribery, and accepting an illegal gratuity.

The indictment was expanded to include tax evasion. Because of the tax evasion charge, Passman was able, through his Alexandria attorney, Camille Gravel, to get the case transferred to Monroe. While Passman had been defeated for reelection in 1976, there was still a reservoir of good feeling for him in many quarters of Monroe.

Passman's physician said that the former representative suffered from organic brain disease and depression and preferred suicide to standing trial.

In 1976, after thirty years in Congress, Passman faced an unexpected challenger who seemed unlikely to pose a serious problem for his renomination.

Jerry Huckaby, a native of Jackson Parish and a 1959 graduate of Minden High School in Minden in Webster Parish, which was outside the Fifth District, had no previous political experience but had been a dairy farmer in Bienville Parish.

As an ally of Jimmy Carter, who was running strongly in Louisiana at the time, Huckaby upset Passman in the Democratic primary, largely because of charges of influence peddling that had engulfed the congressman in his last term in office but which had not yet led to indictment.

“Only 5,003 votes separated the old Congressman from the young man who rose to win,” Nash wrote. “Change was now called for and Otto E. Passman would have only four more months to represent the Fifth Congressional District for which he served for 30 years. The Power Passman would no longer be in Power coming Jan. 3, 1977.”

“The date was one day shy of his defeat by Jerry Huckaby in 1976,” Nash wrote. “Many believe the Congressional loss quickly damaged Passman’s health. The federal trial certainly did not help.”

This is Nash’s third book. The first two were “High Hat Sam” and “The Battle of the Longs.” He is available for speaking engagements.