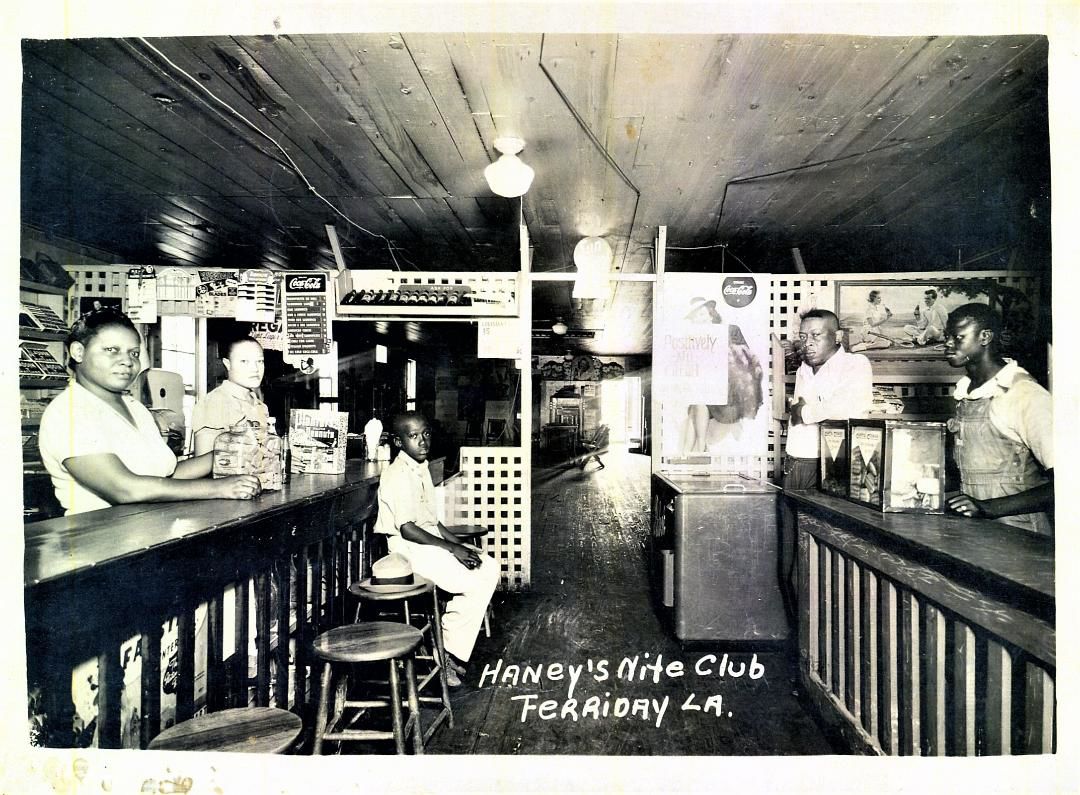 WILL HANEY is shown standing at the end of the counter at right at Haney’s Big House in Ferriday in the late 1940s or early 1950s. The identities of the other individuals in the photo are unknown. The lounge and dance floor can be seen in the background as well as a jukebox against the back wall. (Photo courtesy Gerald Williams) 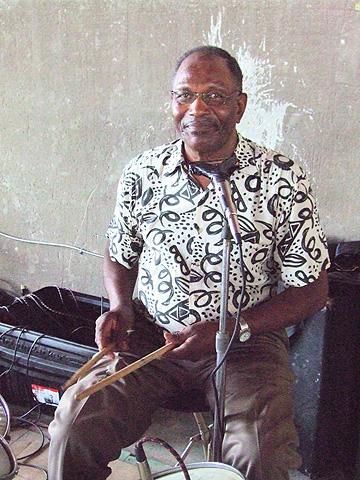 HEZEKIAH EARLY, blues drummer, harmonica player and member of Hezekiah & the Houserockers, will be inducted into the Delta Music Museum Hall of Fame Nov. 2 at 6 p.m. The event is free to the public. (Photo from www.arts.ms.gov)

WILL HANEY is shown standing at the end of the counter at right at Haney’s Big House in Ferriday in the late 1940s or early 1950s. The identities of the other individuals in the photo are unknown. The lounge and dance floor can be seen in the background as well as a jukebox against the back wall. (Photo courtesy Gerald Williams)

HEZEKIAH EARLY, blues drummer, harmonica player and member of Hezekiah & the Houserockers, will be inducted into the Delta Music Museum Hall of Fame Nov. 2 at 6 p.m. The event is free to the public. (Photo from www.arts.ms.gov)

William Haney and Hezekiah Early will be inducted into the Delta Music Museum Hall of Fame in a ceremony scheduled Saturday, Nov. 2, at 6 p.m.

Haney, owner of the legendary Haney’s Big House in Ferriday, is the first official “non-musician” to be inducted, said Linda Gardner, museum director.

Early is a blues drummer, harmonica player and vocalist from Natchez. He, James Baker and Leon “Pee Wee” Whittaker made up Hezekiah & the Houserockers.

“Music brings people together,” Gardner said. “There is so much musical history that has come through Ferriday.”

During the ceremony, YZ Ealey and Casey Gilbert will perform while Jeremy Houston of Miss Lou Heritage Group & Tours LLC will give a narrative of Haney. The event is free to the public.

Haney was born in 1895, the son of Jim and Emmaline Haney. He and his wife, Lillie, had one child, a daughter, Willie May.

Before he was the owner of the popular nightclub, Haney served as a first sergeant in the Army during World War I.

Many who remembered Haney called him an astute businessman. After returning to Concordia, he sold insurance, bought and managed rental property and operated a Laundromat and later a motel. But Haney’s Big House was the business that gave him regional notoriety.

“People would come to Haney’s all the way from Grambling,” Clarence Hymon of Ferriday said. Hymon said partygoers would flow out of Haney’s and crowd the Ferriday streets on Saturday nights in the 1940s and 1950s.

In its infancy, Haney’s Big House was a barbecue joint on Fourth Street but the ever-expanding entrepreneurship of Haney soon offered gambling and evolved into live blues, boogie and R&B.

Haney’s had two entrances, both facing Fourth Street. When entering the door on the south side of the building there was a bar to the left. The open kitchen was in the middle of the building toward the front, surrounded by a square bar where patrons could sit on one of the 20 or so stools.

The building had heat in the winter and was cooled in the summer by two large fans placed in the walls. In later years, the building was air-conditioned.

Past the kitchen was the entertainment area. When there were no dances scheduled, pool tables were located near the kitchen. The tables could be moved out of the building when entertainment was booked.

About 50 tables with four chairs each were stationed in the entertainment area. The bandstand was against the back wall. When musicians were performing, patrons would book a table in advance.

Slot machines, at one time legal, were also in the building. And in the back area, petitioned off, was a table for various card games of poker. When there was a game on, the bid spenders would come from several different states.

“People would come from Texas, Arkansas and Mississippi to play,” Hymon said. “They had sacks of cash.”

Personal bodyguards were present while the high stakes players played poker. There were no arguments or money stole at the games due to the constant presence of the large bodyguards, Hymon said.

Haney’s Big House was soon numbered with other nightclubs in the “Chitlin’ Circuit” with the many bluesmen visits. The Chitlin Circuit was a collection of venues in the eastern, southern and upper Midwest areas were African-American entertainers showcased their talents.

Hymon remembered sitting at a Ferriday hotel café one night with his friends when in walks a young B.B. King. King was looking for supper after performing at Haney’s. After he finished, his car would not crank.

“We had to push start that old raggedy Cadillac of his,” Hymon said, laughing.

The influx of talent throughout the southern United States influenced other talented musicians who would visit Haney’s.

Jerry Lee Lewis would frequent the nightclub during his youth to watch some of the top black musicians stroke the piano.

Haney’s Big House would continue to give its patrons quality blues music until 1966 when a fire destroyed the majority of Fourth Street block including the popular nightclub. The cause of the fire has never been determined.

The aging Haney never rebuilt Haney’s Big House and passed away a few years later from old age, but his memory lives on from the musical influence birthed in the Ferriday nightclub.

“William Haney had a huge influence on this area,” Gardner said. “He needs to be recognized for all the things for has done.”

Born Oct. 7, 1934, Hezekiah Early was the son of a sharecropper in Anna’s Bottom, a fertile land nestled along the banks of the Mississippi River outside Natchez.

Along with being a sharecropper, Early’s father would bag groceries on Saturdays in exchange for groceries. It was during this time, Early received his first harmonica.

“The store owner gave my dad a harmonica,” Early said in an americanroutes.org interview. “He brought it home and gave it to me.”

During the rare down times, Early would join others under pecan trees in the fields and play music. He recalled hearing songs such as Glory, Glory Hallelujah and When the Saints Go Marching In.

“(As a child), I would hold the snare drum for the (drummer),” Early said. “I would then go home an play on a lard can. I also made a guitar out of a cheese box.”

In 1959, Fitzgerald left blues after joining the church, and Early began playing with local guitarist Jesse Ware. In 1963, the duo was joined by trombonist Leon “Pee Wee” Whittaker (1906-1993), a native of Newellton. The group became Hezekiah & the Houserockers.

Hezekiah & the Houserockers were regulars at Haney’s Big House along with other Delta juke joints in the early 60s. Early has fond memories of playing at the Ferriday nightclub.

“We just enjoyed playing at a jam packed house,” Early said. “It really gave you spirit to go ahead and play. We’d rock the house, and break it down.”

Through the years Hezekiah & the Houserockers have played in large venues such as the Smithsonian Folklife Festival, Mississippi Blues Festival and other regional festivals.

The group continued performing until shortly before Whittaker’s death in 1993.

Throughout his life Early has held “regular jobs,” including forklift driver for a lumber company, Armstrong Tire factory worker and is an accomplished carpenter.

He has six children, including Hezekiah Jr., who is also a drummer.

For more information on the Delta Music Museum or the Hall of Fame ceremony go to deltamusicmuseum.com. or call (318) 757-4297. The Museum is open Wednesday through Friday from 9 a.m. until 4 p.m. and on Monday or Tuesday with advanced notice.

SATURDAY WAS a beautiful day for the Vidalia Mardi Gras parade. The event featured lots of b… Read more