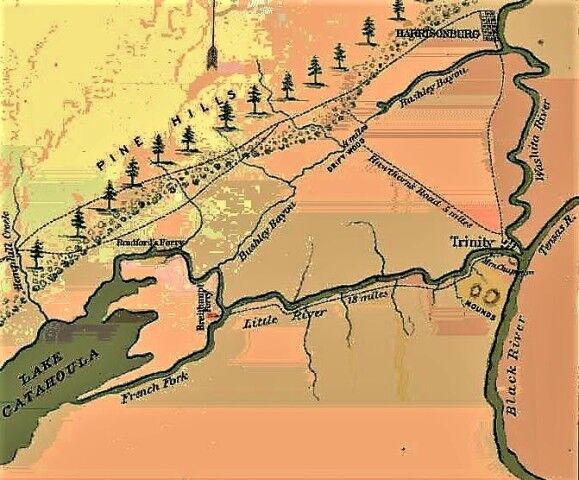 ST. JOHN Richardson Liddell drew this map of Catahoula Parish during the Civil War. Although it is not to scale, it provides a good view of the existing roads and waterways at the time. Little River flowed out of Catahoula Lake to Trinity at two locations – on the northeast side and on the south side along the French Fork channel. Travelers crossed the French Fork at Breithaupt’s Ferry (Archie) and crossed the Little River main channel at Bradford’s Ferry (Whitehall). 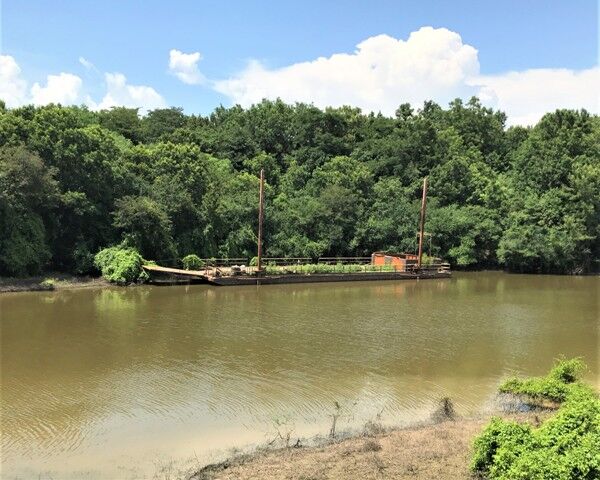 AN OLD barge rests on the northern bank of the French Fork channel of Little River a few miles from the site of Breithaupt’s Ferry, which operated during the 19th century at Archie. (Concordia Sentinel photo) 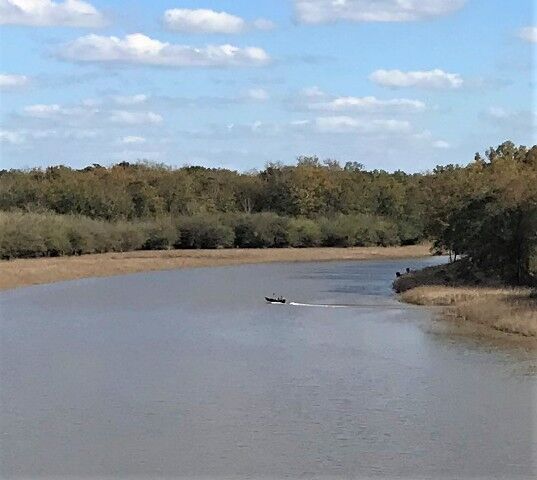 ST. JOHN Richardson Liddell drew this map of Catahoula Parish during the Civil War. Although it is not to scale, it provides a good view of the existing roads and waterways at the time. Little River flowed out of Catahoula Lake to Trinity at two locations – on the northeast side and on the south side along the French Fork channel. Travelers crossed the French Fork at Breithaupt’s Ferry (Archie) and crossed the Little River main channel at Bradford’s Ferry (Whitehall).

AN OLD barge rests on the northern bank of the French Fork channel of Little River a few miles from the site of Breithaupt’s Ferry, which operated during the 19th century at Archie. (Concordia Sentinel photo)

Liddell wanted peace but Jones did not.

Jones had come south to Catahoula Parish from Kentucky, arriving not long after Liddell, who was from Mississippi. Both men built plantations and residences along Black River during the 1840s.

Liddell’s Llanada Plantation was on the outskirts of present day Jonesville and stretched from Black River to Little River. Jones’ Elmly Plantation was four miles farther down the Black.

Jones and Liddell never liked one another and things went from bad to worse in 1847 when Eliza Nichols, a friend of the Liddell family, shot Jones in the face and back. Jones survived, but his wounds were serious. He blamed the incident on Liddell and never got over it.

Afterward, Jones and his wife Laura left the parish for an extended period during an overflow and a cholera epidemic. When the couple returned in April 1852, Jones’ number one priority was to kill Liddell.

Jones brought with him a man named Richard Pryor, apparently to serve as Jones’ hired assassin. At Elmly over the next few weeks, Jones and Pryor along with Samuel Glenn, Moses Wiggins and Henry Huntington plotted to kill Liddell.

R.G. Wooten and Felix Robb wanted to prevent a war. But two months after Jones returned home, Glenn and Wiggins -- not Liddell -- were dead. They were shot up as they traveled by carriage on the public road that ran beside Little River. Liddell confessed he was the shooter.

These killings launched the Black River War and ultimately resulted in the deaths of 14 men over 23 years, including the two adversaries, Jones and Liddell.

But the killing of Glenn and Wiggins did not come without great efforts to prevent it.

‘JONES WOULD NOT CONSENT’

During Liddell’s trial for the murder of Wiggins in 1854, both R.G. Wooten and Felix Robb explained on the witness stand the efforts they made to end the feud.

Wooten, a native of Georgia, testified that on one occasion he visited Jones at the request of Robb. On the witness stand, Wooten testified that “a settlement was proposed” between Jones and Maj. Liddell “through their friends. The settlement proposed by Mr. Robb, a friend of Maj. Liddell, was an amicable one” but Jones “refused to make any settlement” and “appeared quite violent when speaking of the matter.”

Wooten “endeavored to prevail” on Jones “to make a settlement as requested by Mr. Robb” but “Jones would not consent.”

On a subsequent trip to Elmly, Jones point blank asked Wooten if he would ask a local farmer to assassinate Jones for a fee of $1,500 to $2,000. Wooten was so shocked and outraged that he never visited in Jones’ home again.

‘THIS STATE OF THINGS’

Felix Robb testified that he tried more than once to settle the dispute after being asked by Liddell to seek a friendly resolution or that the matter be settled with a duel.

The 46-year-old Trinity merchant and postmaster was well liked and trusted. He would serve three years as sheriff beginning in 1856.

Twice in person and once in a letter, Robb sought resolution, but Jones would agree to nothing.

Liddell, Robb testified, was “anxious to have a settlement made – either to fight and settle the matter at once or drop hostilities by mutual agreement; Maj. Liddell is an honorable, high-minded man: Generally believed to be so in the community; a quiet, retiring man, stays much at home, attends to his own affairs and lets other people alone.”

Liddell and R.D. Percy had asked Robb to mediate the dispute. Percy farmed in Concordia Parish along the Tensas River. At the time of the shooting of Glenn and Wiggins, Percy was one of a handful of sugarcane producers. He was building the first sugar mill in the area. It was powered by a steam engine.

Robb testified that Jones claimed that Liddell “had once taken advantage of him and would again.”

Around the time of the Eliza Nichols’ incident, Jones had attempted to waylay Liddell on a road near Black River. Jones and his men also had made public statements that they intended to kill Liddell.

Robb told Jones that if he were Liddell he (Robb) “would consider himself bound” to kill Jones “through necessity to save his own life.”

Frustrated, Robb told Jones, “Charley, what in the name of God will you do then! You can’t both live here together in this state of things.”

R.D. Percy testified that “just after Jones waylaid Liddell below Trinity,” he “advised Liddell to have his friends about him, as there was danger that his house would be attacked.”

W.A. Bryan, the editor and publisher of The Independent, the weekly newspaper in Harrisonburg, wrote that Jones and his followers took every means possible to terrify the populace while harassing Liddell. The gang attempted to force residents to take sides with the stance that “if you are not with us then you must be against us.”

The object of Jones and his followers, wrote publisher Bryan, “has been at all hazards to get rid of him {Liddell}. As to how, and by what means this was to be accomplished, they seemed quite unscrupulous. To this end, hired ruffians and bullies were brought into the Parish, men in armed bands paraded the streets of Trinity, and rode up and down the banks of Little river, terrifying the peaceful inhabitants, intimidating the friends of Maj. Liddell and amid horrid oaths, offering to make bets that he would not be alive within a given time.

“Men whose pliancy was, it seems, poorly calculated upon, were freely offered gold to assassinate him, more than once he was waylaid by armed men, whose purposes were frustrated only by what seemed to be the interposition of Providence.”

Thomas Laningham, a 32-year-old Trinity merchant, Little River farmer and friend of Wiggins, testified about that very fact during the trial. He said a short time before Wiggins’ death that he and Wiggins had a brief conversation. Wiggins spoke of the “difficulty existing between Jones and Maj. Liddell.” Laningham told Wiggins that he “hated exceedingly the existence of that difficulty” and added that “things had got to such a pass now in the parish that a man was almost afraid to express his opinion about that difficulty, or even to think about it.”

Samuel Glenn was only 35 when he was gunned down by Liddell in 1852, but he had already become a fairly successful farmer. According to the 1850 census, Glenn owned 100 improved acres and 1,237 unimproved acres. The cash value of his Little River farm was $10,695.

Glenn owned livestock valued at $1,450 and produced 700 bushels of corn, 40 bales of cotton and 100 bushels of sweet potatoes.

Glenn’s father was one of the early settlers of Catahoula Parish. Black River planter Dr. Andrew Robert Kilpatrick in an article for Debow’s Review in the early 1850s wrote that Glenn’s father was one of the first to collect pine knots as fuel for steamboats on the Mississippi River. The elder Glenn took the steamboat ‘Ark’ up Little River to Catahoula Lake in the early 1840s and was the first to embark in “this business in earnest.”

The man accused of killing the younger Glenn in 1852, John Liddell, resided a short distance away on Black River. He owned 600 improved acres and 908 unimproved acres. The cash value of his farm was $15,080.

Liddell’s livestock was valued at $1,512 and he annually produced 140 bales of cotton, 15 bushels of Irish potatoes and 200 bushels of sweet potatoes.

According to author and historian Nathan C. Hughes (Liddell’s Record), Liddell by 1855 possessed 150 slaves including 15 from his mother’s estate and 125 purchased from his father.

In addition to crops, Liddell raised 65 horses and 80 head of cattle.

Up in the northern end of the parish at Sicily Island, Richard Norris’ farm was the largest in terms of value at $23,000. His livestock was valued at $4,370 and he produced 4,500 bushels of corn, six bushels of Irish potatoes and 46 bushels of sweet potatoes.

Liddell’s arch enemy, Charles Jones, was not in the parish when the census was taken in 1850 and therefore was not included.

After the shooting, Glenn’s widow, Sarah, took on the sole responsibility of rearing their five children, ages 11 to five months, including three girls and two boys.

Glenn’s grieving mother, crying over the dead body of her son, envisioned more bloodshed on the horizon. Her prediction was recalled in an 1870 letter found in the Judge James Gowan Taliaferro papers housed at LSU.

Mrs. Glenn prophesized in 1852 that the bodies of Liddell and Jones would suffer “as many shots” as her son and that neither of the two antagonists “would die a natural death.”

She would be right.

(Next Week: Chaos in Trinity)