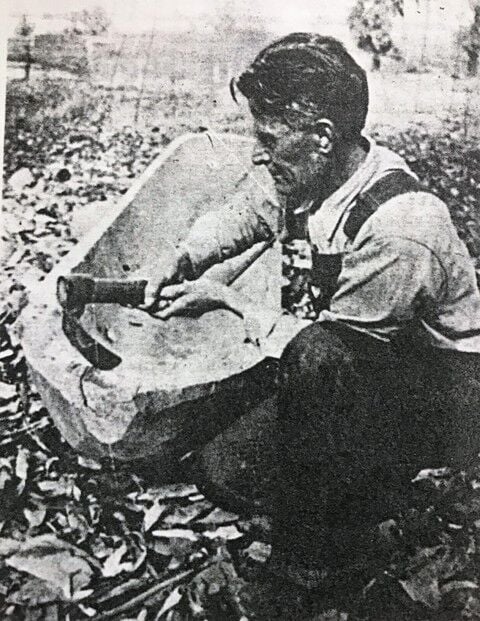 EMERICK SANSON, shown on Catahoula Lake in the 1930s, was one of the last builders of the dugout log canoe – known as a pirogue. It was a craft perfected by skilled Native Americans who would take a single log – most often cypress – and carve out a dugout up to 35-feet long. Sanson incorporated techniques of his French ancestors who arrived at the Rapides Post (Alexandria) in the 1790s. (Credit: Louisiana Studies) 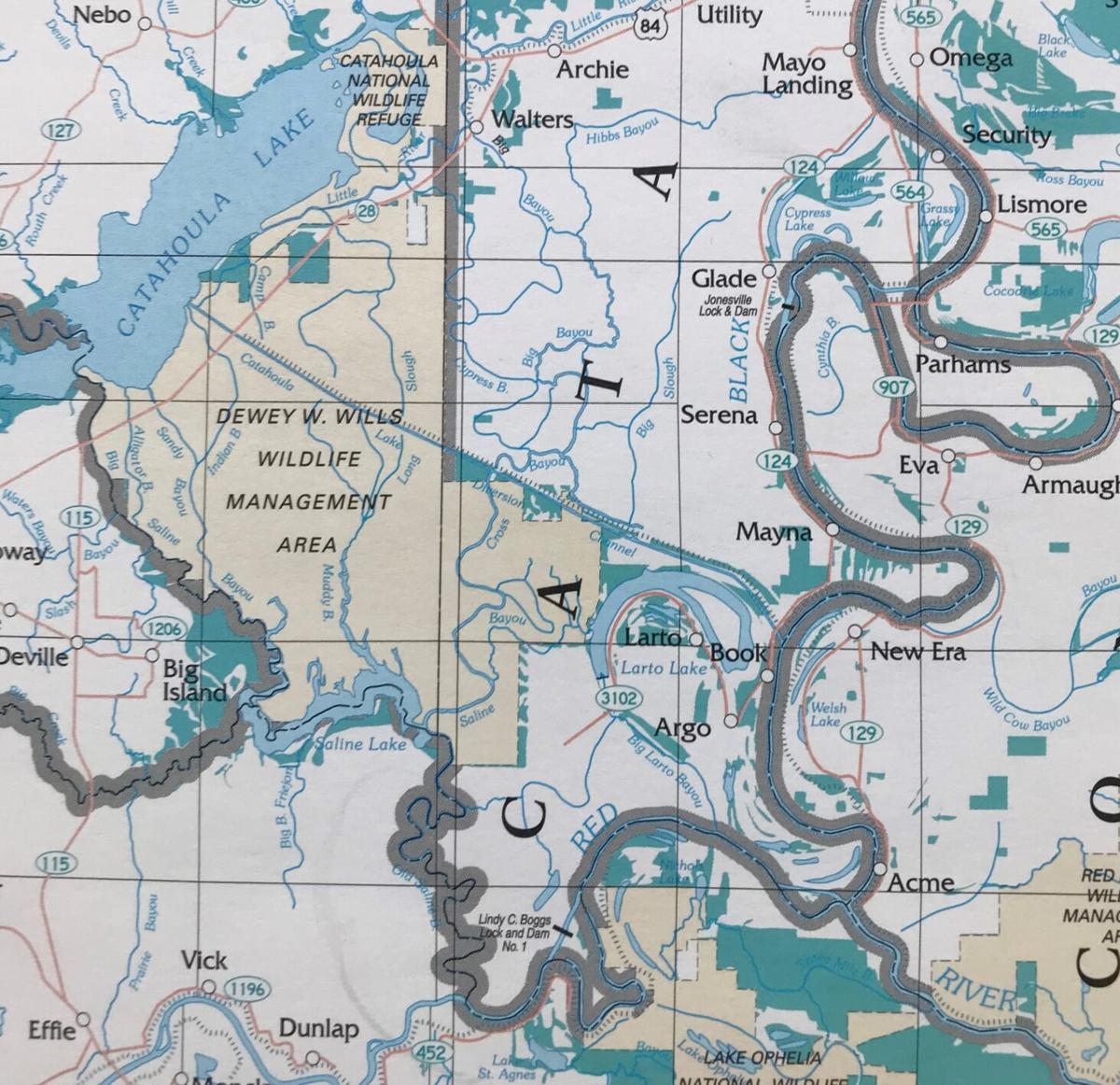 FROM CATAHOULA Lake to Larto Lake to Black River live many families of French and Native American descent. The late Emrick Sanson, of French and Indian descent, was one of the last pirogue builders on Catahoula Lake in the 1930s. To the east along the juncture of the Black and Red rivers lived Joseph Delhoste, who moved there in the mid-19thcentury. Delhoste and his wife left France for New Orleans in the 1830s. Around 1850, they settled at the juncture of the Black and Red where Delhoste founded the Concordia Parish community of Acme, which means “summit” or “high point.” 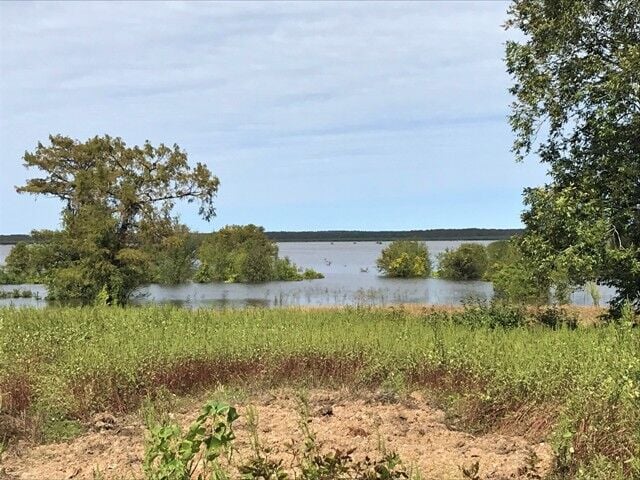 EMERICK SANSON, shown on Catahoula Lake in the 1930s, was one of the last builders of the dugout log canoe – known as a pirogue. It was a craft perfected by skilled Native Americans who would take a single log – most often cypress – and carve out a dugout up to 35-feet long. Sanson incorporated techniques of his French ancestors who arrived at the Rapides Post (Alexandria) in the 1790s. (Credit: Louisiana Studies)

FROM CATAHOULA Lake to Larto Lake to Black River live many families of French and Native American descent. The late Emrick Sanson, of French and Indian descent, was one of the last pirogue builders on Catahoula Lake in the 1930s. To the east along the juncture of the Black and Red rivers lived Joseph Delhoste, who moved there in the mid-19thcentury. Delhoste and his wife left France for New Orleans in the 1830s. Around 1850, they settled at the juncture of the Black and Red where Delhoste founded the Concordia Parish community of Acme, which means “summit” or “high point.”

In 1804, a Frenchman traveling the rivers from New Orleans to present day Monroe reported a new era was dawning in Louisiana. The man was traveling with several others in a big pirogue powered by oarsmen and led by their captain.

In the years after the Louisiana Purchase of 1803, early settlers along the Black River separating Concordia and Catahoula parishes began to arrive on flatboats. They were looking for fertile land to farm and a new beginning to life.

The rivers were important to the settlers not only as water highways and sources of food for the table, but in the years to come commercial fishing would help fuel the economy.

As the Frenchman – C.C. Robin – entered the Black River at its juncture with the Red in lower Concordia Parish, he came to believe that the “boatmen peddlers” would come to supply the settlers locating along Louisiana’s interior rivers with the things they needed but could not provide themselves.

Some of these merchants were already in operation, serving several small settlements farther south from below New Orleans northward to Point Coupee. The boatmen peddlers out of New Orleans provided “sugar, coffee, tafia, china and some clothe goods” to trade for “chickens, eggs, tallow, lard, hides, honey, bear-oil, corn, rice, beans … anything they can sell in town,” according to Robin in his book on Louisiana.

In the years to come, one boatman peddler, also a native of France, decided to make his home in Concordia Parish. When he had first arrived at the juncture of the Red and the Black rivers, he liked what he saw.

“In the southwestern tip of Concordia Parish, where the Black and Red rivers meet and where Concordia faces Catahoula and Avoyelles, is the community of Acme,” wrote the late Bea Nathanson in the Concordia Sentinel in a two-part series in 1975. “Where the Black empties into the Red … when the rivers are low, a strong man – so the saying goes – can throw a rock into either Catahoula or Avoyelles.”

Nathanson wrote that before the construction of a ring levee around the parish and before the advent of the soybeans in the 1960s and 1970s, “the land was of the primeval forest, and Acme was in the heart of the sump area, a natural reservoir into which drained the surplus waters of the Mississippi River and its tributaries through heavy spring floods.

“During all but the worst of these times, Acme, with its 50-foot MSL elevation, stuck up out of the terrain like a sore thumb, when the swamps around it, which are as much as 15 feet lower, were covered with water.”

From the time of Joseph Delhoste’s arrival in 1850 until the massive land clearing to plant soybeans in the 1960s and 1970s, “hogs and cattle roamed this range, and nobody cut down the trees except to clear a little land for a home or garden because the woods provided mast for the animals free of charge.”

Concordia native and anthropologist Hiram “Pete” Gregory noted in an article forFolklife in Louisiana that behind the plantations down in the Cocodrie swamps “there were lots of deer – are still – but that was land that didn’t get hogged over. All along Black River, people raised hogs, bunches and bunches of hogs, and the deer populations diminished as the hog populations went up.

“They had cattle in the woods, too, so they had a whole swamp economy based on cows and hogs. Mostly that’s what they did. Some of them commercial fished, too, but most of them raised cattle and hogs.”

According to family history and census records, Joseph Delhoste was born in France in 1811. In 1835, when he was age 24, he and his wife, Josephine, departed Bordeaux for America. They traveled for three weeks on the brig “Comet,” arriving in New Orleans in February.

They settled on the west bank of the Mississippi in what is now Gretna. According to the 1850 census, Joseph and Josephine had five children. Joseph was listed as a grocer.

During the 1840s, Joseph Delhoste also became involved in the boatman peddler trade. A steam engine powered his barge up the Mississippi and then into the Red River in lower Concordia Parish. The barge featured a grocery store on the front and living quarters in the rear.

His route took him up the Red to Natchitoches. Around 1850, he decided to make his home at the juncture of the Red and Black rivers.

Records indicate he bought approximately 40 acres of land and upon arrival, according to Bea Nathanson’sSentinel article, “chopped down the cane that was growing wild on the banks of the river and built a rough home site.”

During the early years in Concordia Parish, he built a trade store, gin and cotton warehouse. He also built a coal chute to fuel steamboats operating the New Orleans to North Louisiana trade.

Nathanson wrote that Joseph and Josephine “raised cattle and hogs on the range, had a vegetable garden and managed to supply themselves with the necessities of life, ordering what they couldn’t provide locally out of New Orleans to be delivered by the steamboats.”

Commercial fishing, like farming and ranching, would become important to the economy and part of the lifestyle of many along the rivers.

“There was a lot of commercial fishing on Black River, some on the Mississippi River,” according to Hiram “Pete” Gregory inFolklife in Louisiana. “Jonesville was probably one of the bigger commercial fishing centers in the South and that was because of the railroad … because they could bring fish up there and ice them and ship them.

“The first ice house was in Natchez, the closest one, and it belonged to an Irishman named Kerrigan … he built it down under the hill and they’d pick up the ice, load it in the boats, and cover it with sawdust, then carry it down the river and unload it and carry it on wagons down into the swamps of Concordia Parish.

“The first fish boats to come to Jonesville came from Simmesport and the first big ice house on the upper Atchafalaya spawned whole fleets of boats buying bunches of fish, so it was all tied to the Atchafalaya fishing.”

The first boats used to travel the rivers were pirogues and when Gregory was 12 years old he met one of Louisiana’s last pirogue builders. Gregory’s mother drove him to Catahoula Lake to meet Emrick Sanson. At the time, the water was high and had cut off the road to Sanson’s house, so Gregory had to wade through water the final mile to the residence.

Gregory and the Sansons became fast friends, and Gregory would spend many of the summers during his teenage years at the Sanson’s home, watching the family work and exploring the lake.

According to Gregory’s article inFolklife in Louisiana:

“At Stock Landing on Catahoula Lake, the Sanson family continued to build cypress log dugouts or pirogues until the late 1930s. Punt-ended, those boats were more Indian than the sharper pointed versions seen further south. A very fine example of their work is in the museum at DeSoto National Park at Hot Springs, Arkansas.

“These cypress dugout canoes—not the tiny pirogues but sizable boats—have disappeared. Emerick Sanson was one of the last active builders. His family, of French and Indian descent, lived on French Fork of Little River since the 1700s. His round adze was forged from a French cane hoe made at the colonial post at the rapids on Red River. He still used the traditional cross-wedging to keep the handle in place and used an English foot adze of more recent origin.

“Young family members learned to carve toy dugouts of cypress or cedar. They not only learned the forms, but the basic mechanics of boat building as well. What was done with a pocketknife was much like what was done with the adze.”

Sanson used the tille ronde handed down from his father and previous generations. Sanson's came from a cane hoe made by his French ancestor, M. Belgard, at the Rapides post (Alexandria) in 1790.

Ten years after settling at the place he named Acme, Joseph Delhoste was dead.

According to family history, in 1860, around the outbreak of the Civil War, he had traveled to the courthouse in Vidalia to testify against cattle rustlers.

On his way home, he was ambushed and killed, apparently by some of the men, or their allies, that he had testified against.

While the Delhoste family would carry on, more trials would come when federal gunboats arrived at the juncture of the Red and the Black rivers.

(Next Week: The Civil War)