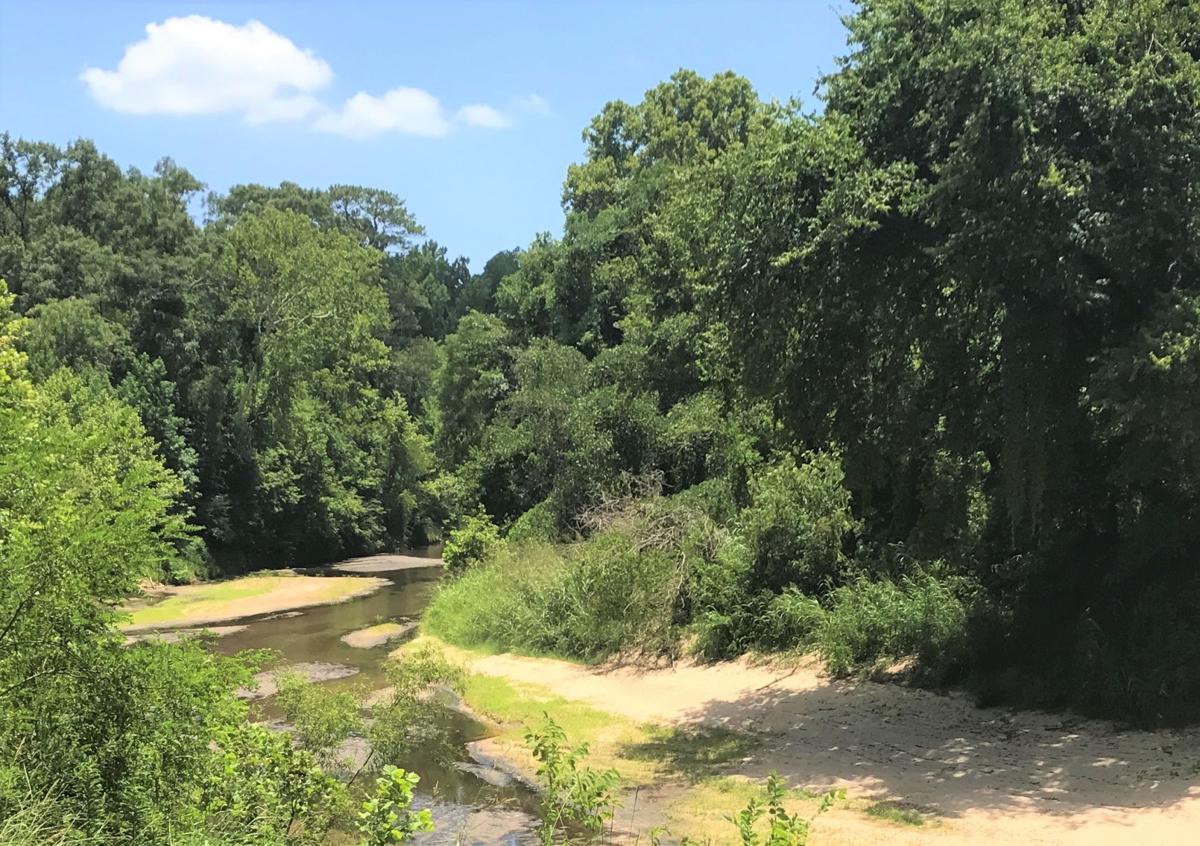 JUDGE PETER Bryan Bruin, during his horse ride from Bruinsburg in Claiborne County to the Mississippi Territory capital of Washington in Adams County, was a hard day’s ride. Along the way, Bruins crossed Coles Creek in Jefferson County. (Concordia Sentinel photo) 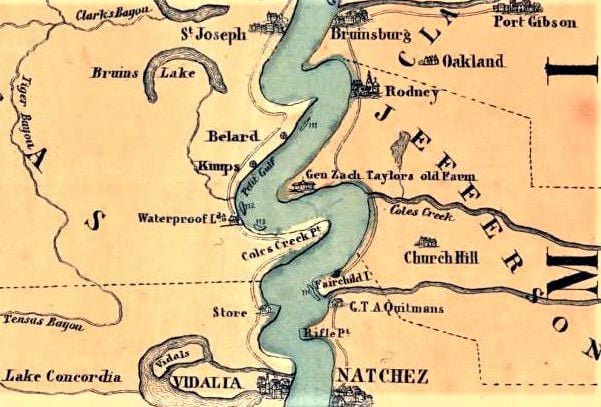 NATCHEZ AND the village of Washington six miles to the east were the busiest places in Mississippi Territory during the early 1800s. This map was prepared during the Civil War, five decades after the territorial era of Mississippi. (Credit: Lloyd’s Map of the Lower Mississippi River, J.T. Lloyd, Publisher, 1862, New York)

JUDGE PETER Bryan Bruin, during his horse ride from Bruinsburg in Claiborne County to the Mississippi Territory capital of Washington in Adams County, was a hard day’s ride. Along the way, Bruins crossed Coles Creek in Jefferson County. (Concordia Sentinel photo)

NATCHEZ AND the village of Washington six miles to the east were the busiest places in Mississippi Territory during the early 1800s. This map was prepared during the Civil War, five decades after the territorial era of Mississippi. (Credit: Lloyd’s Map of the Lower Mississippi River, J.T. Lloyd, Publisher, 1862, New York)

In the early 1800s, Judge Peter Bryan Bruin's journey from the community of Bruinsburg along Bayou Pierre in present day Claiborne County, Miss., to territorial court in the Adams County village of Washington, was a distance of 45 miles, more or less, through hills and hollows.

He arose early the day before court convened, saddled his horse, grabbed his flintlock, and began the long ride south.

From his home on an Indian mound near the present-day ruins of the Windsor mansion a short distance from Alcorn College, the trail led past several landmarks beginning with the Glasscock farm, known for its fine peaches. A short distance away was an old cabin occupied by a man named Ostum, a shoemaker from South Carolina.

Next was the James Norris farm where several other South Carolina immigrants, half a dozen families in all, lived nearby. The trail passed a few plantations before reaching Greenville, then the capital of Jefferson County, situated on the middle branch of Coles Creek and surrounded by small farms and woods. Located six miles west of present-day Fayette, Greenville then was a village of 40 houses, a church, courthouse, jail, pillory, post office, two taverns and an apothecary's shop.

A mile from Greenville, the trace crossed a deep spring-fed ravine where women washed clothes. Two miles southward Bruin came upon the plantation of Colonel Cato West, who cultivated 200 acres of corn and cotton. Two miles farther was Parker Carradine's apple and peach orchards, said to be one of the most beautiful sites in Natchez country.

Next on the journey was Uniontown, a community of three or four houses. Six miles distant the road reached Selsertown (near Emerald Mound), a village of ten small houses, three of which were taverns. From there to Washington six miles southward the countryside became more and more populated.

Despite the hard edge of the frontier, this was a day of public dinners, weddings and banquets. At major social events, the leaders of the territory had cocktails and talked politics.

Judge Thomas Rodney, one of Bruin's colleagues on the court, arrived in Washington in 1803. He found the community an "indifferent looking little place in which scarcely one house was finished." But quickly it grew into a village of 30 houses, three taverns, one apothecary shop, a jail, Fort Dearborn and Jefferson College.

Nineteenth Century Mississippi historian J.F.H. Claiborne said Washington was the place to be for all for aspiring men and their families.

There and at Natchez six miles west were many hotels and boarding houses. The most popular boarding houses of the day were Towson's, Bennett Truly's and Mrs. Buck's.

A 60-year-old widower from Delaware, Judge Rodney was a social butterfly. He was invited to every social event and often chosen by territory leaders to perform the ceremonies uniting their children and fiancés in marriage.

When Bruin was appointed by President John Adams to one of the three judgeships, he had no education as a lawyer although at the time no "particular training was required of a lawyer," according to William Baskerville Hamilton, who studied the Mississippi Territory early court system. A lawyer "had to be licensed by the governor, who usually did so after there had been some kind of examination by a judge or members of the bar."

One of the most news-making cases Bruin heard while on the territorial court came not long after he took office in the fall of 1798. Philip Nolan, well known in Natchez and wed in 1799 to the daughter of a wealthy Natchez merchant, put the word out that he was planning his fourth trip into Spanish Texas to hunt for wild horses.

The mustangs ran in enormous herds of thousands, but the Texas prairies were wide. Locating the herds sometimes took a while. Once found, Nolan drove the horses in small numbers into a coral, broke them, and once he had several hundred head, drove them back to Natchez or New Orleans to sell, most often to the Spanish military. Nolan also raised a few head on land he owned along the Homochitto River near Fort Adams in Wilkinson County.

Natchez had become an American territory in 1798 after almost two decades of Spanish rule. Louisiana and Texas, however, were still in Spanish hands and to go west a passport was required from Joseph Vidal at the Post of Concord, now known as Vidalia. Vidal had heard about Nolan's proposed trip and protested. The Spanish were especially sensitive to the unyielding westward migration of American settlers.

The Mississippi territorial court was called into session at the request of Gov. Winthrop Sargent to hear Vidal's complaint. Bruin and the other judges found no evidence that Nolan had designs to harm the Spanish or its possessions although Vidal estimated the expedition would include up to 40 armed men, a potentially dangerous force for frontier soldiers to confront.

Most of Nolan's men, about two dozen in the end, were armed with carbines and pistols. Nolan himself carried a double barrel shotgun, a carbine and a brace of pistols. He told the judges the weapons were needed strictly for defensive purposes.

Vidal argued Nolan was presenting the court an outdated Spanish passport as authorization. But Bruin and Judge Seth Lewis told Vidal they didn't have the constitutional authority to stop U.S. citizens from leaving the territory, especially, said Judge Seth Lewis, when "it cannot be proved with evidence that their intentions are hostile."

Knowing that the Spanish would oppose the expedition, Nolan crossed the Mississippi River into Louisiana miles upriver from Natchez. Soon the Spanish picked up his trail and followed him into Texas where months later Nolan was cornered and killed in a gunfight. Most of Nolan’s men were captured and imprisoned for life in Spanish prisons in Mexico. One man was executed.

Bruin liked Nolan. Both were Irish. In 1797, Nolan had visited Bruin at his home on Bayou Pierre. Although Bruin had enjoyed a good relationship with the Spanish, his loyalty was to the U.S. Bruin had served eight years in the Continental Army during the Revolutionary War, six months of that time in the living hell of a British prison ship.

This new American court considered a variety of issues during the frontier era. In the early days, Gov. Sargent and three judges also represented the legislative body and enacted laws.

According to historian Robert V. Haynes: "From the beginning, territorial law provided such punishments as ... whipping, branding, placing in stocks and fines up to $1000, for most minor crimes. Capital punishment was mandatory for murder, rape, stealing a slave, selling a freed man into slavery, robbery, burglary and counterfeiting and for slaves and their accomplices who incited an insurrection or plotted to kill or rebel."

Many cases, however, involved theft, assault and battery and property disputes.

In 1806, the court heard the case of Peter Tyler, who was charged and convicted of horse stealing. His sentence? A hot iron with the letter “T” (meaning thief) was branded on Tyler’s left thumb. Sometimes a horse thief received 50 lashes, sometimes more.

In another case, James Cole, for reasons unclear, was furious at a U.S. Army officer named Simeon Boland. The two men were stationed at Fort Dearborn in Washington.

One day, while both men were off duty and away from Fort Dearborn, Cole followed Boland on the Natchez-Washington road. Soon he picked a fight by striking Boland's mare several times with a whip two feet long and thicker than a man’s thumb. Boland warned Cole, described as a "quarrelsome man," to stop. Otherwise, Boland warned he would retaliate. When Cole's whip struck Boland's mare again, Boland raised his whip and struck Cole.

Cole retaliated with his whip, then with his fist and finally with the butt of his whip. Three witnesses backed this account. One said Cole had remarked earlier that he (Cole) "would not obey him (Boland) as an officer."

Graduation ceremonies are slated at four parish high schools next week, according to Superin… Read more