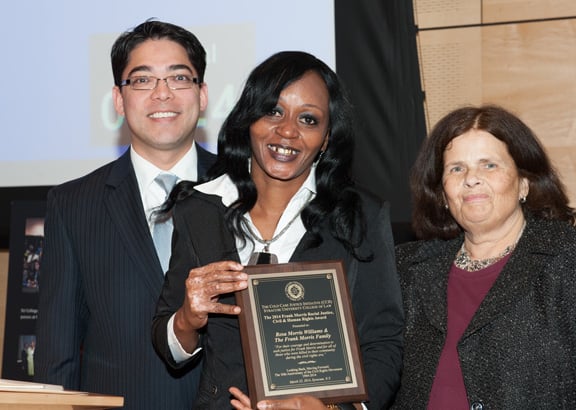 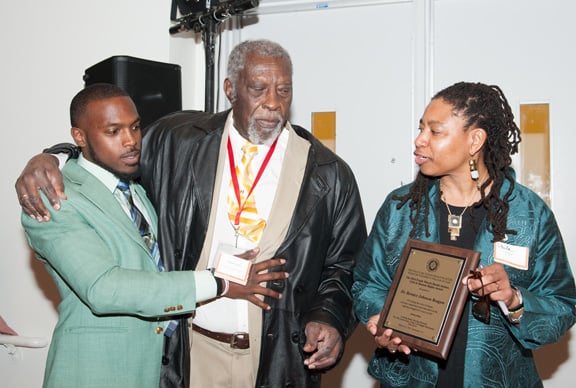 The family of Frank Morris and Ferriday’s Robert “Buck” Lewis Jr. were honored March 22 at a program presented by the Syracuse University College of Law Cold Case Justice Initiative (CCJI).

At the conference, law professors Janis McDonald and Paula Johnson, the co-founders of CCJI, announced the creation of the Frank Morris Racial Justice, Civil & Human Rights Award. The award bears the name of the Ferriday shoe shop owner who was murdered by Klansmen in 1964. His case, reopened by the U.S. Department of Justice in 2007, was closed earlier this year. Although a grand jury looked into the Morris murder beginning in 2011, no one was ever charged in the murder. CCJI says it will continue to investigate.

CCJI was created in 2007. McDonald and Johnson, and Concordia Sentinel editor Stanley Nelson, have worked together on the Morris case and other local cold cases for the past seven years. CCJI has expanded its work to include investigations into scores of Civil Rights-era cold cases throughout the South.

Darlene Morris-Newvill, the great-granddaughter of Morris, took part in a panel discussion on her great-grandfather’s case during the conference. She also accepted the Frank Morris Award on behalf of her mother, Rosa Morris-Williams, and the Morris family, for “their courage and determination to seek justice for Frank Morris and for all those who were killed in their community during the civil rights era.”

Robert “Buck” Lewis, 76, who took part in a panel discussion on the Civil Rights Movement at the conference, was among the founders and served as president of the Ferriday Freedom Movement (FFM), which was affiliated with CORE (Congress for Racial Equality). The group published a newsletter and worked to gain equal rights and equal access for African-Americans.

The Klan targeted Lewis for his activism shortly after FFM was formed. In November 1965, Lewis’ Ferriday home was bombed while he, his wife and their five children were inside. Though no one was injured, the gasoline bomb damaged the front of Lewis’ house and several windows were shattered.

When Lewis emerged from the house with a shotgun to defend his family, he was arrested by police and charged with aggravated battery although he neither attacked nor threatened anyone.

Lewis was held in the parish jail in Vidalia for 17 days. When released, he was delivered safely home by members of the newly formed chapter of the Deacons for Defense, which was organized in Jonesboro, La., in 1964 to protect black neighborhoods from Klansmen. The Deacons loaded Lewis into their car and drove through a roadblock set up by armed Klansmen in Vidalia. Klansmen’s attempt to overtake the vehicle on the Ferriday-Vidalia highway failed.

An article on the attack on Lewis was featured in The New York Times. Lewis’ shotgun, seized by police on his arrest, was never returned.

Lewis was honored with the Frank Morris Award for “his courage and protection during the Civil Rights Movement and for his continuing inspiration to create a just world.”

Another cold case family recipient of the award were Shelton Chappell and the entire Johnny Mae Chappell family. The Klan murdered Mrs. Chappell, a 35-year-old wife and mother of 10 children, in March 1964 in Jacksonville, FL.