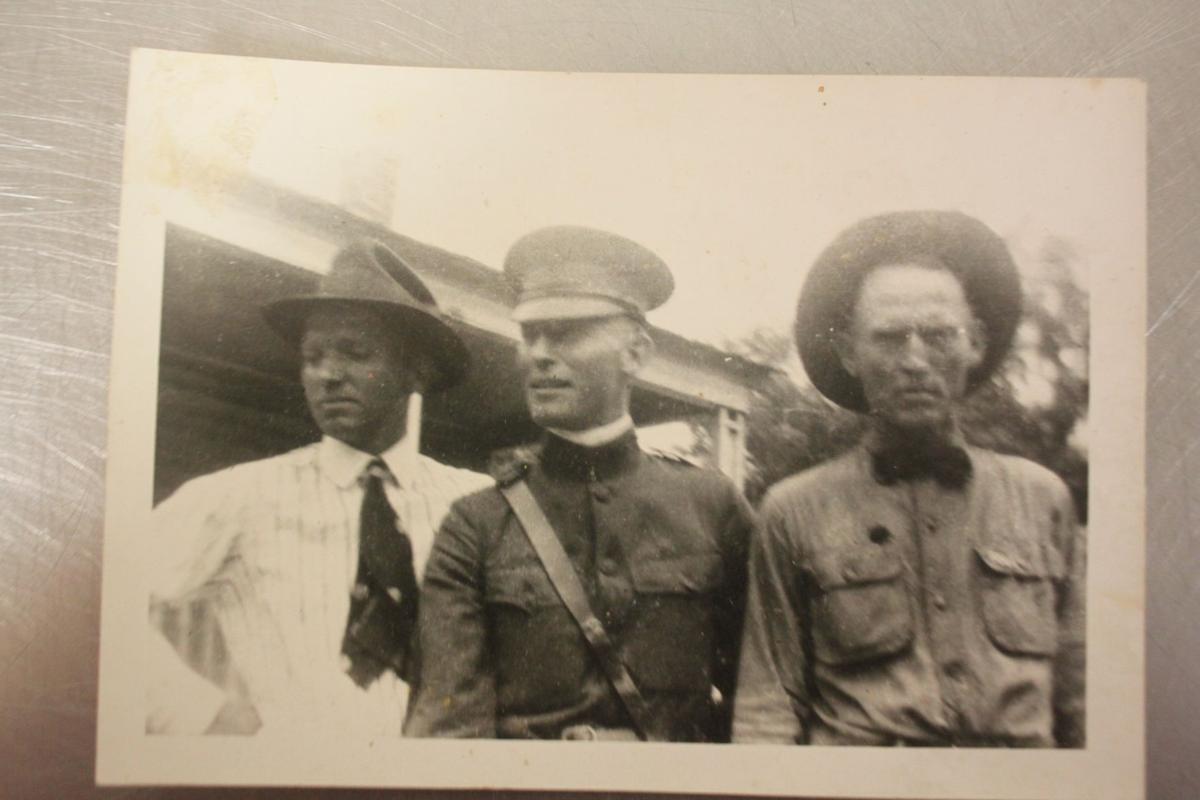 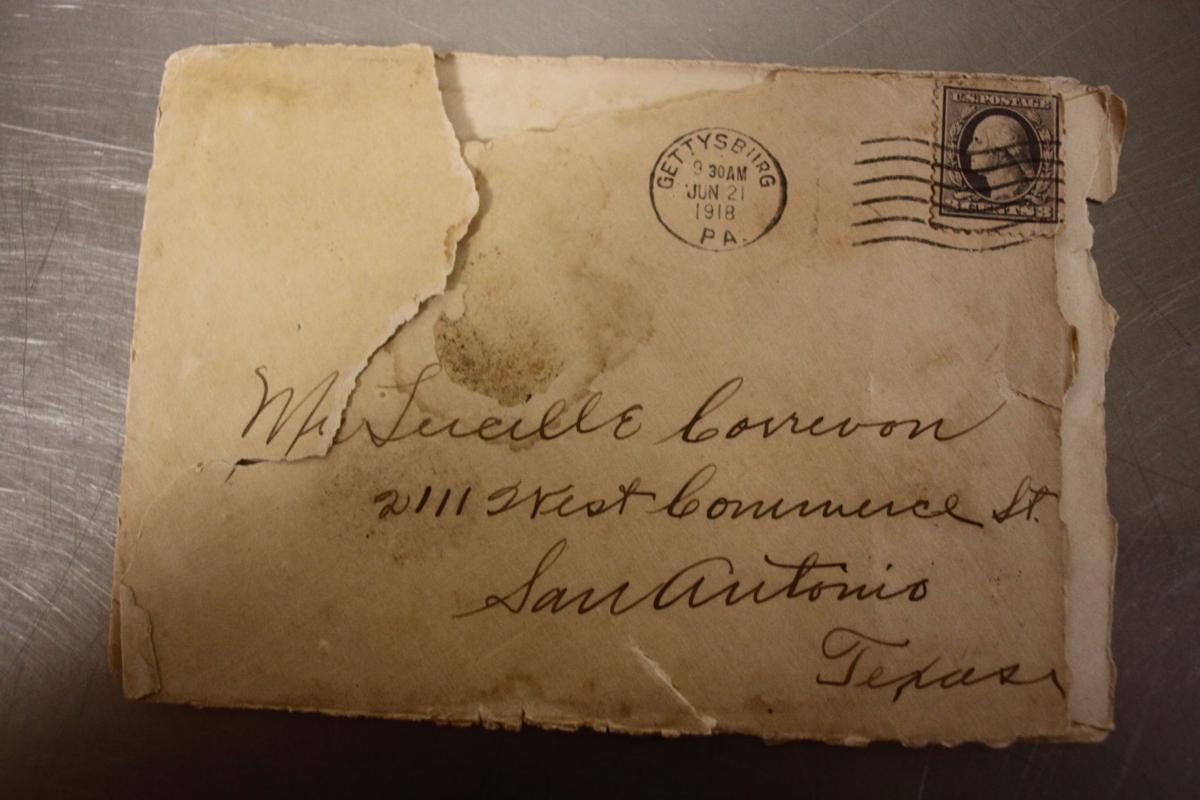 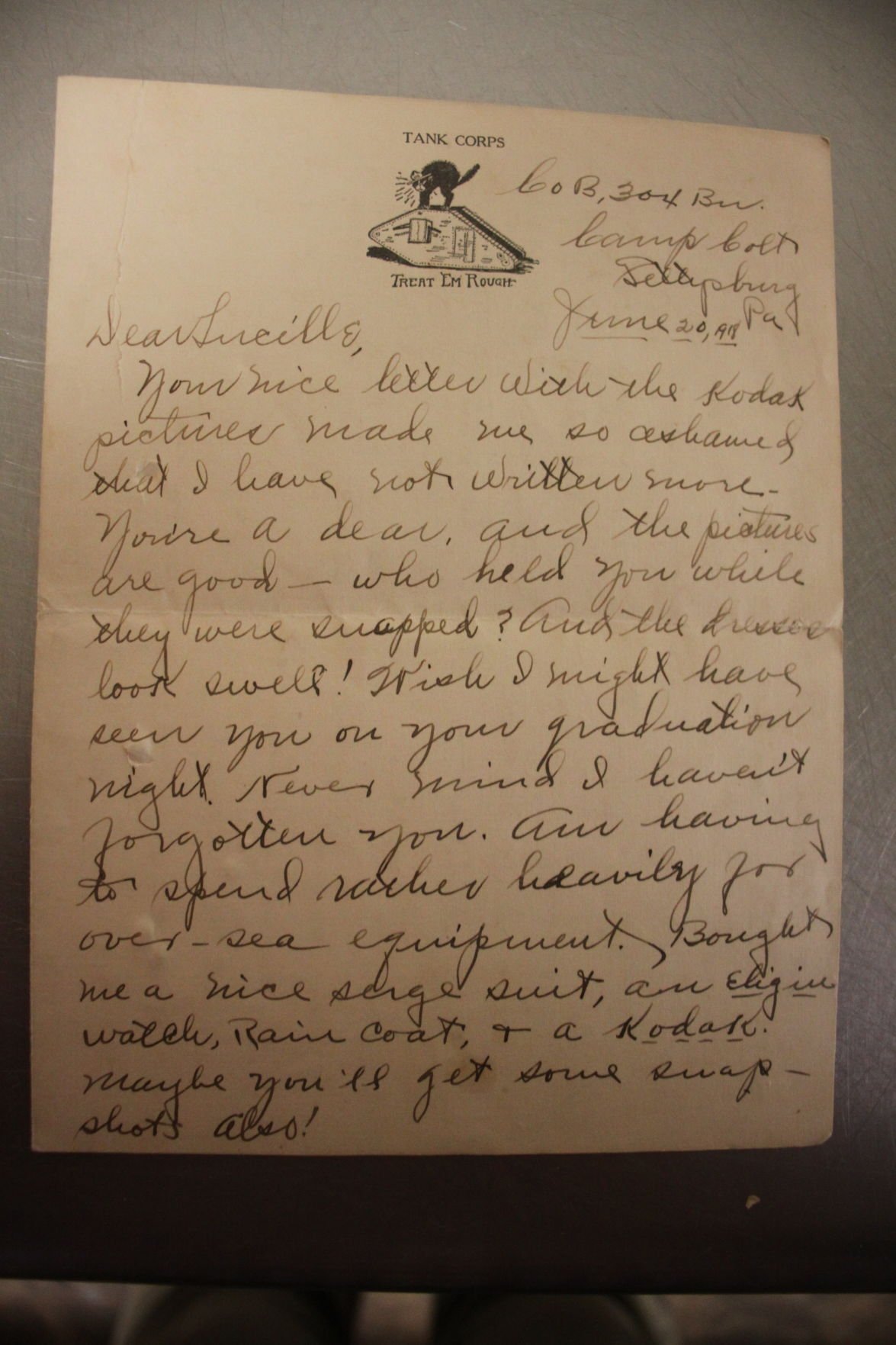 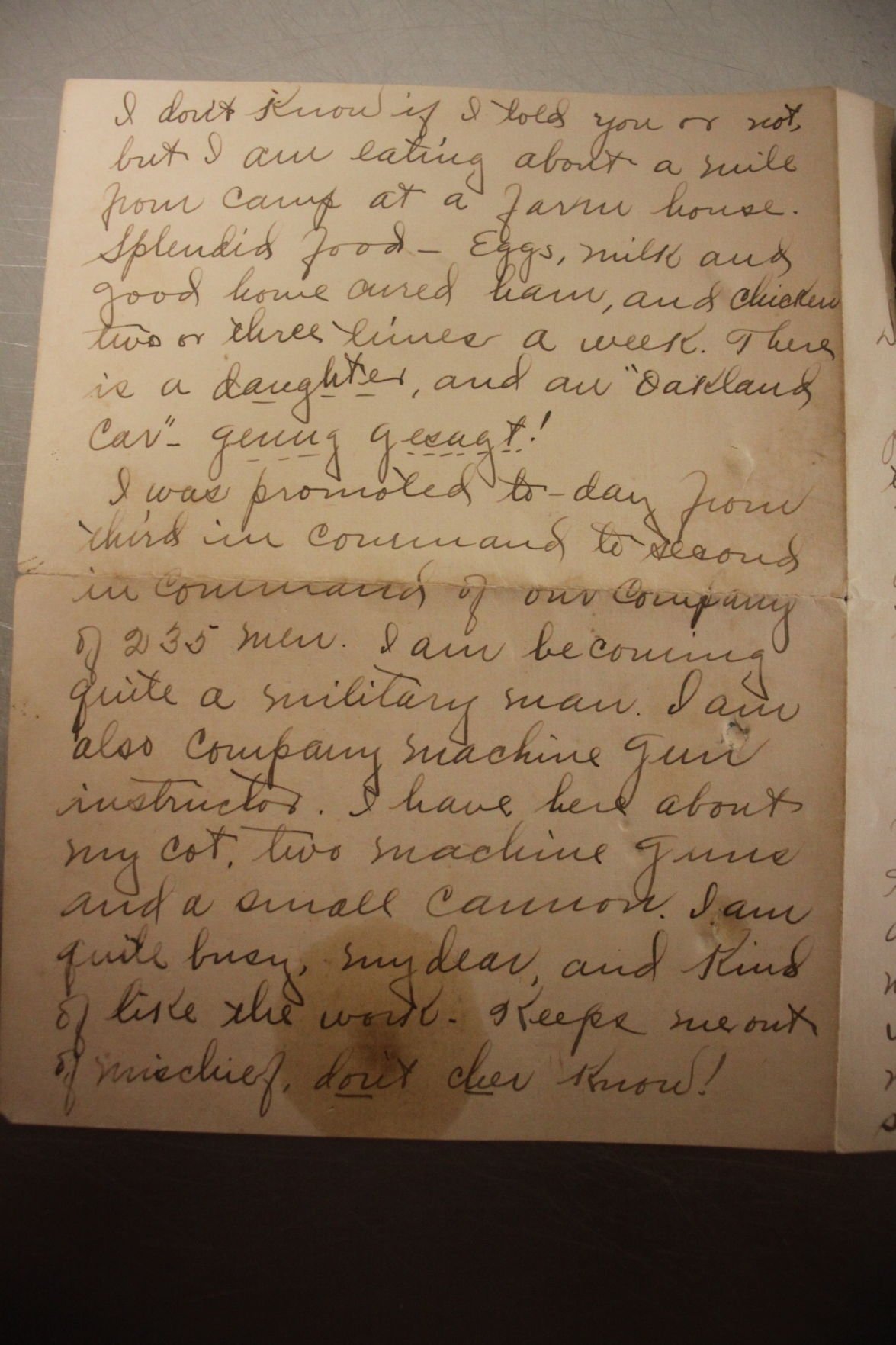 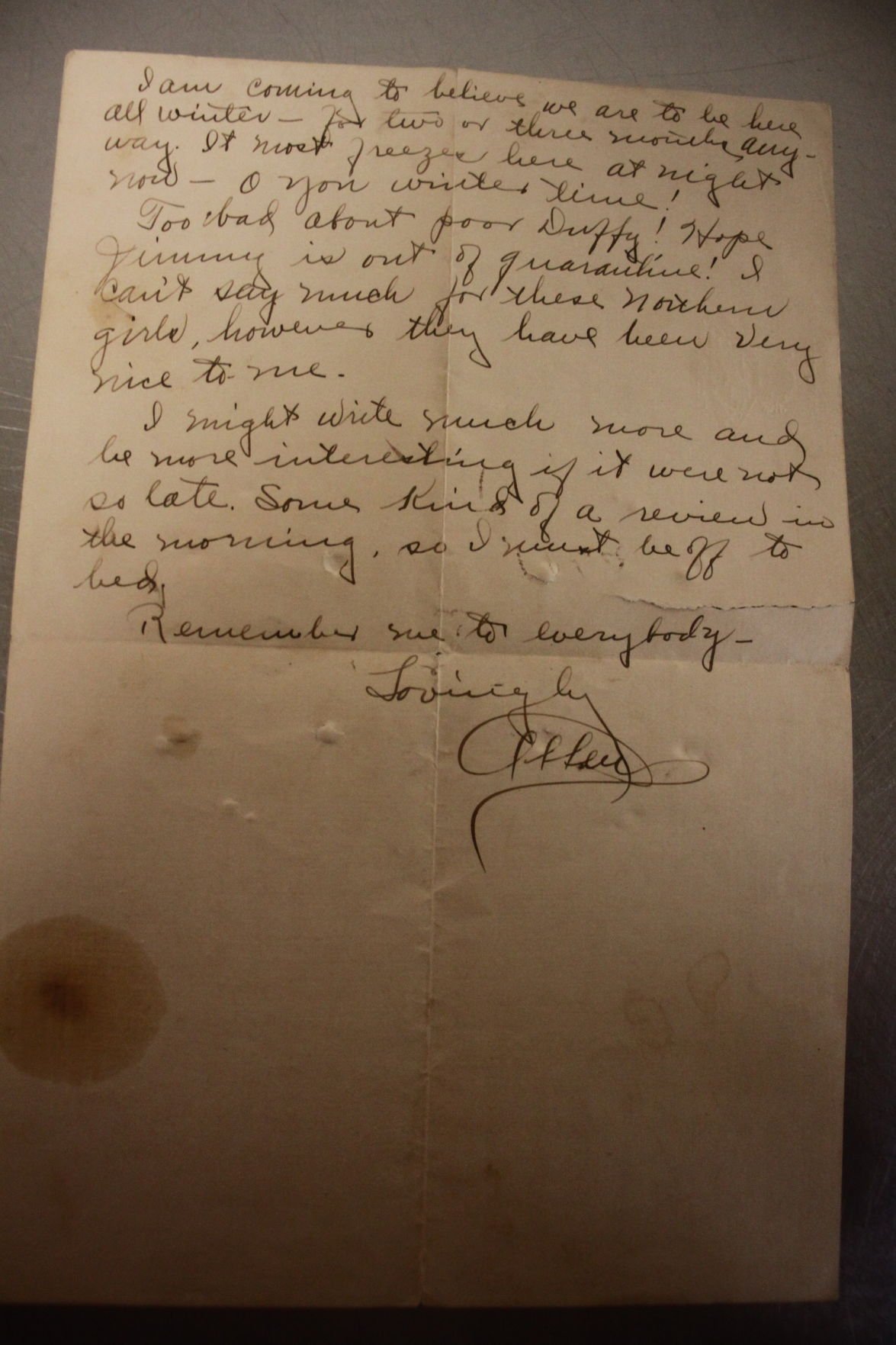 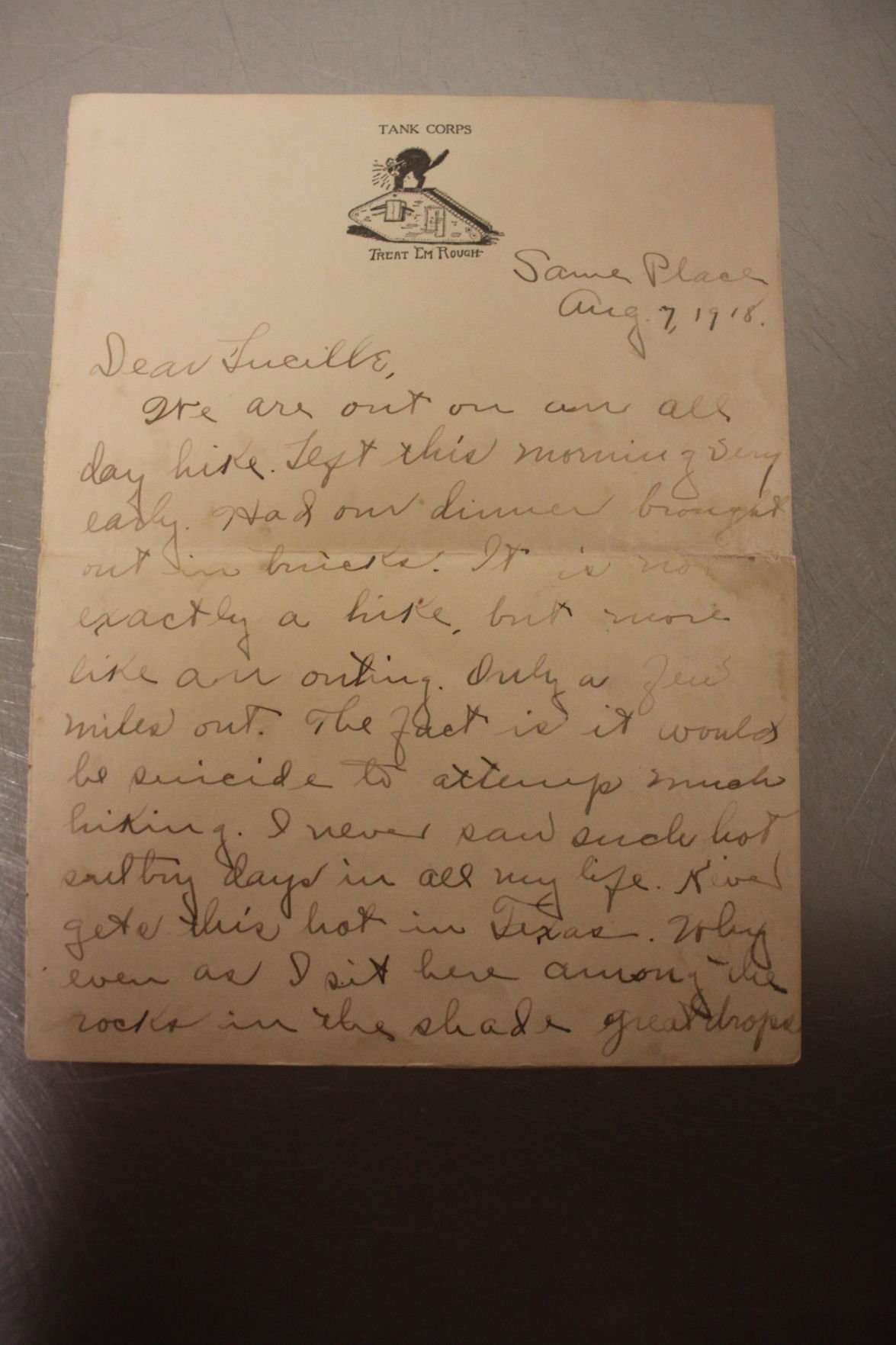 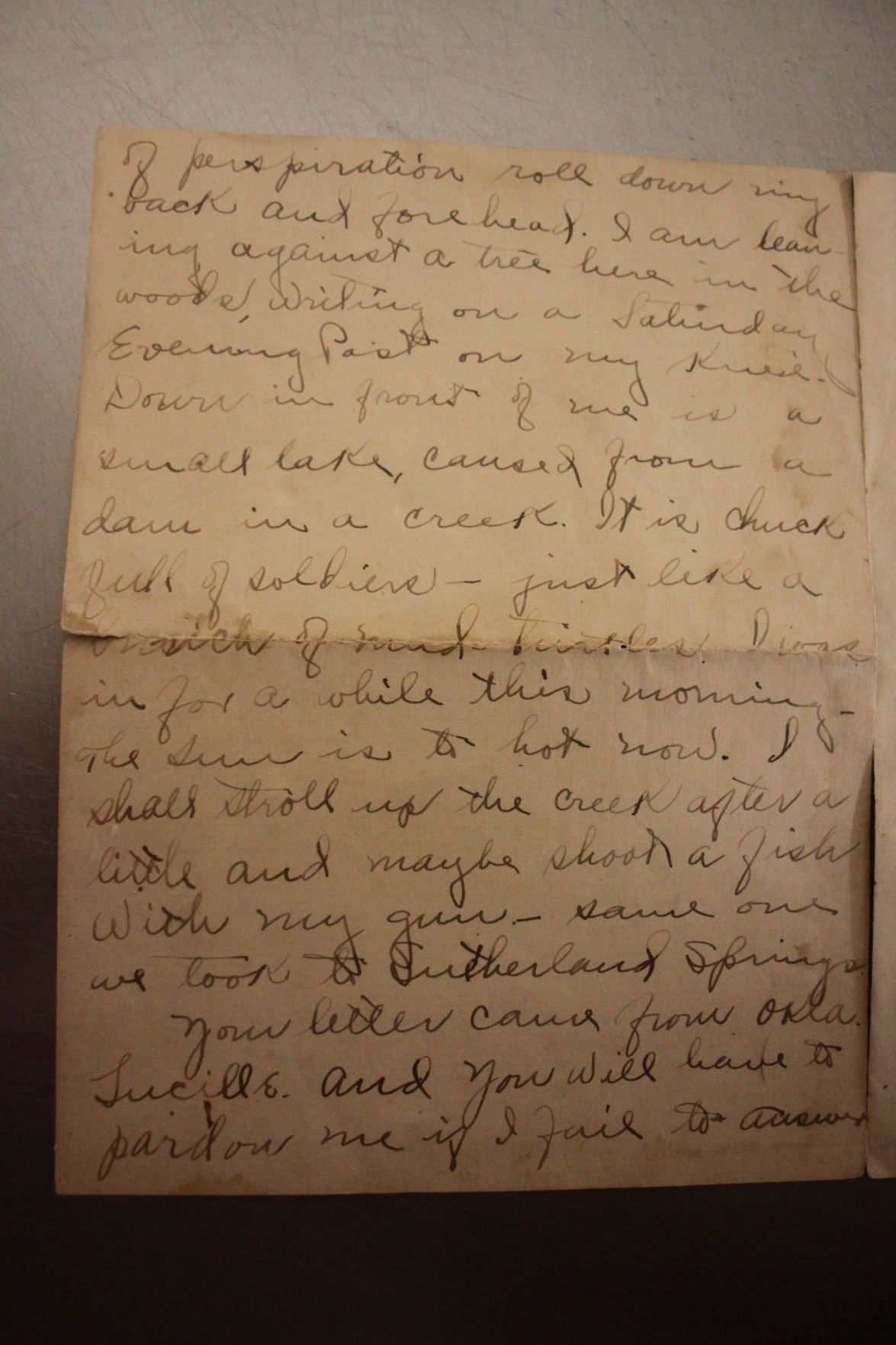 Editor’s note: Many thanks goes out to Lou Bufkin of Delhi, formerly of Gilbert. She recognized the picture of her uncles and grandfather on Monday morning. Bufkin is a teacher at Family Community Christian School.

Two letters and a picture dating to 1918 were found by Heather Ezell, of Gilbert, while working in one of Joel Ezell’s (her father) properties.

The letters were written to Lucille Correvon of San Antonio, Texas by Allen Turner who was second in command of his company that contained 235 men at Camp Colt near Gettysburg, Pennsylvania.

Turner eventually married Correvon, and the couple moved back to Gilbert where they would live the remainder of their days. Turner ran a machine shop for many years in the south Franklin community.

“I am becoming quite a military man,” Allen wrote to Correvon. “I am also company machine gun instructor. I am quite busy my dear, and kind of like the work. Keeps me out of mischief…”

There were similarities from 1918 and present. In the first letter dated June 20, 1918, Allen asked Correvon about acquaintances.

“Too bad about poor Duffy!” Allen wrote. “Hope Jimmy is out of quarantine!”

As the pandemic loomed in the near future for Allen, he wrote conditions at the camp were pleasant in the first letter.

“I don’t know if I told you or not, but I am eating about a mile from camp at a farm house,” Allen wrote. “Splendid food - eggs, milk and good home cured ham and chicken - two or three times a week. There is a daughter and an “Oakland car.”

Oakland Motor Car Company is largely remembered as one of the founding names for General Motors and was the company that created the car from which Pontiac was born.

It did not seem Allen and Correvon were a couple when the letter was written.

“I can’t say much for these northern girls, however, they have been very nice to me,” Allen wrote.

In his second letter, dated Aug. 7, 1918 Allen wrote, “Your letter came from Oklahoma, Lucille, and you will have to pardon me if I fail to answer it in detail just now. You were general in your expressions concerning me, my dear, but honest Lucille, I am far from discerning them. I am rather thoughtless and selfish. Nevertheless, I appreciate what you have said.”

Allen wrote in the second letter, he was now quarantined and was packed, tagged and “ready for travel.”

“We expected to leave today for where I know not,” Allen wrote. “My baggage is all marked A.E.F.”

Even in quarantine, Allen said his company would take regular hikes, but “only a few miles.” The heat was nearly unbearable for Allen even with his experience in Texas.

“The fact is it would be suicide to attempt much hiking,” Allen wrote. “I never saw such hot, sultry days in all my life. Never got this hot in Texas. Why even as I sit here among the rocks in the shade great drops of perspiration roll down my back and forehead. I am leaning against a tree here in the woods, writing on a Saturday Evening Post on my knee.”

Camp Colt, named in honor of the first revolver’s creator Samuel Colt, was a military installation built upon the famous Civil War battleground at Gettysburg. The July 3, 1863 battle was only 55 years prior to the establishment of Camp Colt, and Civil War veterans still walked its grounds.

The Gettysburg Times reported in March 23, 1918 “With the long buildings brilliantly illuminated the camp presents an attractive sight at night, and during the day the thousand men are kept busy about their quarters, so that the place promises to draw its full share of visitors for weeks to come, increasing in number as the troops are added from time to time.”

Camp Colt was used for tank corps recruits training prior to deployment in World War I.

Commander of the training facility was then Captain Dwight D. Eisenhower. It was his first command. Eisenhower would earn the rank of Major and the Distinguished Service Medal for his efforts at Camp Colt. He and his wife, Mamie, fell in love with the area, and after retiring from the military, made their home near Gettysburg, west of Seminary Ridge.

Training at Camp Colt was rudimentary with machine gun training performed on the back of trucks due to the lack of tanks. When a Renault tank finally arrived, Eisenhower had to teach himself how to use it before he could train his officers.

“The tank corps was new,” Eisenhower said in The Gettysburg Times. “There were no precedents except in basic training, and I was the only officer in the command. Now, I really began to learn about responsibility.”

Along with the two letters, there was a picture of three men in the envelope. The three men were Parker Turner, Allen Turner and Issac Floyd Turner. Parker Turner would help operate Turner’s General Merchandise for many years and was very active in the Franklin Parish community. The store opened in 1920 and would be in operation until it closed in the 1990s.