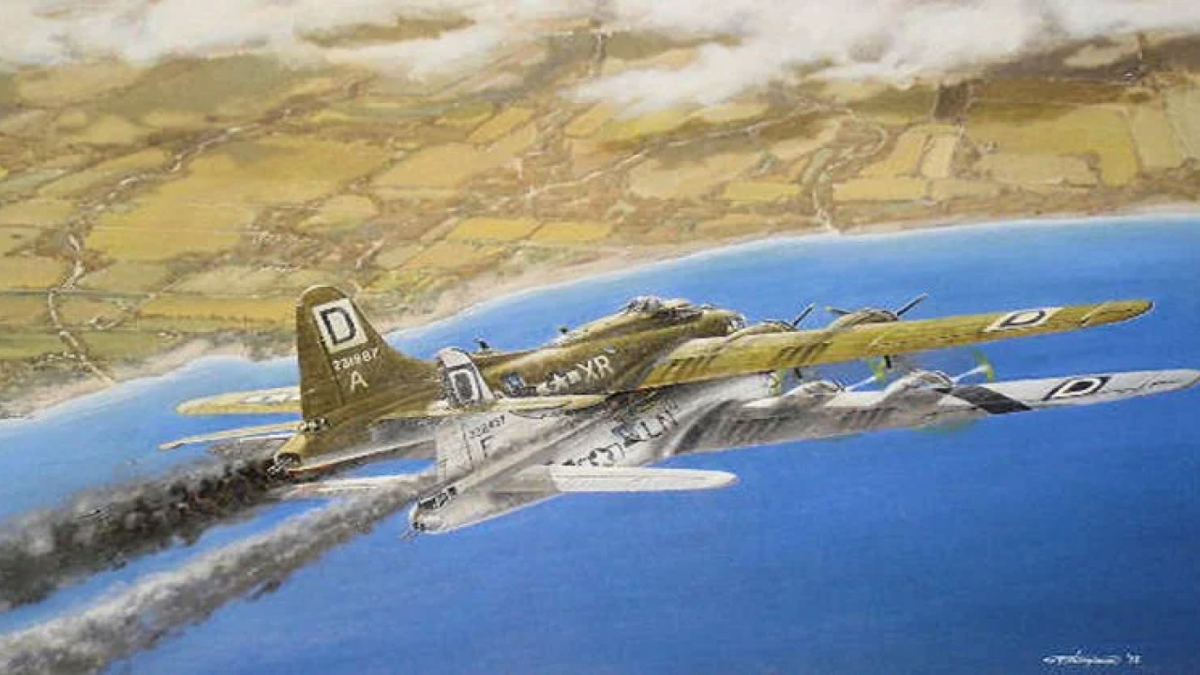 AN ARTIST’S interpretation of two B-17’s locked together mid-air. Orville Earnest Elkin, a former Ward III principal, was a gunner in the top turret of the top plane. 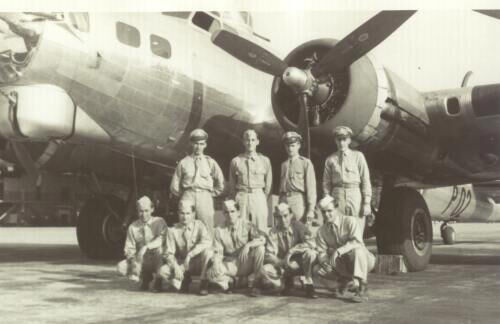 GLEN ROJOHN’s crew is pictured with their beloved “The Little Skipper,” a B-17 bomber. Orville Earnest Elkin was top turret gunner / engineer.

“THE LITTLE SKIPPER” was the B-17 Bomber Orville Earnest Elkin was gunner and engineer on. The B-17’s were named “The Flying Fortresses” and used extensively on daytime bombing runs during World War II.

AN ARTIST’S interpretation of two B-17’s locked together mid-air. Orville Earnest Elkin, a former Ward III principal, was a gunner in the top turret of the top plane.

GLEN ROJOHN’s crew is pictured with their beloved “The Little Skipper,” a B-17 bomber. Orville Earnest Elkin was top turret gunner / engineer.

“THE LITTLE SKIPPER” was the B-17 Bomber Orville Earnest Elkin was gunner and engineer on. The B-17’s were named “The Flying Fortresses” and used extensively on daytime bombing runs during World War II.

AAM tells the story of two nations united through war, loss, love and duty, from World War I to present, according to the museum’s website. AAM is located in Cambridge.

Elkin and his fellow B-17 crew members were inducted into AAM due to their heroism in various bombing missions particularly one over Hamburn.

Elkin was part of the 100th Bomb Group and top turret gunner / engineer aboard the “The Little Skipper” B-17 bomber. He received the rank of Technical Sergeant in the Air Force.

Elkin’s bomber, “The Little Skipper,” was part of the 100th Bomber Group which was nicknamed “The Bloody Hundredth.” It received its nickname because of a reputation for losing a high number of aircrafts and crews.

Their losses were not the highest of any Eighth Air Force Group but on several occasions the Group lost many aircraft during a single mission.

Elkin was top turret gunner on the B-17 Flying Fortress, “The Little Skipper.”

B-17s were a four-engined heavy bomber developed in the 1930s.

The Flying Fortress was primarily employed by the USAAF in daylight strategic bombing campaigns of World War II against German industrial, military and civilian targets.

The B-17 dropped more bombs than any other U.S. aircraft in World War II. Of approximately 1.5 million tons of bombs dropped on Nazi Germany and its occupied territories by U.S. aircraft, over 640,000 tons were dropped from B-17s. In addition to its role as a bomber, the B-17 was also employed as a transport, antisubmarine aircraft, drone controller and search-and-rescue aircraft.

Elkin and his comrades just finished a raid over Hamburg where they braved heavy flak to drop their bombs. Upon turning northwest headed back to England, they were jumped by German fighters at 22,000 feet.

The B-17 bombers continued to fly in formation, so they could use each others guns against the close flying Messerschmitt Me-109s.

The pesky German fighter planes shot down a B-17 in front of Elkin’s bomber. It sickly slid toward the earth as a ball of flames.

Elkin’s bomber hammered forward to fill in the gap when suddenly the B-17 shuddered and felt suddenly very heavy and started losing altitude. Rojohn knew almost immediately that he had collided with another plane.

The two B-17’s were almost perfectly aligned. The tail of the lower plane was slightly to the left of Elkin’s tailpiece.

Three engines on the bottom plane continued to run while all engines on Elkin’s helped keep the strange looking duo in air, but not for long. The bottom bomber’s fourth engine was on fire with flames spreading quickly.

Rojohn, to no avail, tried to break away from the bottom plane. The two were inextricably locked together.

Fearing a fire, Rojohn cut his engines and rang the bailout bell. It was time for Elkin and crew to jump.

The ball turret, hanging from the B-17s belly, was considered to be a death trap and the worst station on the bomber. In the case of the two bombers stuck together, both turrets figured in a swift and terrible drama of life and death.

Staff Sgt. Edward L. Woodall Jr., in the ball turret of the lower bomber had felt the impact of the mid-air collision above him and saw shards of medal drop past him. Because of the impact, electrical and hydraulic power was gone.

He used a hand crank to turn the turret and its guns straight down. Woodall climbed out the back and up into the fuselage. Once inside the plane’s belly, Woodall saw a chilling sight, the ball turret of the other bomber protruding through the top of the fuselage.

In the turret, hopelessly trapped, was Staff Sgt. Joseph Russo.

Crew members frantically cranked Russo’s turret but it was jammed into the fuselage of the lower plane. Perhaps unaware of his voice going over the plane’s intercom, Russo began reciting his Hail Marys.

In the cockpit, Rojohn and co-pilot 2nd Lt. William G. Leek, Jr. used their feet as leverage against the instrument panel, so they could pull back on their controls. They were trying to prevent the B-17 from going into a spinning dive that would prevent the crew from jumping out.

Rojohn motion left and the two managed to wheel the huge, collision-born hybrid plane toward the German coast.

Rojohn ordered Elkin and Tech Sgt. Edward G. Neuhaus to make their way to the fuselage rear and out the waist door which is located behind the left wing. Other members as well bailed out as Rojohn and Leek continued to fly the bomber with its unwanted tag alone.

Two of the six men who parachuted from the plane did not survive. The remaining men were taken prisoner by the Germans.

Fire poured over Rojohn’s left wing as he felt the heat and heard the sound of .50 machine gun ammunition “cooking off.”

Rojohn ordered Leek to bail, but Leek refused because he knew without him the plane would drop in a flaming spiral and the centrifugal force would prevent the pilot from bailing.

Meanwhile, German soldiers and civilians on the ground that afternoon looked up in wonder. Some of them thought they were seeing a new Allied secret weapon -- a strange eight-engined double bomber.

But anti-aircraft gunners on the North Sea coastal island of Wangerooge had seen the collision.

A German battery captain wrote in his logbook at 12:47 p.m.:

"Two fortresses collided in a formation in the NE. The planes flew hooked together and flew 20 miles south. The two planes were unable to fight anymore. The crash could be awaited, so I stopped the firing at these two planes."

In the cockpit, Rojohn and Leak continued to wrestle with controls.

Leek grimly remembered, "The ground came up faster and faster. Praying was allowed. We gave it one last effort and slammed into the ground."

The bottom bomber exploded, vaulting the top plane upward and forward. It slammed back to the ground, sliding along until its left swing slammed through a wooden building.

Rojohn and Leek were still seated in their cockpit with the plane’s nose relatively intact. The rest of the plane was destroyed.

Perhaps suffering from shock, Leek crawled out of a hole and felt for a familiar pack of cigarettes. He placed one in his mouth and was about to light it when he noticed a young German soldier pointing a rifle at him. The soldier yanked the cigarette out of his mouth and pointed down to the gasoline pouring out over the wing from a ruptured fuel tank.

Elkin bailed out in German territory and was soon captured and sent to Stalag Luft IV, located in Gross Tychow, Pomerania in present day Tychowo, Poland. It was December 31, 1944.

Elkin would stay in the camp for six months, 23 days before a U.S. Army infantry group liberated them. James Wells, from Winnsboro, was part of the Army group. The two young men went to school together in Winnsboro.

The camp would hold approximately 10,000 mostly American airmen by January 1945 which was twice as many it could handle, according to a 1944 report by Red Cross.

According to Red Cross reports, men were housed in forty wooden huts, each hut containing 200 men. Dormitories were prepared for 16 men in two tiered beds, but there were not sufficient beds for some rooms contained up to 24 men each. Six hundred men had no mattress, only a few shavings to lie on. Some POWs had to lie on the floor.

Each camp had two open air latrines, and huts had a night latrine with two seats, according to the report. Latrines were not sufficient as they were not emptied often.

Prisoners had no means of washing. There were no shower baths as there was only one coal heated geyser in the camp of 100 liters for 1000 men. Fleas and lice were in abundance.

“Many (prisoners) were kicked, slapped, and hit with rifle butts on their backs and buttocks. One prisoner had from fifty to sixty punctures on his back and buttocks which had been made by German bayonets wielded by guards,” wrote Staff Sgt. William Krebs. “For about six weeks, the only food we had to eat was a little dried sauerkraut and a little bread. When the Red Cross parcels for the prisoners arrived, they were taken by the Germans. The Germans ate the best of the food while we were on extremely short rations and almost allowed to starve.”

Elkin continued to make a difference in peoples’ lives after the war as a teacher, administrator, mentor and coach.

He was a teacher, athletic director, assistant principal and principal at Ward III Junior High School.

Elkin was co-founder of Dixie Senior Baseball and served as its National Commissioner for four years. In 1966, he was named “Outstanding Citizens of the South” for his work with teenage boys.

Elkin was also member of the Masonic Lodge, the Lion’s Club, Civitan Club and the Boy Scouts. He was a member of the First United Methodist Church where he was a Sunday School teacher, a certified church lay speaker and president of the Methodist Men’s Club.

Elkin was a war hero but his service did not end with World War II but continued his entire life.