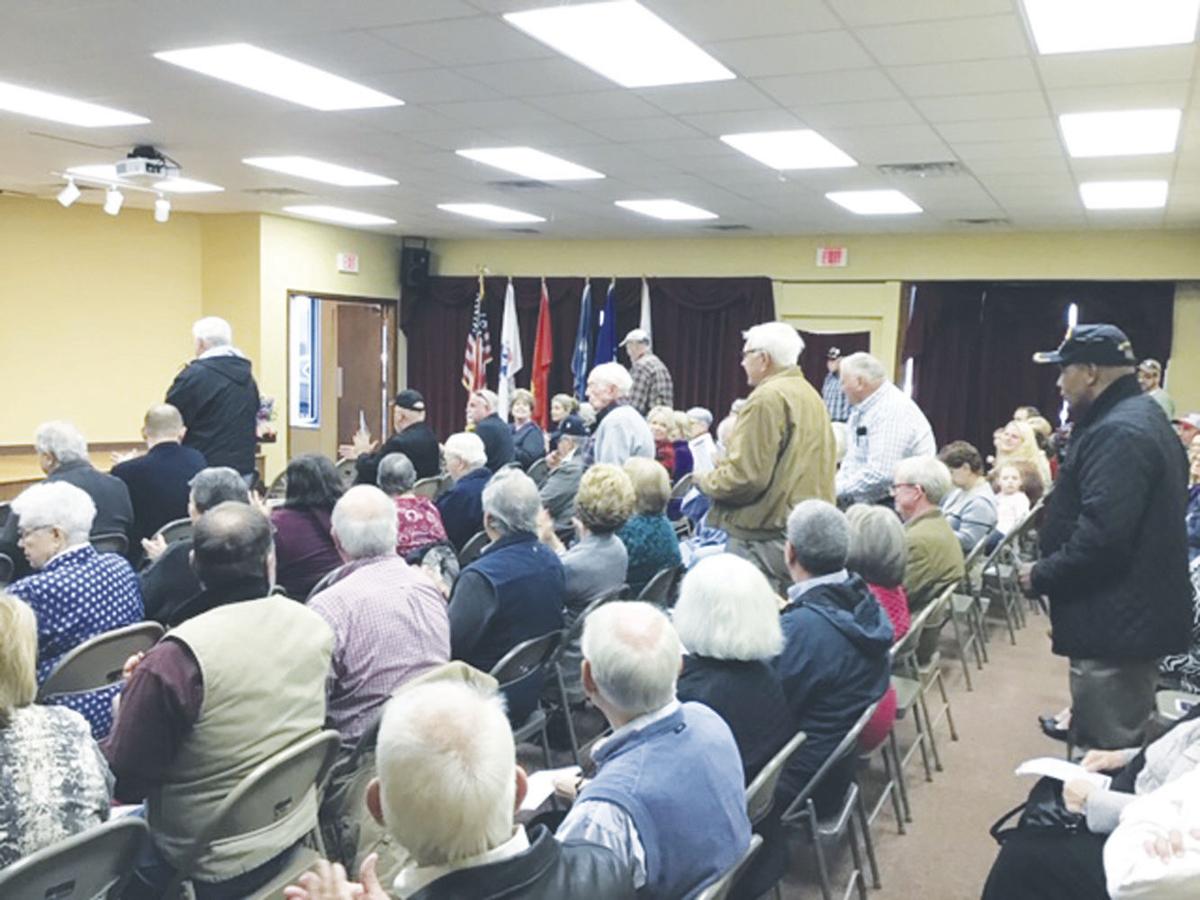 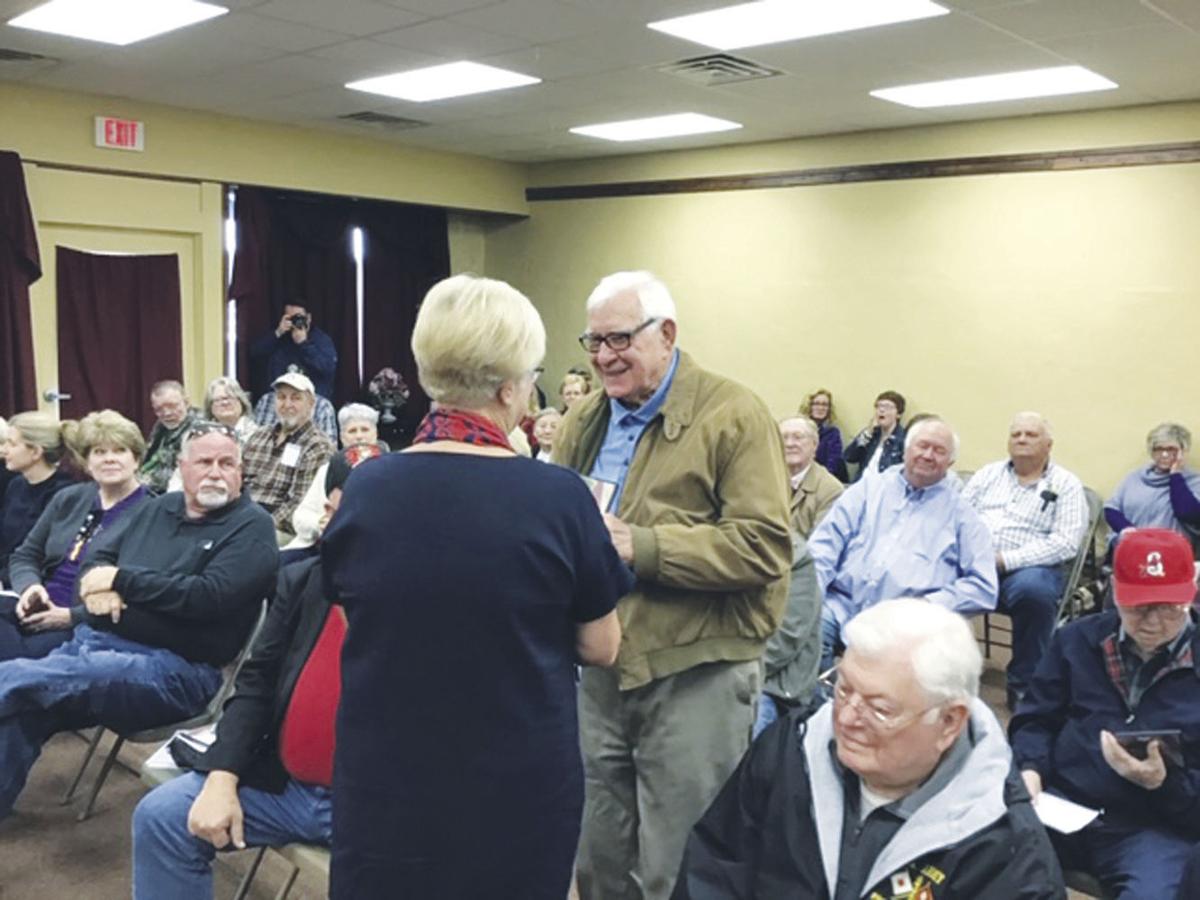 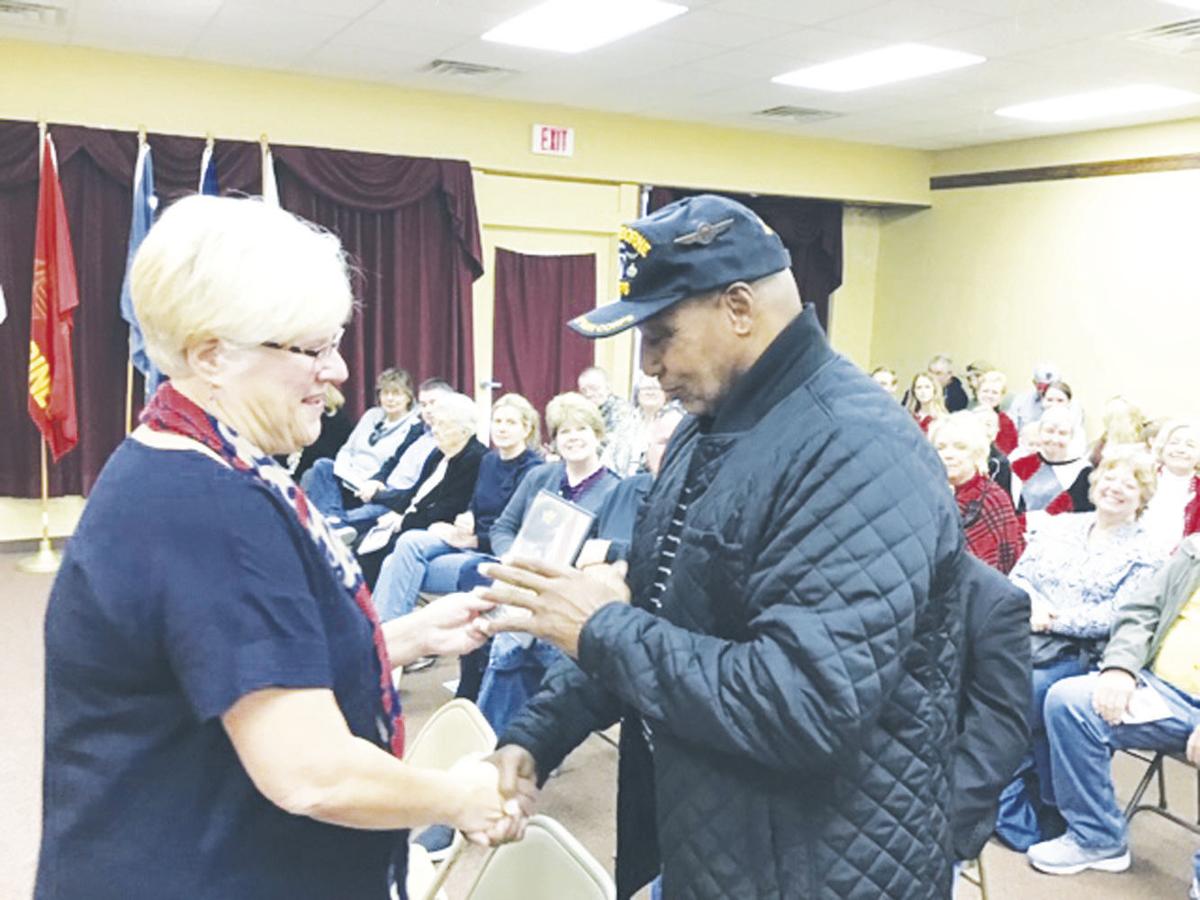 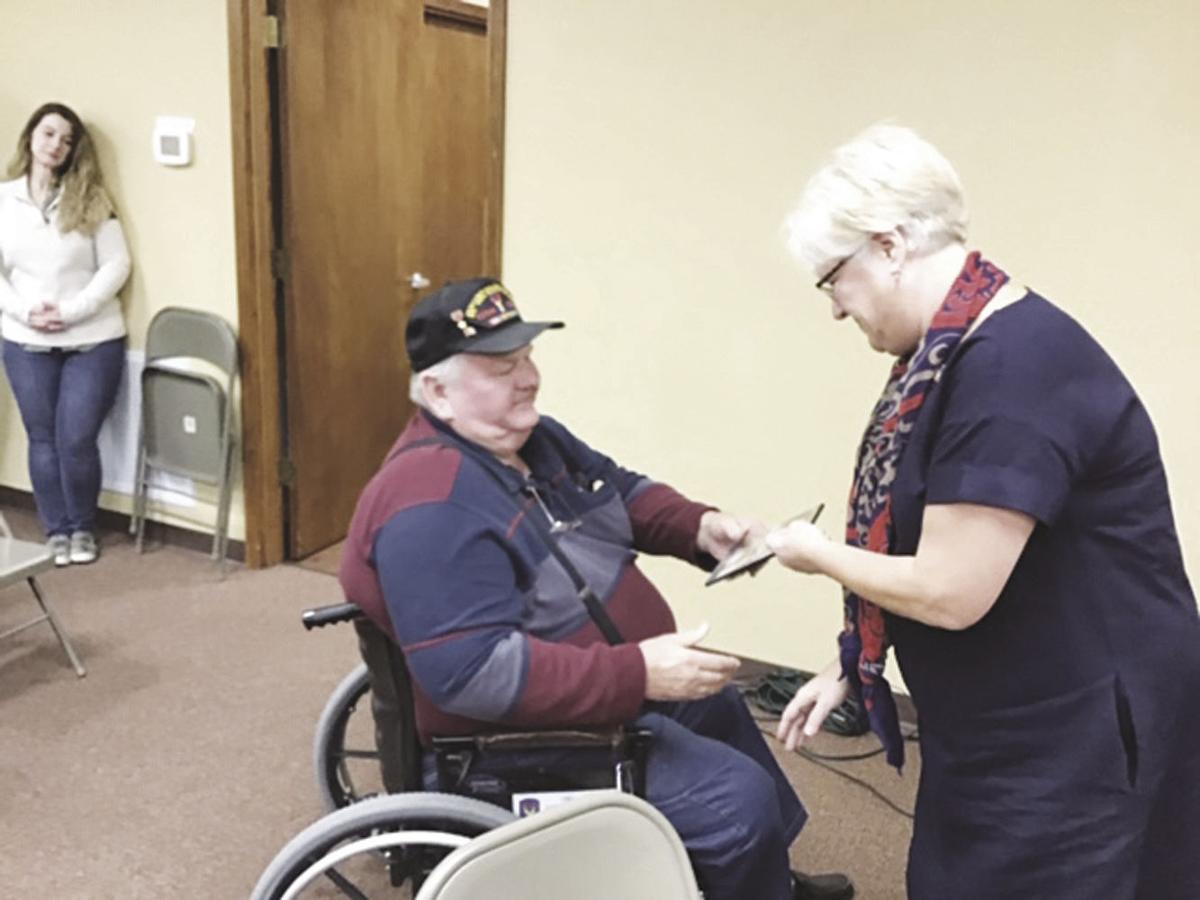 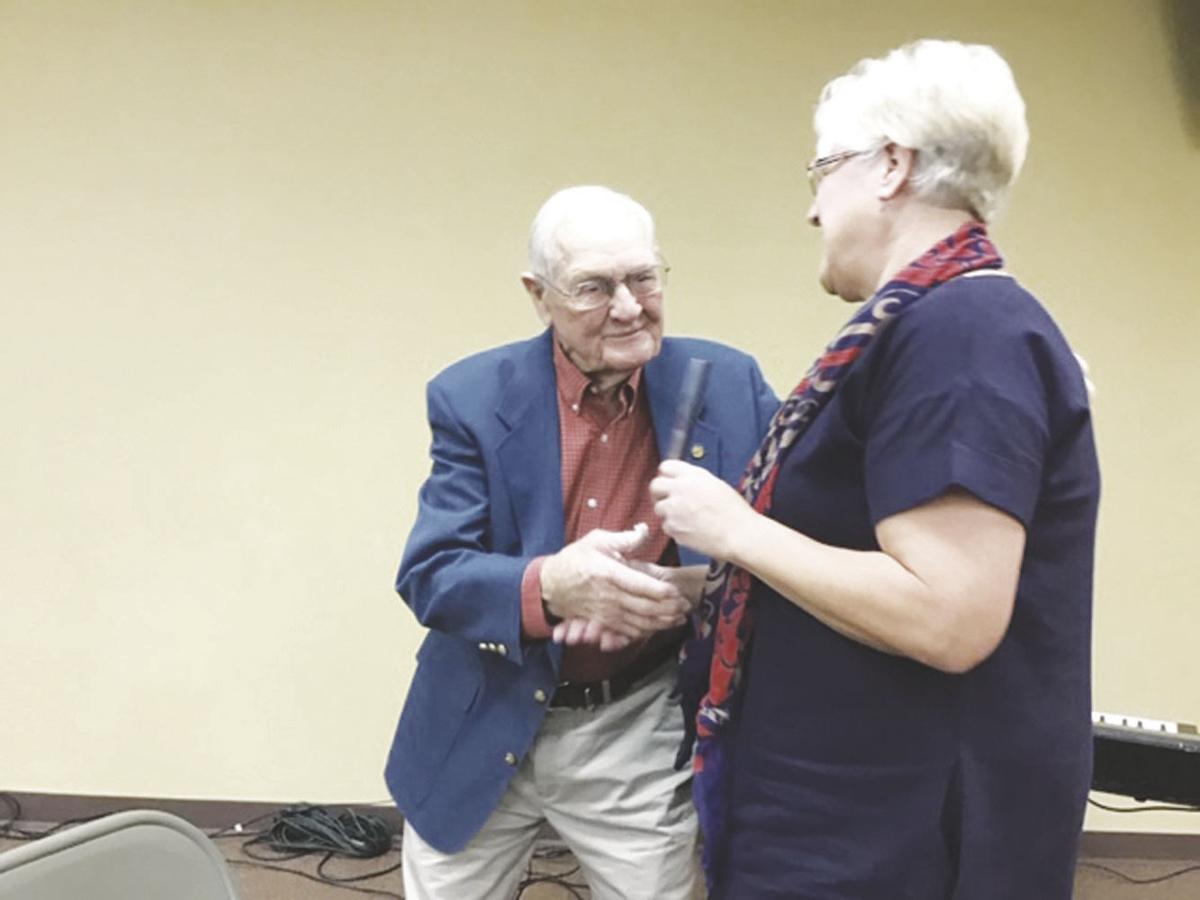 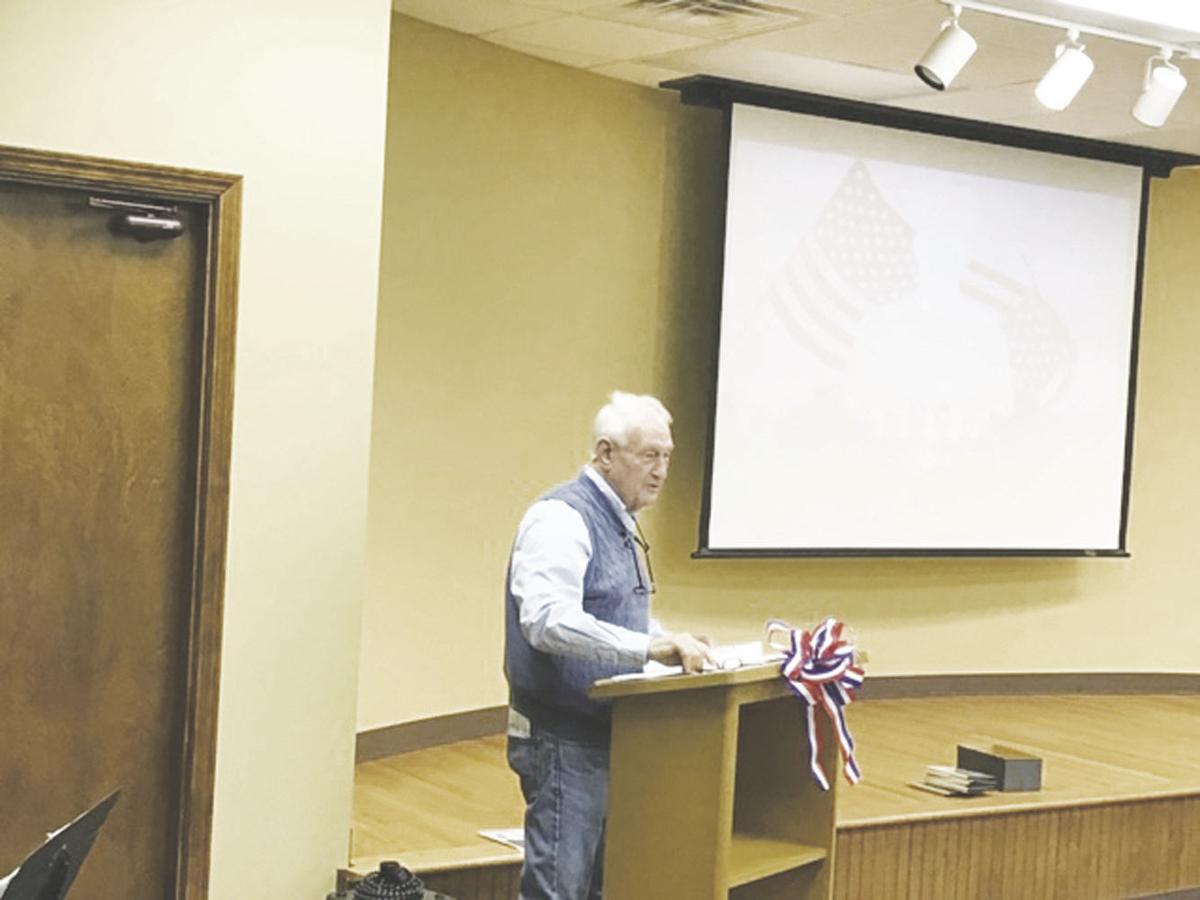 A display at the Franklin Parish Library features photographs of some of Franklin Parish’s veterans along with a bit of information about their service. But the faces and identifications along the Wall of Heroes tell just a little about the sacrifice given by each of those honored.

As the theme of a project initiated thanks to a generous donation from the Como Foundation says, “Every veteran has a story.”

The Franklin Parish Library Veterans Oral History Project seeks to capture those stories and preserve them for future generations.

The project kicked off early last year. In honor of those who have participated thus far the library hosted a special presentation on Nov. 16 that included a video premiere “Stories of Service” which allowed the gathering of about 80 community supporters and veterans to see for the first time portions of the recorded interviews of veterans who shared their stories.

Veterans present for the ceremony were recognized as the song for their branch of service was played. In appreciation for their service and for their willingness to share their stories, veterans or family members of those involved were presented personal copies of the interviews.

Rev. George Bates, who was guest speaker for the program, offered words of appreciation for their service.

The oral history project has special meaning for project coordinator and Army veteran retired Sgt. First Class Janis Smith. Smith made the presentations of the DVDs to the veterans present.

Expressing appreciation to those gathered for the recent ceremony, Smith said, “Thank you for being here this morning and helping us to honor and recognize our veterans who willingly gave of their time to share their stories for the Franklin Parish Veterans Oral History Project. It has been an honor to hear these stories of valor, duty, courage and selfless service.”

Smith noted that the inspiration for the project began with the success of the permanent Wall of Heroes exhibit at the library. There are currently over 350 Franklin Parish Veterans honored on the wall located in the library’s main branch.

The oral history project became a realty thanks to the generosity of the late Luella Snyder, who had served as president of the library’s board of directors for 43 years.

“Those who knew Miss Luella knew she was a big supporter of the library and our genealogy services. She was very patriotic and had a soft spot for service members. She always voiced her desire to have an oral history project and in 2017 her vision came to fruition with her foresight and the generosity of the Como Foundation.

Since the project started, 34 veterans from World War II, the Korean War, Vietnam, Desert Storm, Operations Enduring Freedom and Iraqi Freedom, as well as those who served stateside, have been interviewed.

Smith noted the project did not end with the recent ceremonies.

“This will be an ongoing project as long as veterans want to share their stories and be interviewed,” Smith said.

Copies of the videos are expected to be available for checkout by Monday, Dec. 2. The videos can also be viewed in the future in the library’s genealogy department.

Smith said she is grateful that the recent premiere spurred interest in the project.

“Many said they wanted to watch and listen to the rest (of the stories),” She said.

Comments posted on social media and shared by Smith reflected the response, she said.

From Mitzi Riser: “I cried listening to Mackie Cobb and then the next veteran to come up was a very dear friend, Bobby LaBorde. I cried all over again. Great job Janis and thank you to these few veterans who represent so many more.”

From Lisa Givens Rolfe: “I cried pretty much the whole way through. How humble these men are with a quiet sense of duty and patriotism.”

From Peggy Nations: “Janis, this program was so meaningful and such a nice tribute to all our veterans. Thank you for caring, sharing, working so hard and immortalizing the legacy of these veterans.”

Those veterans participated in the initial phase of the Veterans Oral History Project are:

The video from the Nov. 16 presentation can be viewed on the Franklin Parish Library’s Facebook page.

Robert Finley, Winnsboro native and America’s Got Talent semi-finalist, will be performing i… Read more