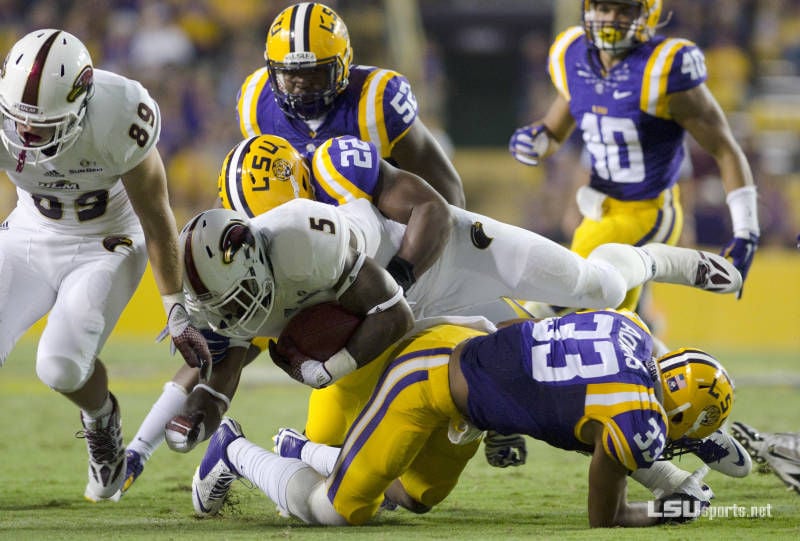 ULM running back Centarius Donald (#5) is stuffed by the LSU defense after a short gain in the ULM at LSU game at LSU's Tiger Stadium on Saturday, September 13.  LSU won the game 31-0 over the visiting Warhawks. 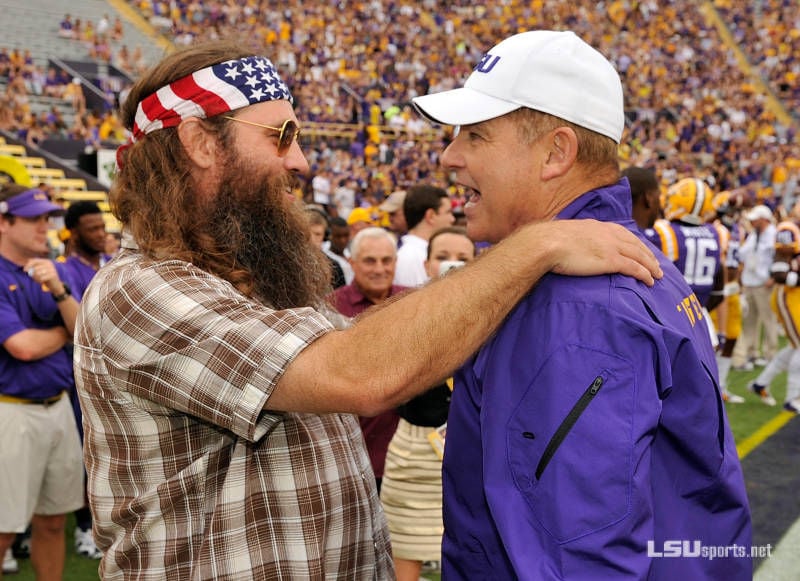 ULM alumnus and Duck Dynasty star Willie Robinson and LSU coach Les Miles visit prior to kickoff of the ULM at LSU game. 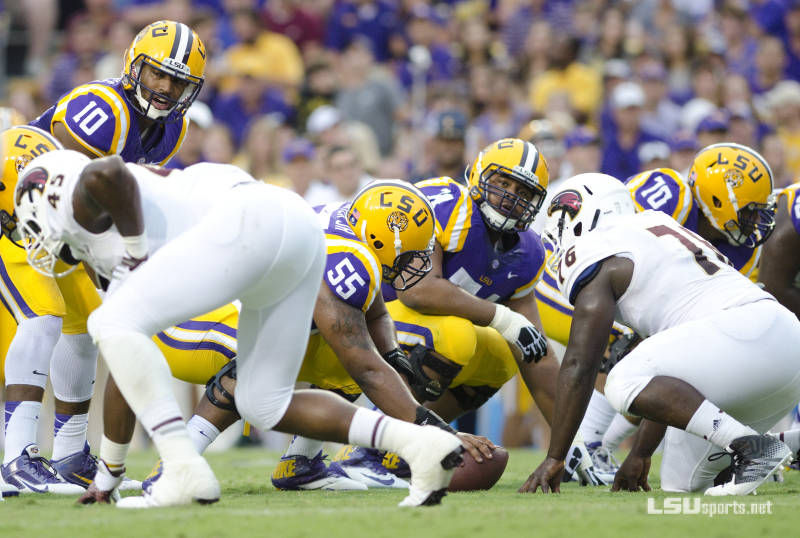 ULM running back Centarius Donald (#5) is stuffed by the LSU defense after a short gain in the ULM at LSU game at LSU's Tiger Stadium on Saturday, September 13.  LSU won the game 31-0 over the visiting Warhawks.

ULM alumnus and Duck Dynasty star Willie Robinson and LSU coach Les Miles visit prior to kickoff of the ULM at LSU game.

LSU's defense stole the show on Saturday night, posting a 31-0 victory over Louisiana-Monroe that gave the Tigers shutouts in consecutive games in Tiger Stadium for the first time in 73 years.

In the process, LSU (3-0) extended its streak of scoreless possessions by its opponents to 31, allowing the ULM (2-1) only 93 yards of total offense and six first downs.

The victory was LSU's 400th all-time in Tiger Stadium dating back to its first in 1925. The last time the Tigers had consecutive home games that ended in shutouts was Oct. 11 and 18, 1941, against Mississippi State (0-0 tie) and Rice (27-0). It was also the first time since 1985 that LSU had back-to-back shutouts irrespective of venue.

Freshman running back Leonard Fournette led the way with 10 carries for 54 yards including a 24-yard touchdown, while senior Kenny Hilliard ran 12 times for 50 yards and scored from 4 yards in the fourth quarter. Terrence Magee added 43 net yards on 12 attempts, and freshman Darrel Williams scored twice and finished with 37 yards.

LSU scored touchdowns on three-straight drives over a 10-minute span of the second half to extend a 10-0 halftime lead to the final margin.

It was the LSU defense who dominated in every phase and kept the Warhawks off the field for most of the game. LSU forced 10 punts and three-and-outs on 7 of 12 drives. Linebacker Duke Riley had eight tackles to lead the Tigers, while Rickey Jefferson added five.

Since trailing Wisconsin 24-7 early in the third quarter of the season opener, LSU has outscored its opponents 108-0.

ULM quarterback Pete Thomas was 16-of-30 passing for 77 yards including a 12-yard pass to Kenzee Jackson that was the Warhawks longest play from scrimmage. He was sacked only once but hurried by the Tigers defense on four more attempts.

Running back Centarius Donald led the Warhawks in rushing with 24 yards on 10 attempts. ULM finished with 16 net yards on 18 carries.

Punter Justin Manton helped ULM maintain field position with 10 punts for a 40.2 average - including an 8-yarder that led to an LSU touchdown in the third quarter.

ULM won the coin toss and deferred its decision until the second half, while LSU received the opening kickoff with its back to the south endzone and facing a hefty north breeze.

A 40-yard kickoff return from the goal line by Fournette gave the Tigers excellent field position, however, Jennings' third-and-10 scramble came up a yard short of the marker.

The Tigers' was the first of four-straight combined to open the game, as the LSU defense refused to budge in the opening salvo.

On LSU's third drive of the game, a 16-yard punt return by Tre'Davious White put the Tigers at midfield. After Hilliard gained a first down with a 3-yard run to the ULM 39, Jennings and Dural connected for a 14-yard gain to the 23. Though the Tigers went backward with a pair of penalties, Jennings got it all back on third-and-23 with a 23-yard pass to John Diarse that was caught at the 12.

A third-and-5 pass to Trey Quinn came up short of the first down, and Colby Delahoussaye came on to make a 21-yard field goal. LSU led 3-0 with 3:20 left in the opening quarter.

Starting from its 15, LSU put together a 10-play, 85-yard drive to extend its advantage. A 20-yard catch and run by Fournette allowed the Tigers to cross midfield to the 44. On third-and-1, Darrel Williams lined up at the fullback position and took a handoff from Jennings to the right before bouncing off a tackle to the left and running around the end for a 22-yard touchdown.

After two more punts, ULM got an LSU facemask penalty on a punt return and started from its 43. The Warhawks earned their first two first downs of the game and advanced into LSU territory. But, LSU stepped up its defensive pressure and forced another punt.

Jennings' 22-yard scramble when he looked to be sacked twice helped LSU get out of its red zone to its 44. The Tigers managed only one more yard and Jamie Keehn entered for a 50-yard punt to the ULM 5.

The Warhawks managed another first down on the ensuing drive before punting for the sixth time in the half.

LSU took over at its 39 and crossed midfield with a 16-yard catch by Diarse. On second-and-7 from the ULM 37, Jennings' pass in the direction of Quinn was intercepted by ULM's Mitch Lane. Lane was initially called for pass interference but the flag was waived off, the official citing feet tangled together as the reason for the contact.

Following Jennings' first interception of the season, ULM ran out the clock and LSU took a 10-0 lead into the lockerroom.

LSU took control of the game with touchdowns on three-straight drives in the second half.

Williams capped an eight-play, 54-yard drive with a 1-yard touchdown dive as a fullback. A third-and-5 catch and run by Quinn to the ULM 8 kept the drive alive and setup the score.

An 8-yard punt by Manton didn't reach the first-down marker and giving the Tigers a short field at the ULM 35. The last of five-straight runs was a 24-yard burst around the left side by Fournette, who was sprung loose by Evan Washington and Connor Neighbors' crushing blocks. LSU pushed its advantage to 24-0 with 3:26 left in the third quarter.

The Tigers slammed the door with a 10-play, 58-yard drive that ended with a 4-yard touchdown run by Hilliard.

Announced attendance was a record 101,194 in the newly expanded Tiger Stadium.