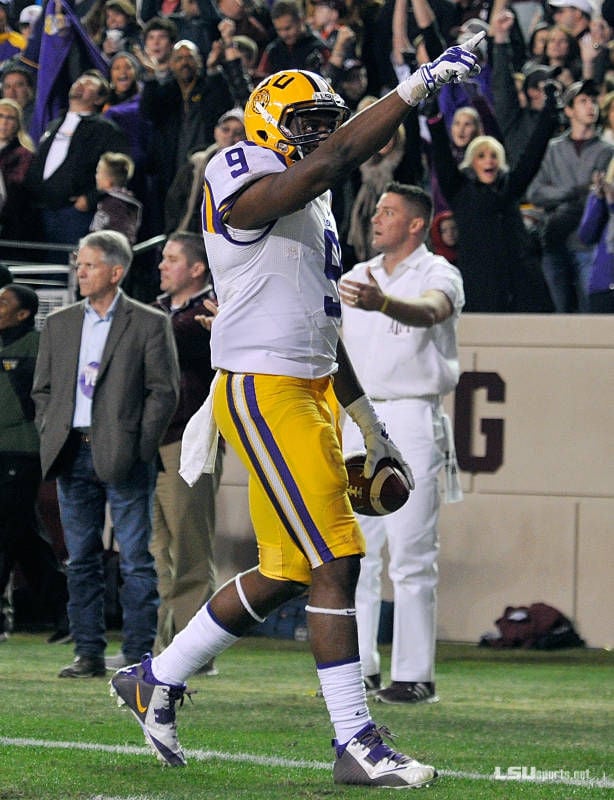 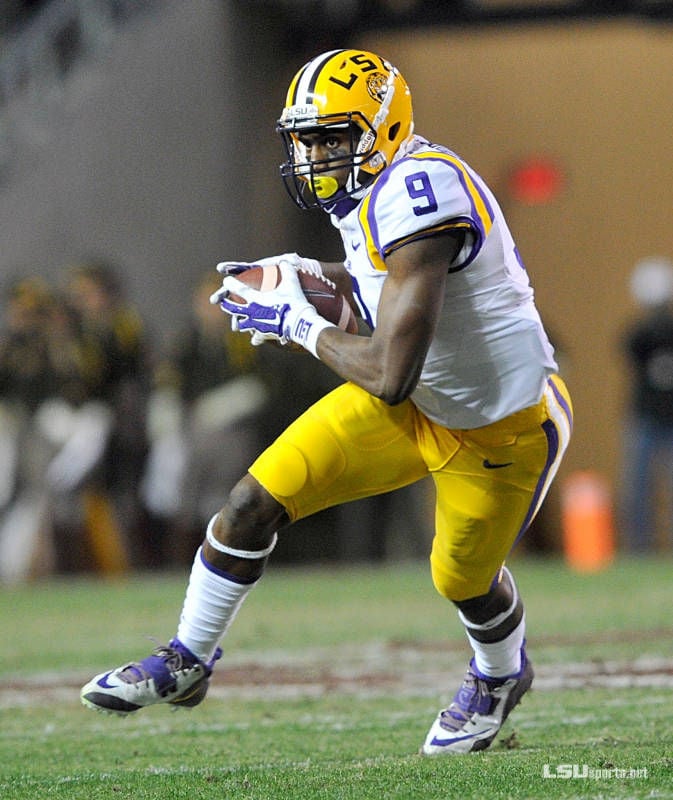 COLLEGE STATION, Texas -- The LSU football team had its most productive rushing game against an SEC opponent in 17 seasons, as the Tigers ran for 384 yards to defeat Texas A&M, 23-17, at Kyle Field on Thanksgiving Day.

LSU (8-4, 4-4 SEC), which snapped a two-game losing streak in the league's brutal Western Division, was led by 100-yard rushing efforts by sophomore quarterback Anthony Jennings and freshman running back Leonard Fournette, along with a stout effort by its ever-improving defense.

Texas A&M (7-5, 3-5 SEC) lost to the Tigers for the fourth-straight time including all three games since joining the conference plus the 2011 Cotton Bowl. The Aggies were held to only 228 yards of total offense.

Fournette had a career-best 146 rushing yards on 19 carries including a bruising 22-yard touchdown run that helped LSU tie the game and start a run of 17 points in the final 4:33 of the second quarter.

Jennings became the ninth quarterback in LSU history to run for more than 100 yards, using read options to amass 119 rushing yards - the fourth-best single-game rushing yards by an LSU quarterback. He was 12-of-21 passing for 107 yards with a 10-yard touchdown pass to wide receiver John Diarse just before halftime.

Malachi Dupre was LSU's leading receiver with a 41-yard catch, while Dural added 29 yards on three carries. Seven different players caught passes from Jennings, who kept the Tigers on the field for 41:13 while converting 6-of-15 third downs and both fourth-down attempts.

LSU's time of possession was its highest since Oct. 18, 2003, at South Carolina.

The Aggies were led by quarterback Kyle Allen, who was 17-of-27 passing for 144 yards with a touchdown and an interception that sealed the victory for LSU with 81 seconds remaining.

Trey Williams had 62 of TAMU's 84 net rushing yards including a 41-yard touchdown that gave the Aggies an early 7-0 lead. Speedy Noil had four catches for 46 yards with a 27-yard touchdown in the fourth quarter.

LSU awaits its postseason bowl destination, which it expects to learn on Dec. 7.

Texas A&M won the coin toss and elected to receive the opening kickoff. The Aggies took Domingue's kick for a touchback. A 9-yard pass from Allen to Brandon Williams and a 3-yard run by Williams gave the Aggies a first down to the LSU 37, however, a stop by LSU linebacker Kendell Beckwith for a 4-yard loss on second down put Texas A&M behind in down and distance, leading to a punt.

LSU gained both its first downs on runs of 12 and 2 yards by Jennings on its first series, but the quarterback was intercepted by junior cornerback De'Vante Harris on a first-down pass in Dural's direction.

After a 5-yard return, Texas A&M took over at the LSU 49 and took advantage of the mistake with a three-point drive that ended with a 41-yard touchdown run up the middle by Trey Williams.

The Tigers rallied offensively, gaining a first down on a 5-yard pass from Jennings to tight end Travis Dickson at the LSU 37. An end-around by Dural went for 14 yards and moved the chains once again across midfield. Passes for 5 yards to Dural on another end-around and 7 yards to Diarse kept LSU's momentum, and a 26-yard run around the right end by Jennings put the Tigers inside the Aggies 11. Texas A&M stiffened defensively and LSU was forced to attempt a 22-yard field goal that Delahoussaye pushed to the right.

The Tigers defense stepped up the challenge, putting the Aggies offense off the field in three plays and a punt.

For the third time in as many drives, LSU's offense moved into Texas A&M territory but came away empty. Fournette gained a rushing first down following a 9-yard catch-and-run by fullback Connor Neighbors on the first play of the drive. LSU overcame a holding penalty with a 9-yard run by Fournette, a 6-yard slip screen to Magee and a 12-yard by Diarse on a third-and-5 "do over." LSU was allowed to replay third down when an inadvertant whistle stopped Pocic from advancing a Jennings fumble following a sack.

Three-straight runs by Fournette allowed LSU back on the Aggies' side of the field at the 38, but after Magee picked up a first down with a run on fourth-and-2, a dead-ball personal foul on La'el Collins moved the ball from the 29 back to the 44. Incomplete passes on second and third down led to a Jamie Keehn punt that was downed at the Aggies 2. LSU held the ball for more than eight minutes prior to the punt.

The Tigers defense continued its terrific play in the opening half, as freshman safety Jamal Adams held Aggies wide receiver Ricky Seals-Jones to a 1-yard gain on third-and-2 from the TAMU 10.

A punt of 39 yards was downed at midfield and LSU started its string of 17 points in the final 4:33 of the half.

A 19-yard end-around by Dural went to the 27 and Fournette added five more yards to the 22. On second-and-5, Fournette took another carry to the left and found a big hole. With only a safety between him and the endzone, Fournette barrelled over Howard Matthews at the 11-yard line and finished off the 22-yard scoring run.

LSU tied the game at 7-7 with Domingue's first career PAT at the 4:33 mark of the second quarter.

A third-straight three-and-out by the Aggies and a 43-yard punt brought LSU's offense to its 27-yard line with 3:21 remaining in the half. Runs of 36 and 10 yards by Jennings moved the Tigers into the Aggies red zone at the 16. Three plays later, Jennings scrambled and found Diarse wide open in the left corner of the endzone for a 10-yard touchdown.

But, the Tigers weren't done scoring before the break, as Devin Voohries ripped the ball from Noil's hands on the kickoff return and Duke Riley recovered the loose ball at the TAMU 19.

Two plays later, Domingue was called upon for his first career field goal, a 31-yard attempt that was true. With 8 seconds left in the half, LSU led 17-7.

Attendance was announced as 105,829, the third largest to watch an LSU football game.

In the third quarter, LSU's running attack began to wear on the Aggies. The Tigers put togther a 13-play, 70-yard drive that took 7:35 off the clock to start the thrid quarter. However, on third-and-4 from the Aggies 12, LSU couldn't manage a first down and again settled for a 27-yard field goal by Domingue. The lead increased to 20-7 with 7:25 left in the quarter.

After the teams traded punts, Texas A&M put together a 12-play, 52-yard drive that spanned the quarters. Aided by an LSU pass interfence panalty in the endzone on third-and-23, the Aggies moved into the redzone but also came away with a Josh Lambo field goal of 34 yards.

With 13:38 remaining, the Tigers went on the offensive march again, with Jennings and Fournette slashing for runs of 9 and 13 yards to start the drive. A 41-yard catch by Dupre along the right sideline put the Tigers at the 12, but false start and holding penalties doomed the effort. On fourth-and-20 from the 22, Domingue missed a 39-yard field goal and LSU's lead stayed at 20-10 with 9:22 left.

Texas A&M responded with its best drive of the game, gaining 77 yards in eight plays to get with three, 20-17, on a 27-yard touchdown catch by a well-defended Noil.

With 6:34 to play, Ed Paris recovered a fumble by Fournette on the kickoff return that may have shifted momentum to the Aggies. Instead, Dural was credited for 10 yards on an end around that came back due to holding. Two plays later, Fournette peeled off a career-best 46-yard run along the left sideline to the Texas A&M 32. Though Jennings took a sack on third-and-7, Delahoussaye returned to kick a 43-yard field goal and give LSU a 23-17 advantage with 2:07 to play.

On the Aggies' final drive, two 12-yard passes by Allen moved the ball near midfield. On third-and-10 from his 49, Allen thought he had pulled LSU defensive lineman Sione Teuhema into the neutral zone and had a free play. He lofted a pass into double coverage and LSU cornerback Jalen Collins came down with an interception.

The officials ruled did not throw a flag, leaving LSU with a few plays in the victory formation away from an eighth win for the 15th-straight season.