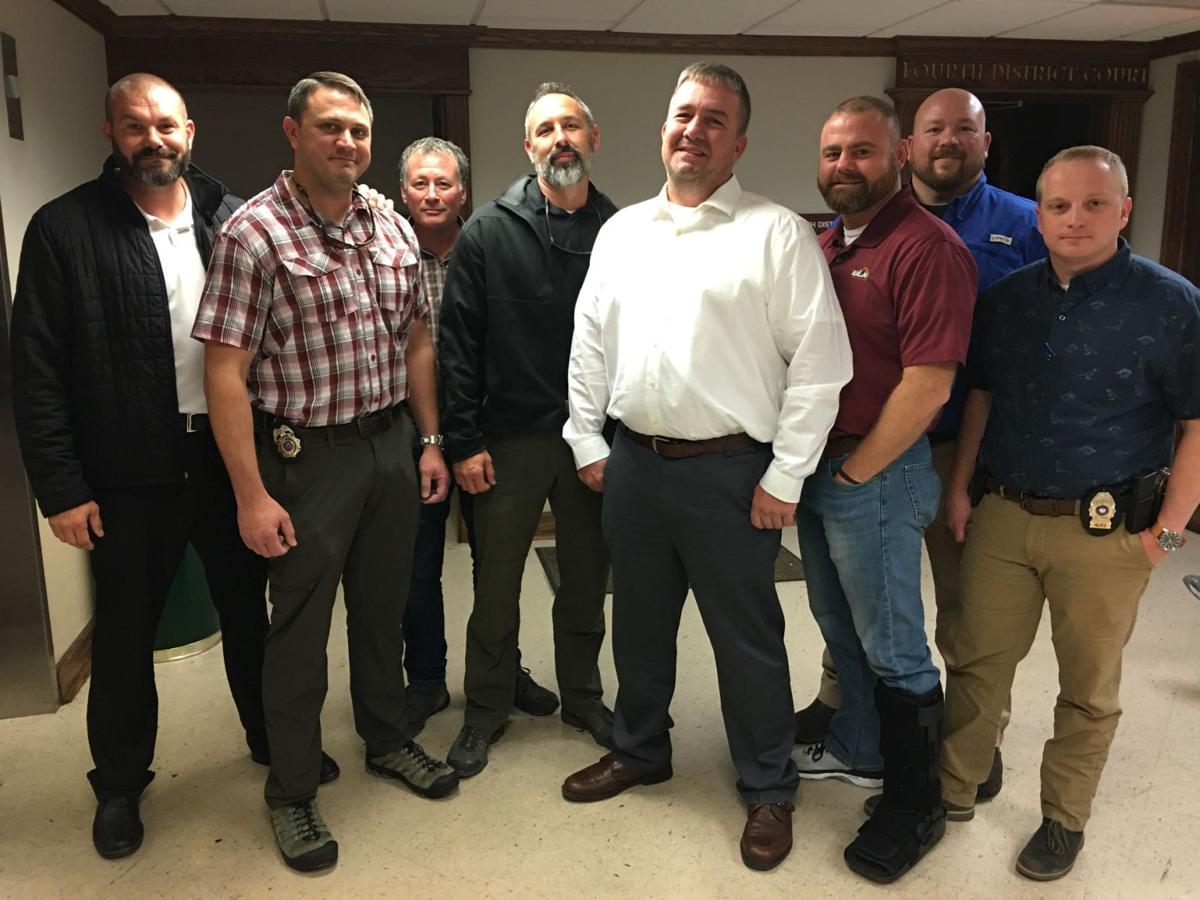 WEST MONROE police officer Dennis Wall, at center wearing white shirt, was acquitted last week after a two-day trial in which Fourth Judicial District Attorney Steve Tew prosecuted Wall for illegally sharing a sex video with a local teacher. The jury found Wall not guilty after hearing testimony from the victim, investigator, and others, including West Monroe High School teacher Michelle Jones, who widely shared the sex video but escaped prosecution through a special agreement with Tew's office to guarantee her immunity. Seen with Wall above are several of his colleagues from the department who attended the trial in support of Wall. Wall is expected to return to work. 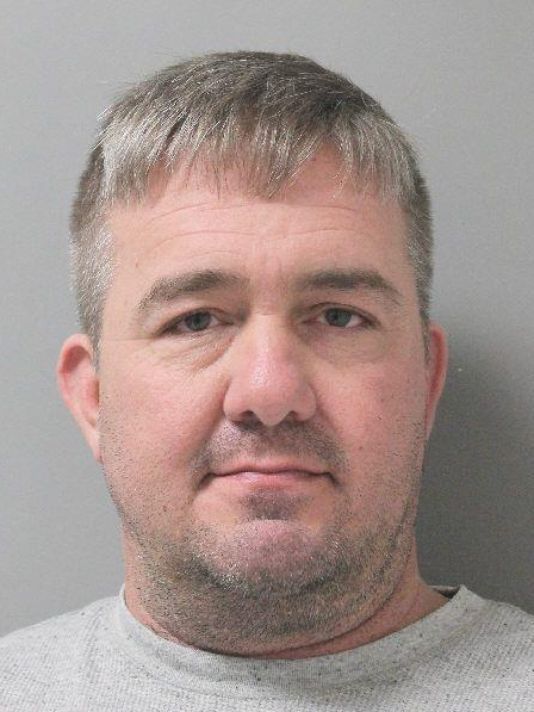 WEST MONROE police officer Dennis Wall, at center wearing white shirt, was acquitted last week after a two-day trial in which Fourth Judicial District Attorney Steve Tew prosecuted Wall for illegally sharing a sex video with a local teacher. The jury found Wall not guilty after hearing testimony from the victim, investigator, and others, including West Monroe High School teacher Michelle Jones, who widely shared the sex video but escaped prosecution through a special agreement with Tew's office to guarantee her immunity. Seen with Wall above are several of his colleagues from the department who attended the trial in support of Wall. Wall is expected to return to work.

The video depicted sexual intercourse between Wall and his then-girlfriend in early 2017. In December 2017, Wall sent the sex video to Michelle Jones, a classroom teacher at West Monroe High School. At that time, Jones’ ex-husband, John “Danny” Jones, was dating Wall’s ex-girlfriend, the woman in the video. Michelle Jones sent the sex video and/or images from the video to several people, including a high school student and employees at Danny Jones’ now-defunct company, United Home Care Inc.

Wall was placed on administrative leave from work with the West Monroe Police Department following his arrest in early 2018 for non-consensual disclosure of a private image. Fourth Judicial District Attorney Steve Tew’s office later charged Wall with obstruction of justice, claiming the officer tried to get rid of the cell phone containing the sex video.

The jury delivered its verdict of not guilty on both charges the afternoon of Nov. 19, after little more than an hour of deliberation.

Fourth Judicial District Court Judge Larry Jefferson charged the jury with determining whether the district attorney had proved beyond a reasonable doubt that Wall had committed non-consensual disclosure of a private image and obstruction of justice.

When the clerk read aloud the jury’s verdict, Wall thanked his attorney, Devin Jones, of Monroe, and greeted the several West Monroe police officers attending the trial to support him.

“My client is very happy,” Devin Jones said. “We’re proud of the hard work by the jury. It took two years, but my client’s not guilty.”

There were tears in Wall’s eyes as his colleagues shook his hand and patted him on the back.

Outside the courtroom, the other officers hemmed in Wall and called West Monroe Police Chief Jeff Terrell, who could be heard on speaker saying, “I’m seeing about when we can get you back to work.”

Wall’s acquittal marked the second time since 2016 that the district attorney’s office had prosecuted a West Monroe police officer but failed to persuade a jury to convict.

When asked for a comment, Aycock said, “The jury rendered its verdict. That’s all you can say.”

Southern declined to add anything to Aycock’s remarks.

Tew did not prosecute Michelle Jones but enrolled her in a diversion agreement guaranteeing her immunity from any criminal charge after paying a $650 fine. As stated during testimony at trial, Tew personally guaranteed Michelle Jones immunity through the agreement before she was even questioned by sheriff’s investigator James Humphrey.

In his closing arguments, Devin Jones argued that the district attorney’s star witness, Michelle Jones, was the embodiment of reasonable doubt because of her unreliable testimony.

“Michelle Jones’ testimony, as incredulous as it was, is reasonable doubt,” Devin Jones said.

Even the investigator, Humphrey, acknowledged in testimony that Michelle Jones changed her account, especially the one concerning who widely distributed the videos and why, Devin Jones said.

“Every time she tells that story, she tells it differently. She adds to it,” Devin Jones said. “She remember more details than she ever knew before.”

“She’s the bully in the courtyard,” Devin Jones said. “She’s trying to turn this jury into her pawn.”

During the district attorney’s closing arguments, Southern defended Tew’s diversion agreement with Michelle Jones though Southern also clarified his own personal view of the witness.

“The DA made a deal with Michelle Jones to cooperate with an investigation of a police officer who committed a felony,” Southern said. “I’d make that deal again.”

“Do I like Michelle Jones? Not particularly,” he added.

Concerning the non-consensual disclosure of a private image charge, Southern argued there was no other reason for Wall to send the sex video without the intent to harass or cause emotional distress, though he did not refer to any evidence supporting that conclusion.

“Common sense would tell you these videos were to remain private,” Southern said. “Twice she was told the videos were deleted.”

“Why else would the defendant release these videos other than to harass and cause emotional distress?” he added.

Regarding the obstruction of justice charge, the district attorney’s office argued Wall had tried to get rid of the evidence or hinder the investigation by buying a new cell phone. In contrast to the prosecution’s arguments, it was revealed in testimony at trial that Wall had upgraded his iPhone 7 to an iPhone X. Wall still possessed the iPhone 7 used to send the videos, but Humphrey, the investigator, had never asked Wall if he could examine it.

Referring to Southern’s arguments, Devin Jones argued the district attorney should have proven Wall’s guilt beyond a reasonable doubt instead of simply telling the jury there was no other reason for Wall to send the sex video except to commit a crime.

Concerning the obstruction of justice charge, Devin Jones claimed the district attorney’s office filed the additional charge against Wall as part of an effort to cover up its first mistake: guaranteeing Michelle Jones immunity.

“This was an extra charge they added, piled on,” Devin Jones said. “That’s why they added that charge of obstruction of justice that Mr. Humphrey wouldn’t arrest him for.”

“Six-hundred-and-fifty dollars and nothing for this girl who created this montage of heck,” he added. “They had to. Because they gave a deal to the wrong person. Somebody had to take that charge.”

Before trial, the woman depicted in the sex video stated in an affidavit that she objected to Tew’s prosecution of Wall, especially since the district attorney would not prosecute Michelle Jones for the same offense. Michelle Jones, not Wall, was the party at fault, according to the victim.

“No voice,” said Devin Jones, referring to the victim. “And when she did exercise her voice, she was told, ‘No.’”

Devin Jones closed his arguments by asking the jury to give the victim the voice that Tew and others had denied her.