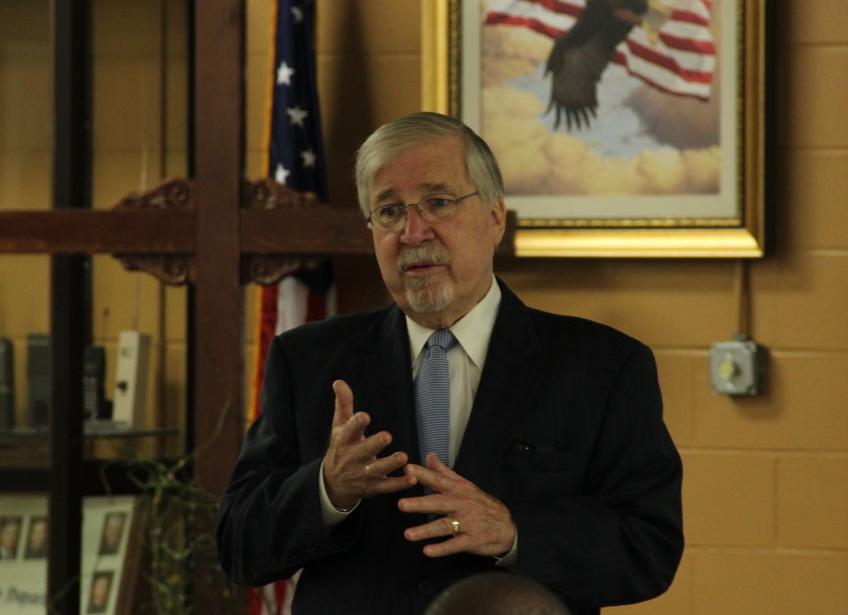 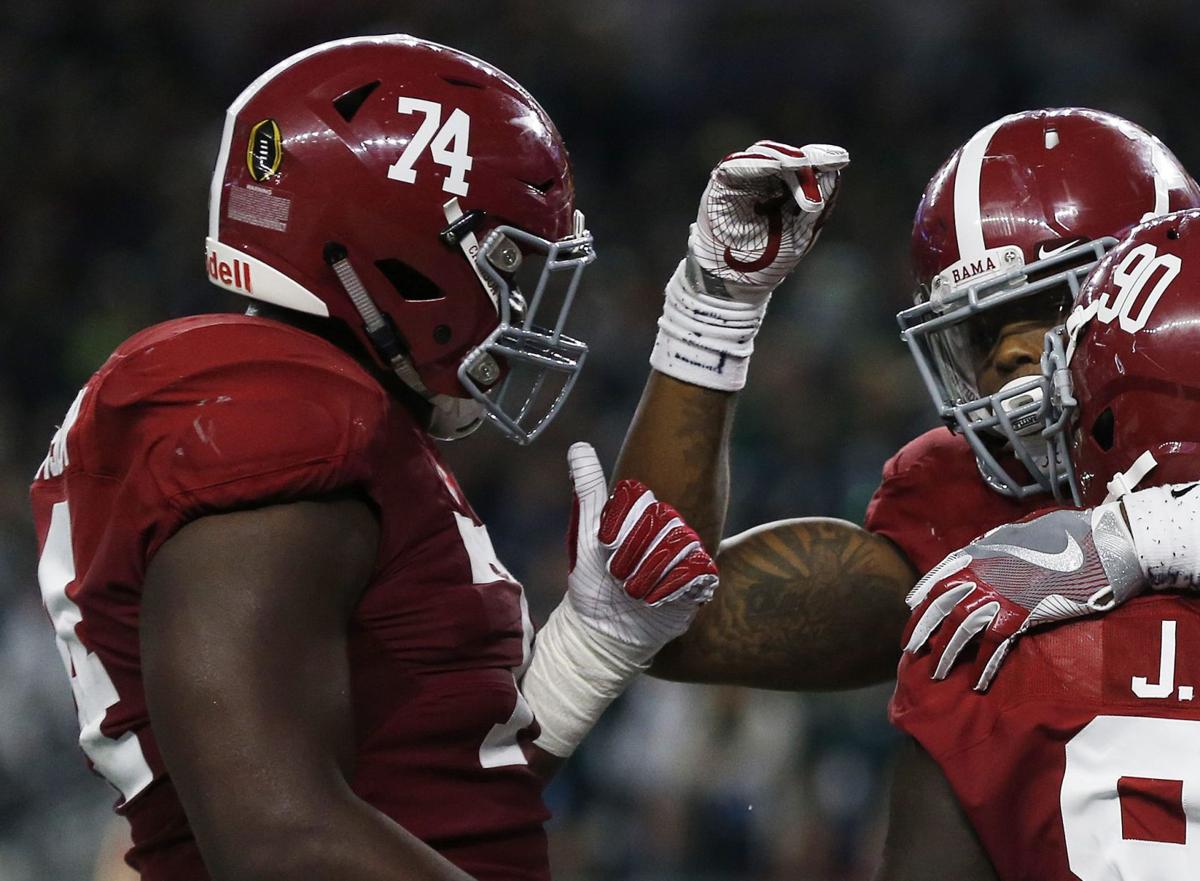 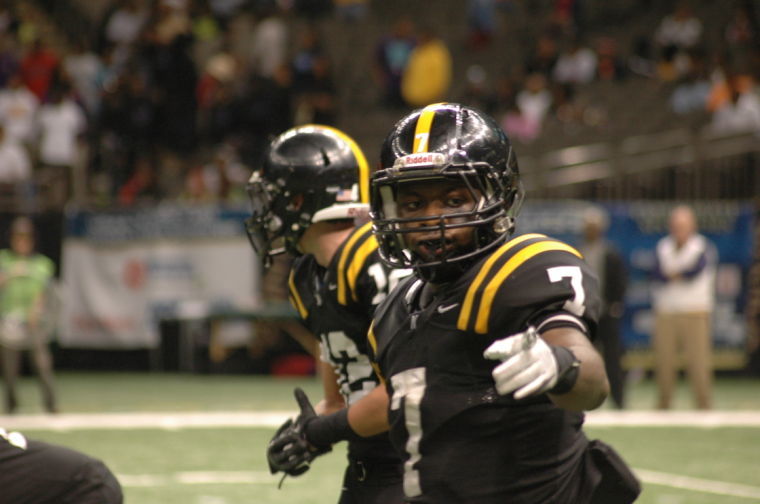 Laurence "Hootie" Jones lines up at receiver during Neville's loss to Edna Karr in the Class 4A state title game last year at the Mercedes-Benz Superdome in 2014.

Laurence "Hootie" Jones lines up at receiver during Neville's loss to Edna Karr in the Class 4A state title game last year at the Mercedes-Benz Superdome in 2014.

Six Monroe police officers involved in the arrest of two Alabama football players turned up DNA evidence and reported observing high-powered handguns and marijuana in plain view in the suspects’ automobile, as revealed in a Monroe police case file, though Fourth Judicial District Attorney Jerry Jones took a pass at prosecuting the pair.

The six police officers' reports entail a number of new details in the case, including conflicting statements made by the four men in the automobile, which included the two Alabama football players who prepped at high schools in Ouachita Parish.

The DNA samples and other evidence gathered by police will not be entered as exhibits in a criminal prosecution of Cameron Robinson, a West Monroe product who’s a starting offensive lineman for the Crimson Tide, and Laurence "Hootie" Jones, a former Neville Tiger and currently a backup safety at Alabama.

The two football players faced charges stemming from their May 17 arrest at Forsythe Park in Monroe where police officers found them in a rental car with marijuana and handguns, one of which was reported stolen.

Jones, the district attorney, came under fire Monday when he told KNOE-News he would “take full responsibility for dismissing this” to protect the two suspects since they played football.

"I want to emphasize once again that the main reason I'm doing this is that I refuse to ruin the lives of two young men who have spent their adolescence and teenage years, working and sweating, while we were all in the air conditioning," Jones told KNOE.

The district attorney's decision to keep the case away from a Ouachita Parish grand jury was reached amid ongoing scrutiny over Jones' recent handling of an investigation into controversy surrounding Fourth Judicial District Court officials, including Jones' contradictory statements about that investigation, its reports, his filing of misleading court documents as well as his decision to keep this newspaper's criminal complaint out of the hands of agencies investigating the court.

In the case against the two football players, the district attorney's filings stated a “prosecution (was) declined per insufficient evidence.”

The Monroe police case file on Robinson's and Hootie Jones' arrests revealed a number of details about the discovery of marijuana and handguns in a rental car occupied by Robinson, Hootie Jones and two other individuals. The Ouachita Citizen obtained the police case file from the district attorney on June 3, but Jones advised the newspaper at that time not to publish any material from the case file until he had decided whether to pursue charges.

According to Monroe Police Sgt. Tommy Crowson's report, he first observed the silver 2016 Chevrolet parked at Forsythe Park around 2:30 a.m., long after the park was closed. The car, which Crowson said emitted a “strong” marijuana odor, was occupied by four black males. Robinson, who was seated in the driver's seat, told police the odor of marijuana coming from his car was an “old odor” and that they were waiting for some “girls” to meet them at the park.

The other two individuals in the car with Robinson and Hootie Jones were Steven A. Jones and Jaquez T. Splond, both of whom played for the West Monroe Rebels football team. The Monroe police case file referred to Steven Jones and Splond as “informants” who were released at the time of Robinson's and Hootie Jones' arrest.

According to Monroe police officer Meagn Meador's supplemental report, Splond said they had “come to the park to meet up with females and smoke marijuana.”

Crowson's report stated he first observed a TAURUS .9mm handgun in Hootie Jones' lap after shining his flashlight into the car, which contradicted information in statements made to AL.com by Hootie Jones' and Robinson's defense attorney, Joe D. Guerriero, of Monroe. Guerriero told AL.com that police became aware of the handgun only after Jones “called it to the police's attention.”

After discovering the handgun in Hootie Jones' lap, Crowson held all suspects at gun point until other police units arrived. After Hootie Jones was removed from the passenger seat, police found a “small amount” of marijuana on his seat.

“Jones admitted ownership of his gun and said he had the gun for protection,” stated Crowson's report.

“He (Hootie Jones) stated that was from earlier when he was smoking,” stated Jackson's report. “When asked about the gun, he stated it belongs to a family member and he was carrying it for protection. Jones stated he did not know anything about other weapons in the car.”

In light of Robinson's offseason shoulder surgery, Monroe police carefully removed the 6-foot-6-inch and 320-lb. lineman from his rental car and placed him in handcuffs and later into a squad car.

“I (Monroe police officer Tobyn Berry) secured Robinson with 2 pairs of handcuffs due to his size and his advising me that he had recently had shoulder surgery,” stated Berry's supplemental report. “Once he was secured Trooper J.C. Chapman and I assisted him to his feet as carefully as we could. We then placed him in the back seat of my unit 2523 and advised him of how to sit to be the most comfortable.”

After Robinson was removed from the car, police observed a bag of marijuana on the floorboard in front of the driver's seat. Under Robinson's seat, police found a Glock .45 automatic handgun, which was reported as stolen by the sheriff's office in Baldwin County, Alabama.

“Robinson was advised of his rights and denied knowing about the gun,” stated Crowson's report.

According to the Monroe police case file, two DNA swabs were collected from the Glock found under Robinson's seat. DNA swabs from Monroe police officers, who handled the Glock and other items in the car, were also taken to eliminate their DNA samples in the event that an analysis was undertaken at a criminal laboratory.

The district attorney speculated that DNA evidence linking the handgun to Robinson would not be sufficient to pursue prosecution. Jerry Jones also cast doubts as to whether his office was able to successfully prosecute the charge against Robinson on illegal possession of a stolen firearm.

"Even if I could get DNA showing that he had touched it at some point in time, that does not mean that he obtained it,” Jones told KNOE. “It does not mean it was possession of stolen things because I must show that the person possessing an object that is stolen knew or should have known."

Some details in the Monroe police case file add further confusion to the matter. In his full arrest report, Crowson noted a discrepancy between statements made by Steven Jones and Splond to police as to the ownership of the Glock.

“Officer Jackson questioned one of the rear passengers, unknown which one, who said the Glock belonged to Robinson,” stated Crowson's report.

But when Crowson spoke to Steven Jones and Splond, the pair denied knowledge of the gun.

“I then spoke with both rear passengers who said they were there waiting for some females and denied knowing anything about the marijuana and guns,” stated Crowson's report.

Jackson's own supplemental report did not detail who he questioned or who may have identified the Glock as Robinson's: “I then asked the (unidentified) backseat passenger were there anymore weapons inside of the vehicle that the officers on scene should be aware of for our safety, in which time the backseat passenger stated he does not know because it was not his vehicle and was unaware of the first weapon that was located.”

None of the responding police officers' reports indicate Steven Jones was specifically questioned or what his answers to questioning revealed.

Meador's supplemental report stated Splond was unaware of another firearm when questioned.

“I (Officer Meador) asked Splond who owned the firearm that was found under the driver('s) side seat, Splond stated he was unaware there was a firearm in the vehicle,” stated Meador's supplemental report.

The case by Monroe police was closed at the time of arrests and forwarded to the district attorney's office.

PIGSKIN PREVIEW: Rams look to dish out punishment in 2020

Ouachita vs. Neville canceled after Lion players exposed to COVID-19

The longstanding rivalry between Neville and Ouachita is put on pause thanks to COVID-19.  Read more

Marion man accused of trying to break in to WM store, church

MPD arrest man for threatening to shoot, 'smoke' his girlfriend