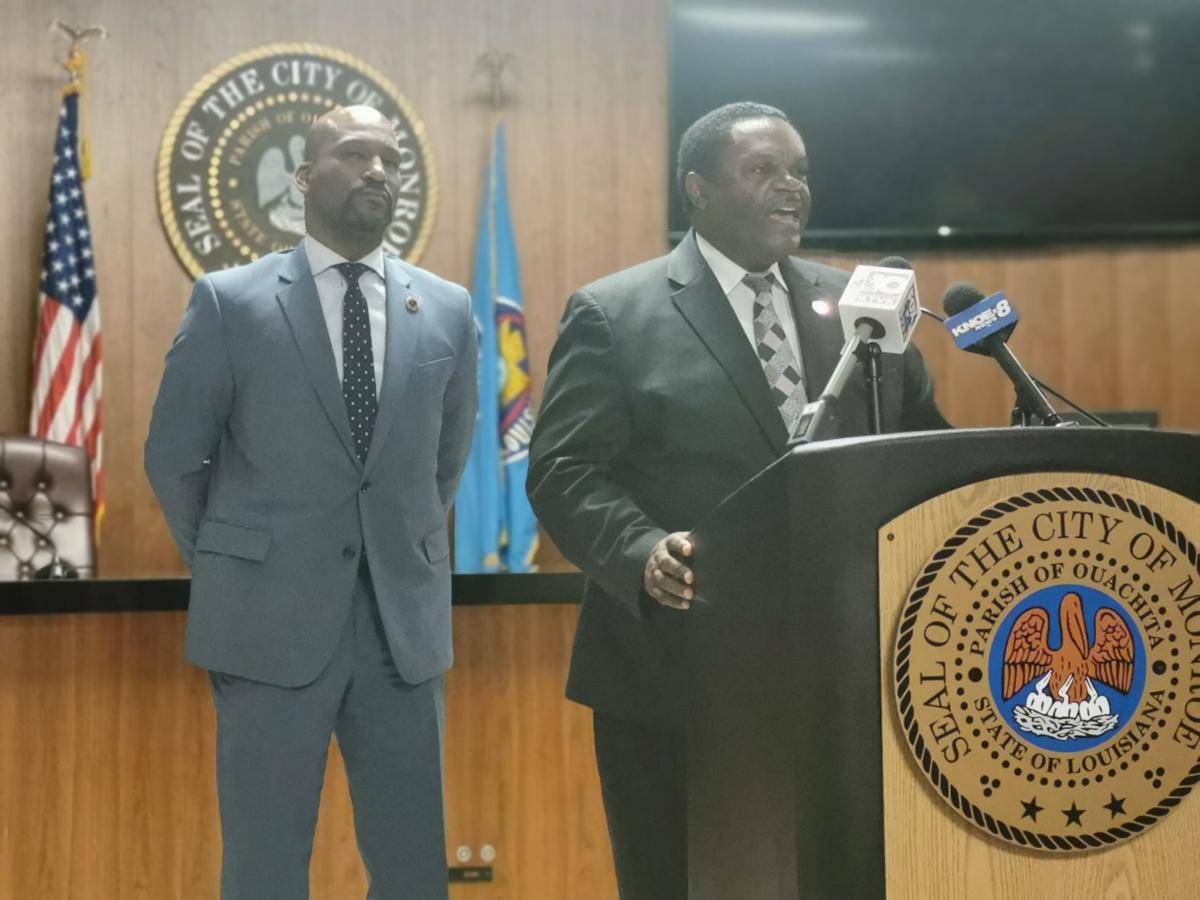 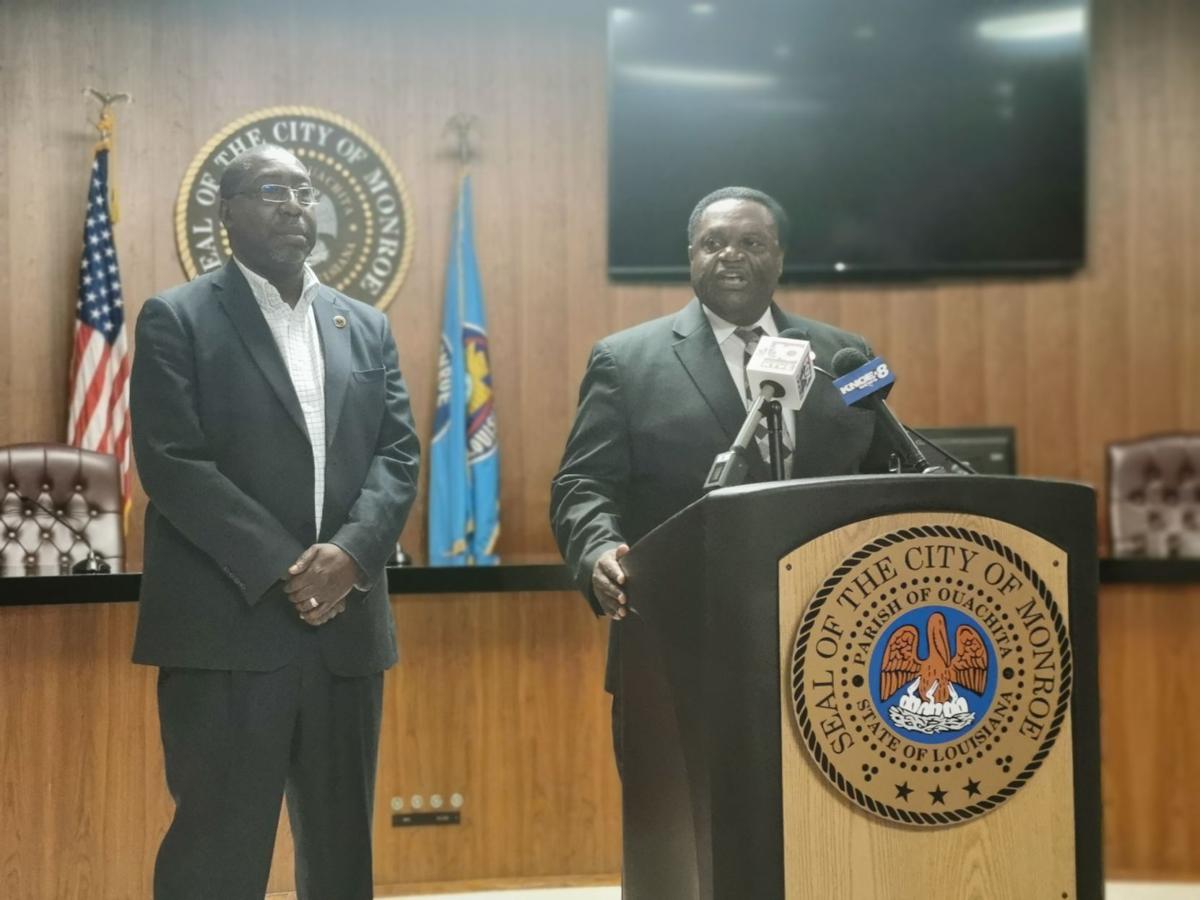 Monroe Police Chief Eugene Ellis announced last week his plans to retire Feb. 1 after serving for 33 years in the department.

“All good things must one day come to an end,” said Ellis, before thanking the men and women at the department.

During the Jan. 15 news conference, Mayo attributed a significant decrease in crime in Monroe in 2018 to Ellis’ leadership. Crime levels in 2019 would be shown to have dropped, too, Mayo claimed.

“This all started six months ago,” Ellis said. “I had a long conversation with my wife. We used to say that if there ever came a time where it was hard for me to get out of bed that would be an indicator it would be that time. During thanksgiving, we had family. It was hard to get out of bed. I had grandchildren looking for papaw. I took more days off for Christmas. And it was difficult to come back to work. I can’t describe it, but when that moment comes, you’ll know. That moment has come for me.”

After entertaining applause for Ellis, Mayo declared his plans to appoint Brown the interim chief. It is widely known that Mayo has long sought to make Brown the department’s police chief. Brown is a personal friend of Mayo’s and once worked as the mayor’s personal driver.

“This is not something taken lightly,” Brown said.

Mayo’s public relations coordinator, Rod Washington, later asked the mayor to reiterate Brown’s credentials for audiences on social media. Among other achievements, Mayo pointed out Brown was expected to obtain a master’s degree in public administration from the University of Louisiana-Monroe in May.

Mayo outlined the process to select a permanent police chief. He would ask the Monroe Municipal Fire and Police Civil Service Board to issue a call for a police chief exam. The exam would be administered to eligible candidates. After the exam scores are reviewed, a list of finalists would be presented to the mayor for interviews and selection. The mayor would finally recommend an appointment of one individual to the Monroe City Council for consideration as the department’s permanent police chief.

In late 2017, Brown applied for the position of police chief before Mayo ultimately selected Ellis. Brown’s bid initially failed to meet the qualification requirements set by the civil service board, though he later filed a lawsuit and was granted an opportunity to take the police chief’s exam. Specifically, the civil service board had disputed Brown’s claim that he had at least 10 years of responsible experience in law enforcement.

As reported by The Ouachita Citizen in lengthy news reports, Brown was the subject of an Internal Affairs investigation and received reprimands during his time at Metro Narcotics, stemming from allegations he committed payroll fraud and improperly transported a methamphetamine lab.

Brown has characterized the controversy surrounding his time at Metro Narcotics as “rumors.”

This newspaper’s coverage of his controversial time at Metro Narcotics was based on documents from his personnel file, a lengthy Internal Affairs investigative report and interviews with officers and Brown’s supervisors.

At Mayo’s instruction, the three Monroe police officers assigned to Metro Narcotics, including Brown and Ellis, were removed in May 2014.

At the time, an Internal Affairs investigation was conducted into Brown’s performance as a Metro Narcotics officer, specifically investigating what Mayo called “claims of double dipping,” or whether Brown had committed payroll fraud.

During interviews with The Ouachita Citizen at the time, Mayo said the withdrawal of Monroe police officers from Metro Narcotics had “absolutely nothing” to do with the payroll fraud allegations against Brown. Mayo told The Ouachita Citizen he ordered the police officers’ removal because of Brown’s claims that he and Ellis, now the interim chief, were discriminated against at Metro Narcotics because they were the only black men in the unit.

Brown also was reprimanded at Metro Narcotics for unsafely transporting “volatile chemicals” from a methamphetamine lab to Metro Narcotics’ offices, endangering other officers’ lives, as well as for failing to follow proper procedures in filing seizure warrants, which resulted in a loss of funds for the unit.

The Internal Affairs investigation ultimately determined the allegations that Brown committed federal payroll fraud were baseless, though several discrepancies were discovered in Brown’s time sheets. In 2012, Brown worked 32 cases, closed 28 cases and made 15 arrests. He requested 460 hours of overtime in 2012.

The apparently excessive overtime pay requests stemmed from Brown’s time sheets in 2013, in which he filed nearly the same amount of overtime as in 2012 — 452 hours, though he worked only 6 cases, closed 3 cases and made only 3 arrests.

The Internal Affairs investigation described one of those cases as a “ghost case,” since Brown requested 140 hours of overtime for it, though several discrepancies with the case were noted.

The Internal Affairs investigation also revealed that other officers at Metro Narcotics believed Brown was assigned to the unit so he could report on its operations to Holmes or Mayo.

While Brown was assigned to the Metro Narcotics Unit, he also served as the police department’s public information officer, coordinating answers to media inquiries and conducting interviews, both for local newspapers and local television news stations.

Monroe Police Cpl. Reginald "Reggie" Brown is no longer serving as the police department's interim chief as of Friday afternoon when Mayor Fri…