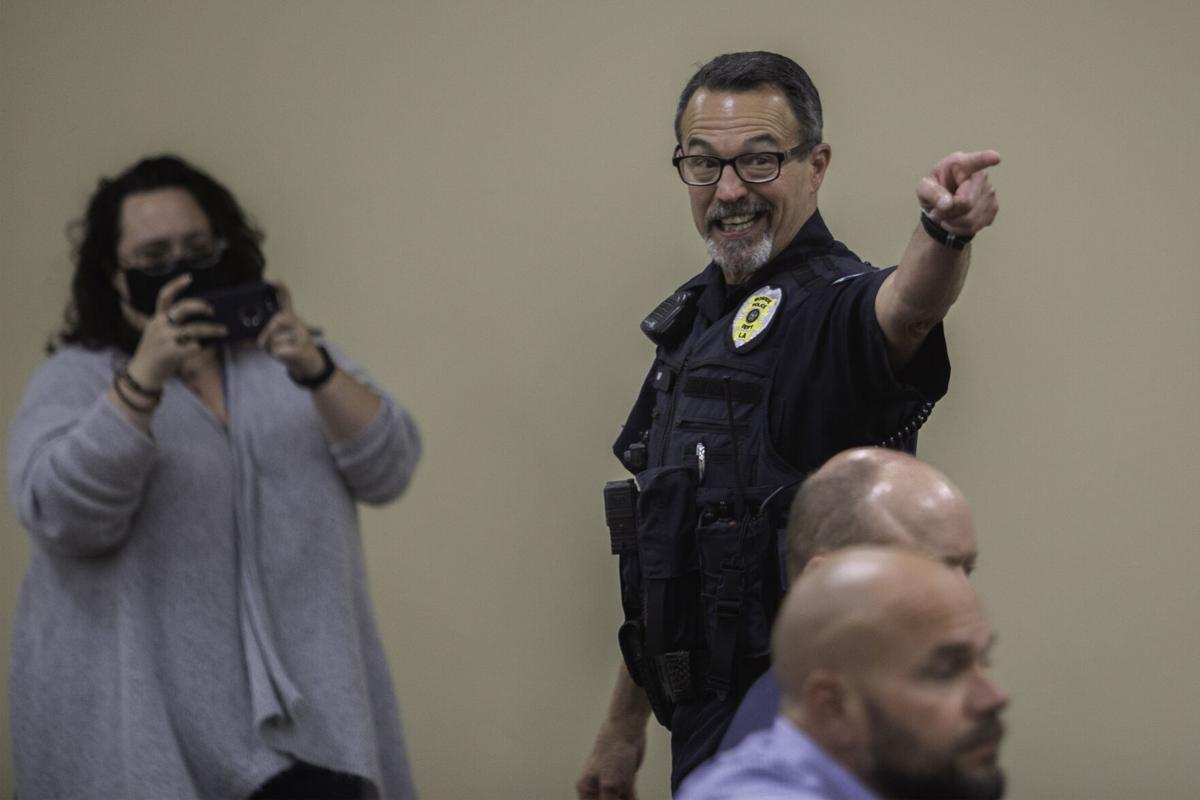 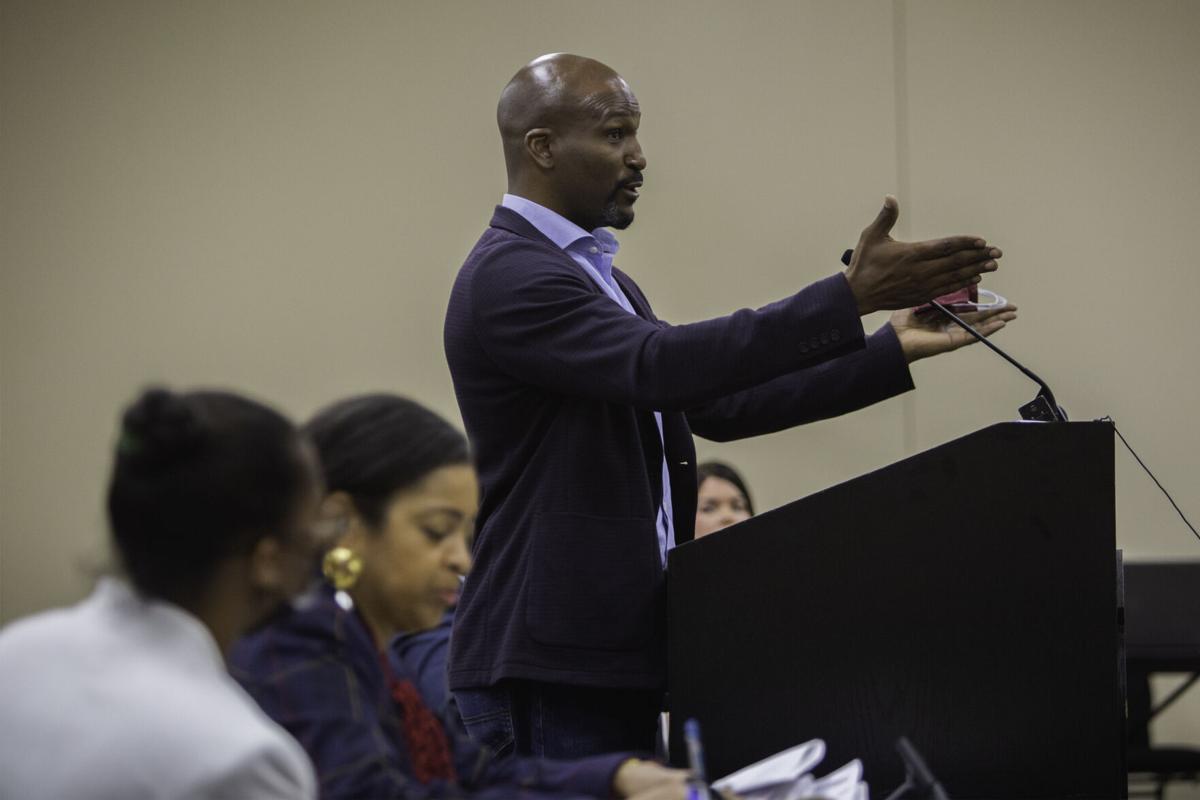 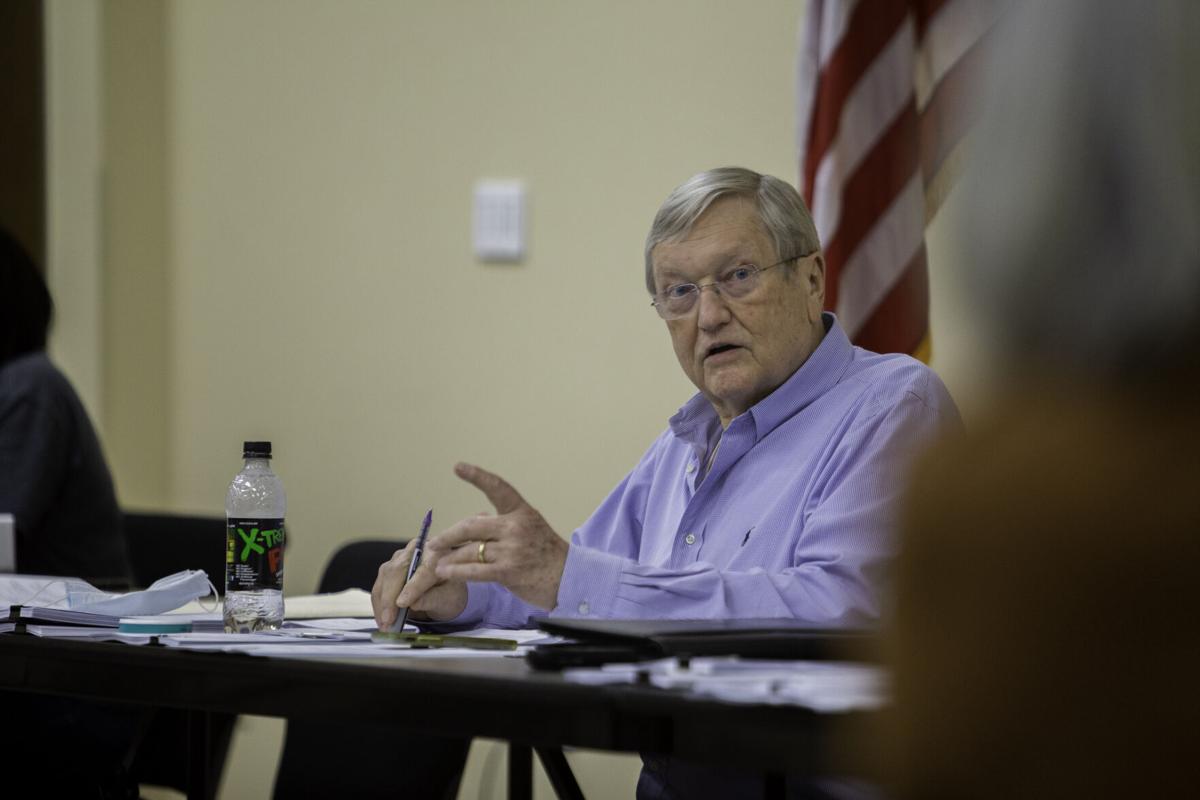 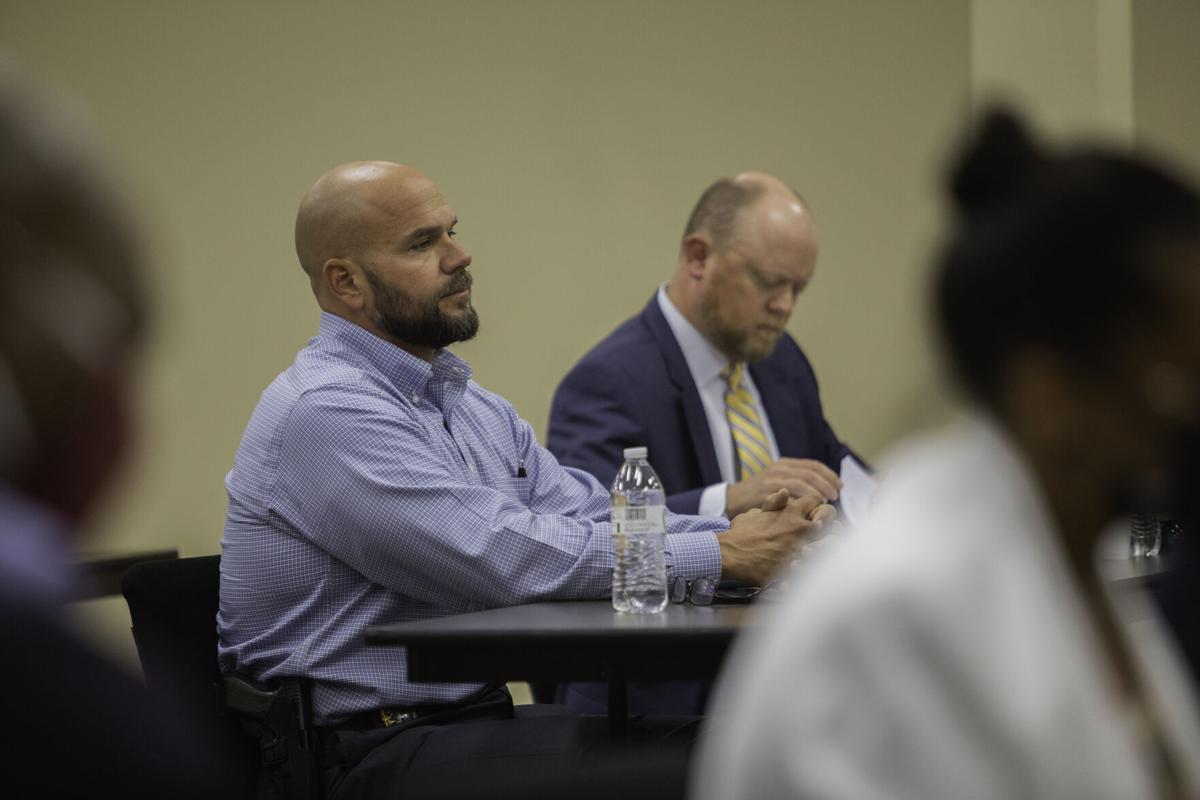 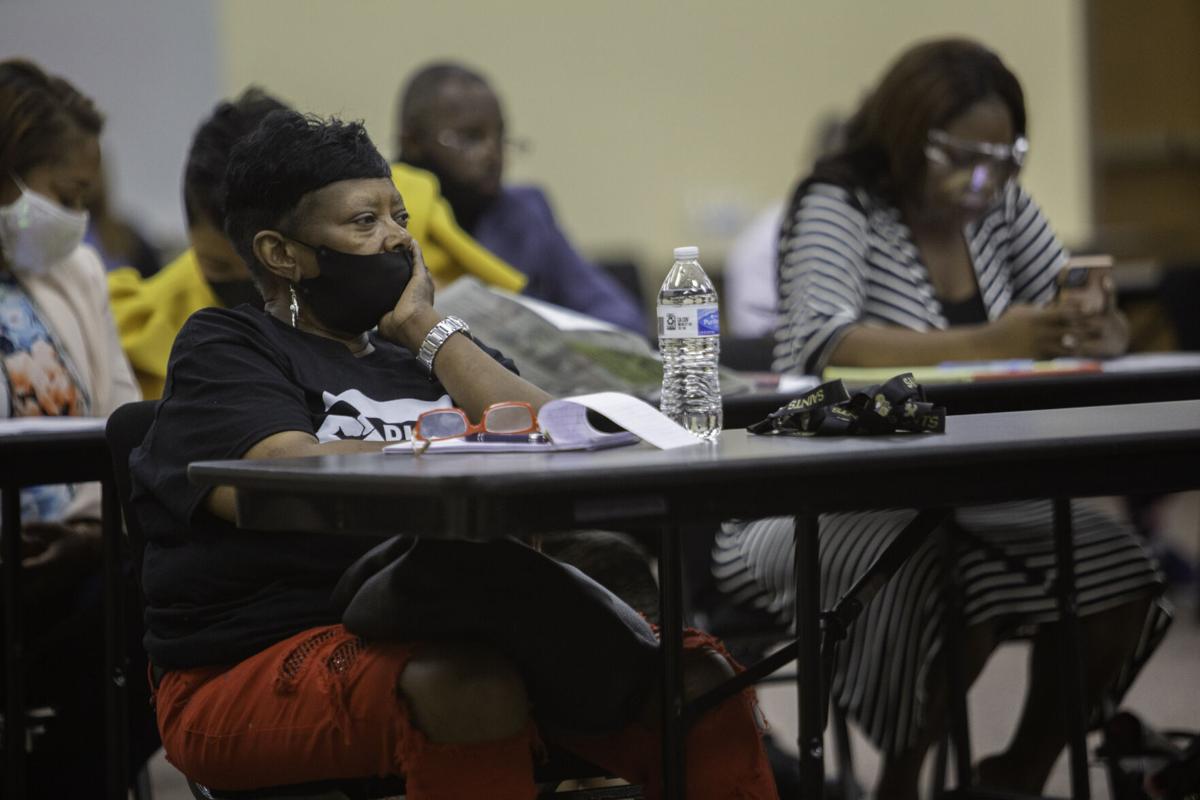 Former Monroe Police Cpl. Reggie Brown says the chairman of Monroe’s civil service board should have no say in whether the former officer gets his job back because of the chairman’s supposedly racist and politically motivated views and social media posts.

At a hearing before the Civil Service Board last week, Brown’s attorneys claimed Cordell had taken to social media to make “disparaging remarks” about former First Lady Michelle Obama and exhibited a bias against African-Americans.

Monroe attorney Carol Lexing, who represents Brown, referred to screenshots of Facebook posts and comments allegedly made by Cordell and claimed the items showed Cordell could not be fair and impartial to Brown, who is black.

Brown was fired last November by now-Monroe Police Chief Vic Zordan. In his letter terminating Brown’s employment, Zordan wrote that Brown purposefully waited until after the city’s mayoral election last July before asking authorities to investigate an excessive force complaint against some of the department’s officers.

In early 2020, Timothy Williams complained that former Monroe Police Cpl. Jared DeSadier beat him and kicked him while he was lying and handcuffed during an arrest. DeSadier has since resigned from office and now faces felony charges of malfeasance in office and second-degree battery.

According to Zordan, Brown waited to act on Williams’ complaint for personal gain. Last year, Brown was serving as the department’s interim police chief under then-Mayor Jamie Mayo, who sought re-election. Brown did not forward Williams’ complaint to investigators until after Mayo lost the election to businessman Friday Ellis, according to Zordan. As mayor, Ellis removed Brown from the interim chief position and ultimately appointed Zordan.

“You knew the Williams matter was a very serious case and possible improper exercise of police force against a civilian,” stated Zordan’s Nov. 23, 2020 letter terminating Brown’s employment. “Likewise, you purposely delayed contacting the LSP (Louisiana State Police) and sending the Williams’ matter to the LSP because of a mayoral election in order to protect your own, personal interests in becoming the Chief of Police.”

Brown has since filed an appeal of his termination with the Civil Service Board.

Last week, Brown and his attorneys argued Cordell should recuse himself from presiding over Brown’s appeal because of the chairman’s support of the “unfair, unjustified termination of Cpl. Brown.”

“We don’t feel he can be fair and impartial based on his past actions,” Lexing said.

Brown and his attorneys enjoyed vocal support from Gwendolyn Dickson, a longtime Mayo supporter, who would occasionally call out from the audience, “Out of order,” “Fact,” “Thank you,” and “Amen,” in response to arguments made by Brown’s attorneys. Dixon wore a black t-shirt that stated, “Black Lives Matter” on the front and “Reggie Matters” on the back.

Last week was not the first time Brown claimed he was the subject of racial discrimination. As reported by The Ouachita Citizen in 2014, Brown claimed racism hemmed him in during his stint as a Metro Narcotics Unit agent. At that time, Brown was investigated by Monroe Police Internal Affairs for committing payroll fraud, specifically for billing 452 hours of overtime pay for casework in 2013 when he had only handled six cases that year. The Internal Affairs division determined that allegations Brown possibly committed payroll fraud were baseless though several discrepancies were discovered in Brown’s time sheets. Brown claimed he came under scrutiny only because “there is a severe double standard when it comes to treatment of Caucasian agents and African American agents.”

During the hearing last week, Steven Oxenhandler, an Alexandria attorney who is representing the city in the Brown case, knocked efforts by Brown and his attorneys to suggest racial discrimination would control the appeal hearings.

“This is beyond the scope, bringing race into this issue,” said Oxenhandler, addressing the Civil Service Board. “This is really way beyond. You shouldn’t put up with this.”

According to Oxenhandler, Brown and his attorneys were “willing to throw anything against the wall to gain an advantage.”

Monroe attorney Tommy Hayes IV, who represents Cordell, held up copies of Cordell’s alleged Facebook posts and comments and said, “These don’t have anything to do with Cpl. Brown.”

As evidence supporting the motion to recuse Cordell, Lexing referred to a text message Brown received from Monroe Police Officer Ben Baw, who previously served on the Civil Service Board as the police department’s representative.

“We have a text from Ben Baw, who says, ‘Wow, I think he needs to be replaced,’ referring to Chairman Hardeman Cordell,” said Lexing, noting that Baw’s alleged text message challenged Cordell’s ability to be impartial.

Baw was present at the meeting and appeared agitated by Lexing’s disclosure of the text message. Baw later approached the stand and weighed in on Brown’s motions.

“All this other stuff has nothing to do with me or any of the other people,” Baw said.

“As far as the text, sometimes you have to tell people the things they want to hear,” Baw added, before looking at Zordan and walking away.

Instead of allowing his attorneys to represent him, Brown later took to the stand himself to argue his appeal. According to Brown, Baw had no right to question his case and could not be trusted because of a past investigation of Baw for failure to comply with the department’s truthfulness policy.

“He lied to city attorney Angie Sturdivant,” said Brown, referring to some alleged attempt to have Brown investigated. “I have that entire investigative file related to that.”

Of Baw’s comments to the Civil Service Board, Brown said, “It is in my opinion, racist and biased.”

“This is why I’m here today. Ben Baw tried to get me investigated. This has been the story of Reggie Brown’s career.”

At that point, the hearing devolved into a shouting match, with Baw pointing at Brown and Lexing yelling at Baw, “You are out of order. You need to sit down. Go sit down, Baw.”

Cordell eventually regained control of the hearing, at which time Brown pointed at Cordell and said, “You were complicit in this.”

Cordell declined to recuse himself and defended his role on the Civil Service Board by referring to his past years of service and his oath of office.

This was the first time in his career that someone had tried to recuse him, Cordell said.

Monroe attorney Elmer Noah, who serves as the Civil Service Board’s legal counsel, noted that state law did not mandate Cordell’s recusal. Only a board member could recuse themselves, Noah said.

“The board cannot force the recusal of another board member,” Noah said. “There is recourse, but that recourse, if there is proof or evidence, could be raised on appeal to the district court, not to this board.”

On Tuesday, the Civil Service Board agreed to honor Brown’s request to issue subpoenas to 34 people, including Mayo and the district attorney, to testify at hearings on Aug. 18 and Aug. 30 pertaining to Brown’s termination.

“Now that we have appeal dates, and agreement from everybody on both sides, the subpoenas will be issued,” Noah said.