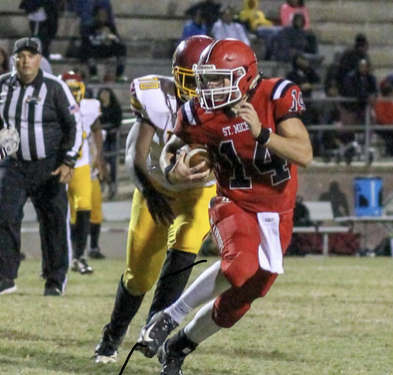 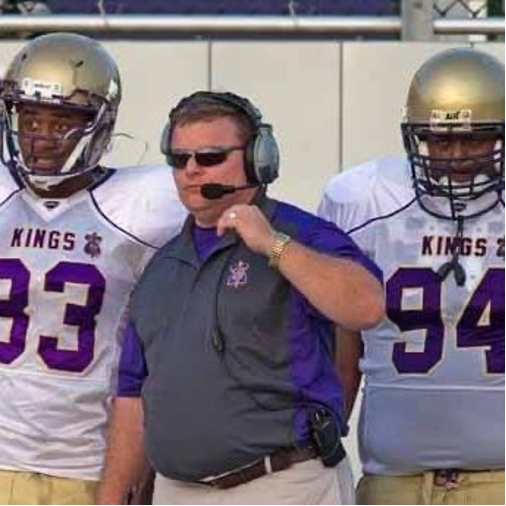 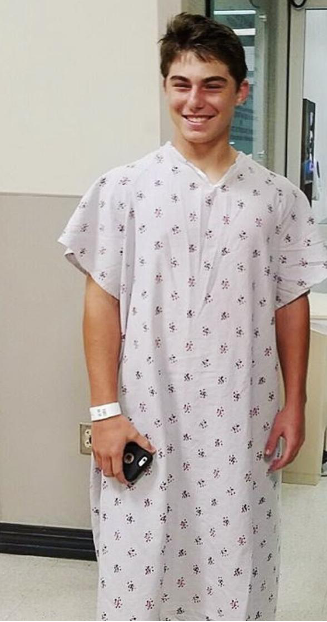 EDITOR’S NOTE: This is the first installment in a two-part series

Lance Garafola lay on the turf of a high school football field wondering what had happened and where the feeling in his lower body had gone. The crowd and both sidelines fell silent as trainers rushed onto the field.

Garafola was a sophomore at St. Michael the Archangel High School in 2016 when a Loranger High player blind-sided him on an onside kick. Paramedics were brought in when Garafola said he couldn’t feel his legs, but they were hesitant to move him because of the possible severity of his injury. Silence and fear hung in the air for over an hour before they raised him onto a stretcher and Garafola threw up his thumb to let his teammates and fans know he was conscious.

He was taken to a local hospital and diagnosed with a concussion. The loss of feeling in the lower half of his body, which lasted for a little over 5 minutes, was created by the concussion and the shock from the hit to his head.

Nearly every football fan knows that concussions are a serious problem in the NFL and in college games, but less attention has been paid to the dangers facing younger athletes. Experts say high school players also face some degree of risk every time they step on the field.

The hits are not usually as hard in high school as the one that left Garafola temporarily paralyzed, but medical surveys indicate that 67,000 concussions are diagnosed nationwide among high school football players each year, with many more occurring without being evaluated.

One concern is that few high schools can afford the kinds of sophisticated safety measures that NFL and college teams now take. Garafola and others also say that many high school players are reluctant to report concussions, even when they cause problems like short-term memory loss, for fear of being sidelined for good.

As a result, concussions can be difficult for high school coaches — and parents — to track, and concerns about possible brain injuries are contributing to a gradual decline in the number of high school students playing football.

Medical researchers have evaluated the brains of former professional football players and found signs of chronic traumatic encephalopathy, or CTE, a degenerative disease caused by hard hits to the head. The disease destroys brain cells and can lead to depression, anxiety, aggression and suicidal tendencies. CTE can be diagnosed only after death when brain tissue can be removed and evaluated.

Damage can occur as early as high school when brains are not fully developed, though some experts say it might take years of repeated hits to the head in college and pro ball for the disease to become severe.

The Louisiana High School Athletic Association does not keep records of concussions across all schools. Lee Sanders, the assistant executive director, said the organization requires coaches and trainers to take an annual safety course so they can tell students what a concussion is, how it feels and why they should speak up if they believe they are suffering from one.

Andy Bryson, the owner of Louisiana-Texas Gridiron Football, a website based in Denham Springs, said the LHSAA and many high schools need to do more to guarantee the safety of student athletes.

Bryson, a former high school and college assistant coach who is one of the top talent scouts in the state, said high schools in Florida, Texas, Ohio and California hire fully trained position coaches, while the assistant coaches at many Louisiana schools are teachers who help out with the football team on the side. “They might hire a teacher who knows something about Madden football and plays to be a coach,” he said.

It also can be hard for the players to tell when they have concussions, Bryson said. “You don’t actually know you have a concussion until you’re over there throwing up on the sidelines,” he said.

Nick Monica, the head football coach at Rummel High School in Metairie, said one or two of his players have mild concussions each year. The school gives all of its players a baseline mental acuity test when they make the team, and if they show signs of a concussion later, they take the test again.

Monica said some concussions occur when players hit their heads on the ground.

While the helmets used at all levels of football now provide more protection against head injuries, most high schools lack the funding to provide devices, like mouth guards that can monitor the pressure from big hits, that the pros and big colleges use. Rural and inner-city high schools have even fewer resources to combat the problem.

“You gotta have money to get that concussion stuff down right,” said Lamontah Curry, who had several concussions while playing wide receiver for Pensacola High School in Florida.

Louisiana high schools get some help from Tulane University’s sports science department, which puts on an annual seminar about concussions for high school athletes in various sports.

“They kept showing football players mostly who would get concussions in games and then later on down the line they would have really traumatic injuries,” said Caleigh Foto, a kinesiology major at LSU who went to the seminar when she was in high school.

“I thought it was really beneficial every year that we did it because normally you just think you hit your head and it’s going to heal just like a bruise,” she said.

A study from the Institute of Medicine, a non-profit group formed by the National Academy of Sciences, found that concussion symptoms last for two weeks in most patients while more than 20 percent of people can experience symptoms for months or years.

Nick deBouchel, a construction management major at LSU, has had his share of concussions. He was a linebacker at Oak Ridge High School in Conroe, Texas whose job was to pursue and tackle the ballcarrier every play.

“Concussions are no joke,” he said. “You kind of forget where you are for a little bit. Once you realize what’s happening, you involuntarily tear up because your body doesn’t know what’s happening. I’ve had one where I woke up and everything was blood red as if someone put a red filter over my eyes.

“My worst one was when I was a senior,” deBouchel said. “After getting hit, I apparently played the rest of the game, and then I started crying once everything set in. I had to ask my teammate who we were playing and what the score was. Amnesia definitely happens if it’s bad enough.”

Garafola said he hid some of his concussions so he could keep playing football.

Jessica Speziale and Henry Weldon contributed to this story.