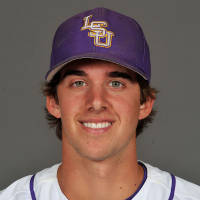 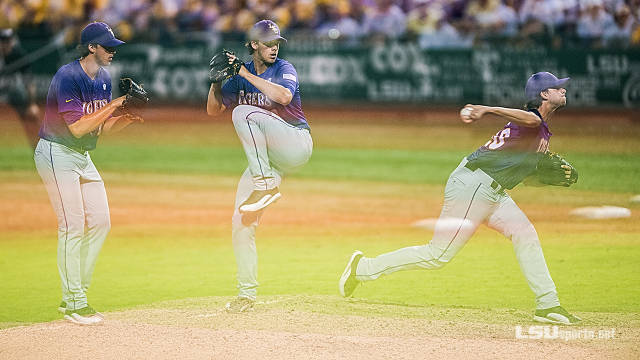 Aaron Nola was electric on Saturday night at The Box.

Aaron Nola was electric on Saturday night at The Box.

All-America pitcher Aaron Nola retired 17 of the final 18 batters he faced to lead the LSU baseball team past second-seed Houston, 5-1, and into the NCAA Regional final.

Nola (11-1) threw 7.1 innings, allowing one run on four hits with a walk and seven strikeouts. Houston's only run came on three of the hits in the bottom of the second. However, with the bases loaded, the righthander got Houston leadoff hitter Kyle Survance to foul out on a diving catch by LSU shortstop Alex Bregman.

After the second, Nola gave up only a one-out single in the fourth before being relived to a standing ovation in the bottom of the eighth. Zac Person and Joe Broussard combined to finish off the Cougars.

LSU (46-14-1), which was the visiting team in the winner's bracket game, broke a 1-1 tie with a pair of runs off Houston starter Jake Lemoine (6-7) in the top of the third inning. The Tigers added two more runs in the seventh, which was more than enough for Nola and the stingy Tigers staff.

First pitch for Sunday's nightcap is scheduled for 7:05 p.m. CT. The game will be streamed live on ESPN3.com and broadcast on the LSU Sports Radio Network beginning at 6:30 p.m. Should Houston advance to face LSU, the Tigers would be the home team; should SLU win the 2 p.m. game, the Lions would be the home team at 7 p.m.

While Nola settled down after a shaky second inning, the LSU offense continued to produce. Andrew Stevenson had three of LSU's 12 hits, while Sean McMullen was 2-for-4 with a pair of runs and Conner Hale collected two hits with two RBI.

The Tigers got on the board first in the top of the second when McMullen doubled to left-center and scored on a singled to center by Hale.

Houston (45-16) tied the game in the bottom half of the second when Justin Montemayor reached on a bunt single, advanced to third on a pair of groundouts and scord on a single to center by Michael Pyeatt. A single and a walk loaded the bases before Bregman sprinted to foul territory behind third base and made a diving catch to end the threat.