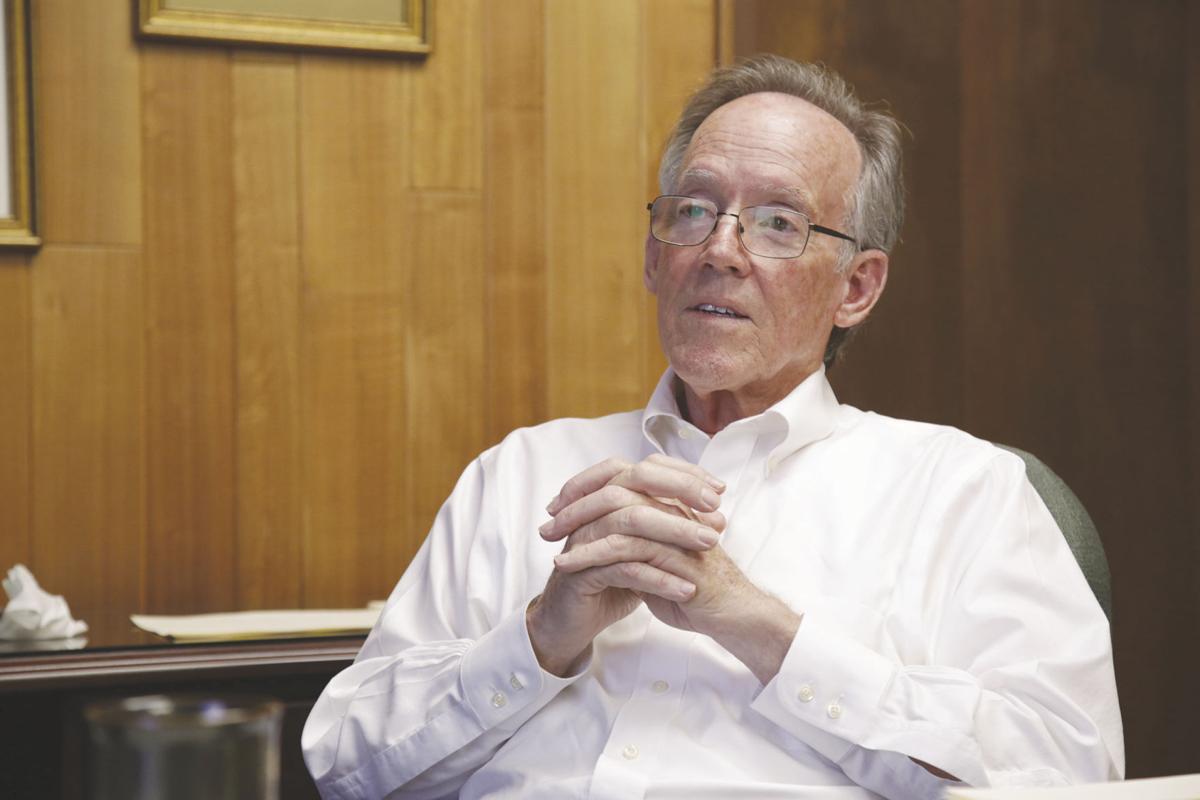 DAVE NORRIS, who has served as mayor of West Monroe for 40 years, prepares to retire at the end of this week.  Norris’ successor, Mayor-elect Staci Mitchell, is expected to take the oath of office on Sunday. (Citizen photo by Zach Parker) 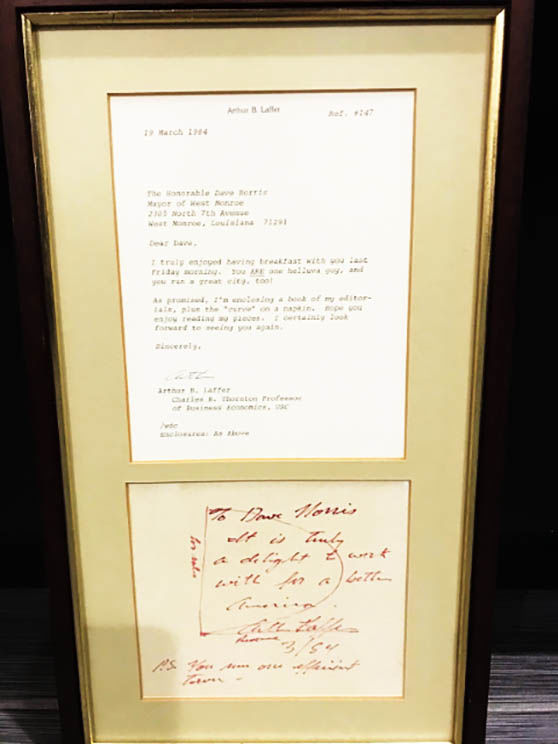 SHOWN IS a framed copy of a letter from Dr. Arthur Laffer as well as a cocktail napkin with a Laffer Curve drawn on it; Dr. Laffer mailed the items to Dave Norris after their meeting.

DAVE NORRIS, who has served as mayor of West Monroe for 40 years, prepares to retire at the end of this week.  Norris’ successor, Mayor-elect Staci Mitchell, is expected to take the oath of office on Sunday. (Citizen photo by Zach Parker)

SHOWN IS a framed copy of a letter from Dr. Arthur Laffer as well as a cocktail napkin with a Laffer Curve drawn on it; Dr. Laffer mailed the items to Dave Norris after their meeting.

After going almost two years without selecting anyone to receive the Presidential Medal of Freedom — the nation’s highest civilian honor — President Trump is making up for lost time with nine new recipients named since last November. Most are well known folks — Elvis Presley, Justice Antonin Scalia, Babe Ruth, Roger Staubach, Mr. Trump’s long-time golfing buddy, Tiger Woods, and Arthur B. Laffer. What? Arthur B Laffer. Who, you may ask?

Economist Dr. Arthur Laffer popularized the “supply-side economics” theory that led to the huge tax cut passed by Congress and signed by President Reagan in 1981. This theory, dubbed “voodoo economics” by George H.W. Bush during the 1980 Republican presidential primary campaign against Reagan, basically hypothesized that, under certain circumstances, cutting tax rates can actually raise tax revenue enough to pay for the cuts by stimulating increased economic activity. Candidate Reagan latched on to that idea and used it in his campaign.

That effect could be illustrated by a simple graph which has famously become known as the “Laffer Curve.” As legend has it, in the 1970’s Laffer drew it on a cocktail napkin to explain the concept to Donald Rumsfeld, at that time an aide to President Gerald Ford, and to Congressman Dick Cheney. What could make politicians in Washington happier, Democrats and Republicans alike, than a theory that says you can cut high marginal tax rates, especially popular with and beneficial to upper income earners, and those lower tax rates will can cause government revenue to go up enough to pay for the cuts?

Little wonder that the economist who articulated that concept most effectively, Arthur Laffer, was a popular speaker in certain circles. I met Dr. Laffer in March of 1984 when he gave a speech in Monroe to a large group of business and professional leaders. Following the speech, which was well received by the audience, I was invited by a bank president friend who had arranged Laffer’s visit to our community to have breakfast the next morning with him and Laffer — just the three of us. I was a small-town mayor and economics professor meeting with a popular, nationally known economist and policy advisor — what an opportunity!

Dr. Laffer and I are about the same age, so at breakfast he asked me to call him “Arthur” (which I could not do), and then he asked me a lot of questions about West Monroe, about my teaching, particularly my coverage of the supply-side idea and, specifically, the Laffer curve. I had not expected that question, so I stuttered and stammered a little before I finally confessed that I didn’t agree with his theory. He was not taken aback, although my banker friend, known to have a rather explosive temper, turned red in the face, but said nothing.

For the next 15-20 minutes we went back and forth on the subject. I was pretty nervous to be debating an advisor to presidents and an icon of conservative economic theory, but it was a good conversation. I hoped I defended my position well enough. I listened to his points, and he listened to mine. He was a friendly, open person, with a great smile. I liked him and wished that I had liked his economic theory as well.

Before we parted Laffer asked for my mailing address and said he would like to send me a collection of his writings on the subject, and I promised to read them, which I did. I said that I would like one more thing from him if he didn’t mind — a signed drawing of a Laffer curve done on a cocktail napkin. With a sincere chuckle he agreed to send both to me.

A package with bound copies of some of his writings, mostly newspaper editorials on the subject of “supply side economics,” arrived a few days later, along with a very complimentary letter about our community and my own copy of a Laffer curve, drawn in red ink on a cocktail napkin, and signed “Arthur B. Laffer.” (Drawing the curve in red ink was not meant to be ironic, but I did make that connection.) I had the letter and the drawing framed and put the frame on the wall in my office at the University, where it stayed until I quit teaching 19 years ago.

Although the Reagan tax cut that Congress passed in 1981 created such large federal deficits that Congress chose to pass tax increases in 1982, 1983, 1984, and 1987 to reduce the flow of red ink, Laffer has continued to be a prominent voice in conservative economic circles. He still insists that tax cuts can pay for themselves.

In 2011 Kansas Governor Sam Brownback hired Laffer to advise him on an economic plan for his state, and, at Laffer’s suggestion, massive tax cuts were passed in 2012 and 2013. The plan was such a disaster for Kansas that the Republican dominated state legislature overrode the governor’s veto and rolled back the tax cuts in 2017.

Laffer was an advisor on economic affairs to President Trump’s first presidential campaign, and strongly supported the tax cut passed by Congress in 2017. The non-partisan Congressional Research Service, an in-house think tank for Congress, issued a report in May of this year titled The Economic Effects of the 2017 Tax Revision. The report is available online, and you can read for yourself that the “Laffer Curve Effect,” a tax cut paying for itself by increasing economic activity, hasn’t materialized — again. In fact, the estimate is that only 5 percent of the possible lost revenue was made up by economic growth. That one tax cut is projected to increase the national debt by $1.9 trillion by 2028.

The National Museum of American History in Washington, D.C. has a display of the most famous hand drawn copy of the Laffer Curve on a cocktail napkin, signed by Arthur B. Laffer and originally given to Donald Rumsfeld. You can view it the next time you are in the nation’s capital, or you could save the trip and look at mine.

Dave Norris, who holds a PhD in economics, is a former mayor of West Monroe.

Submit a Letter to the Editor

The Bill Clark Memorial Golf Tournament will be held Sunday, Aug. 9 from 6 to 9 p.m. at the … Read more