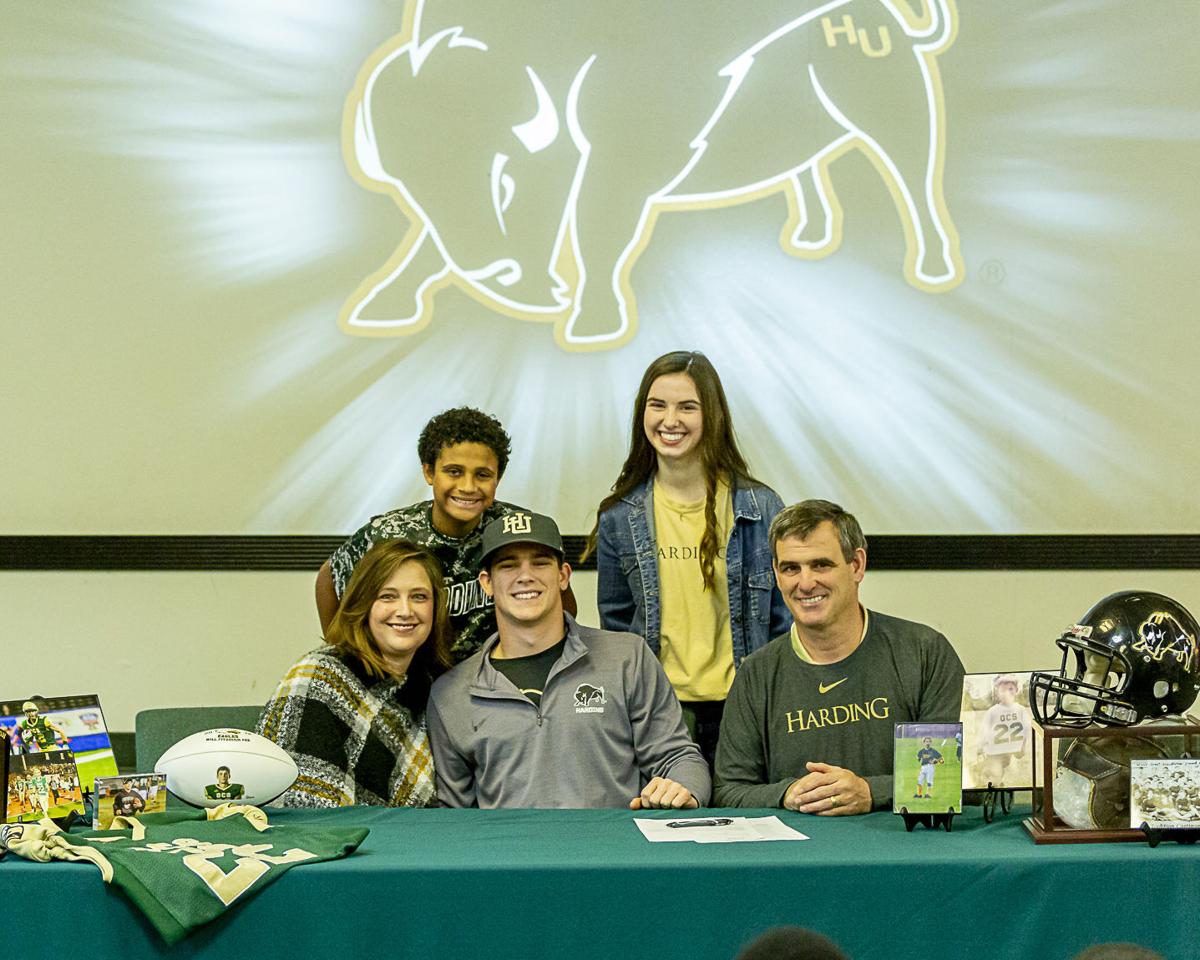 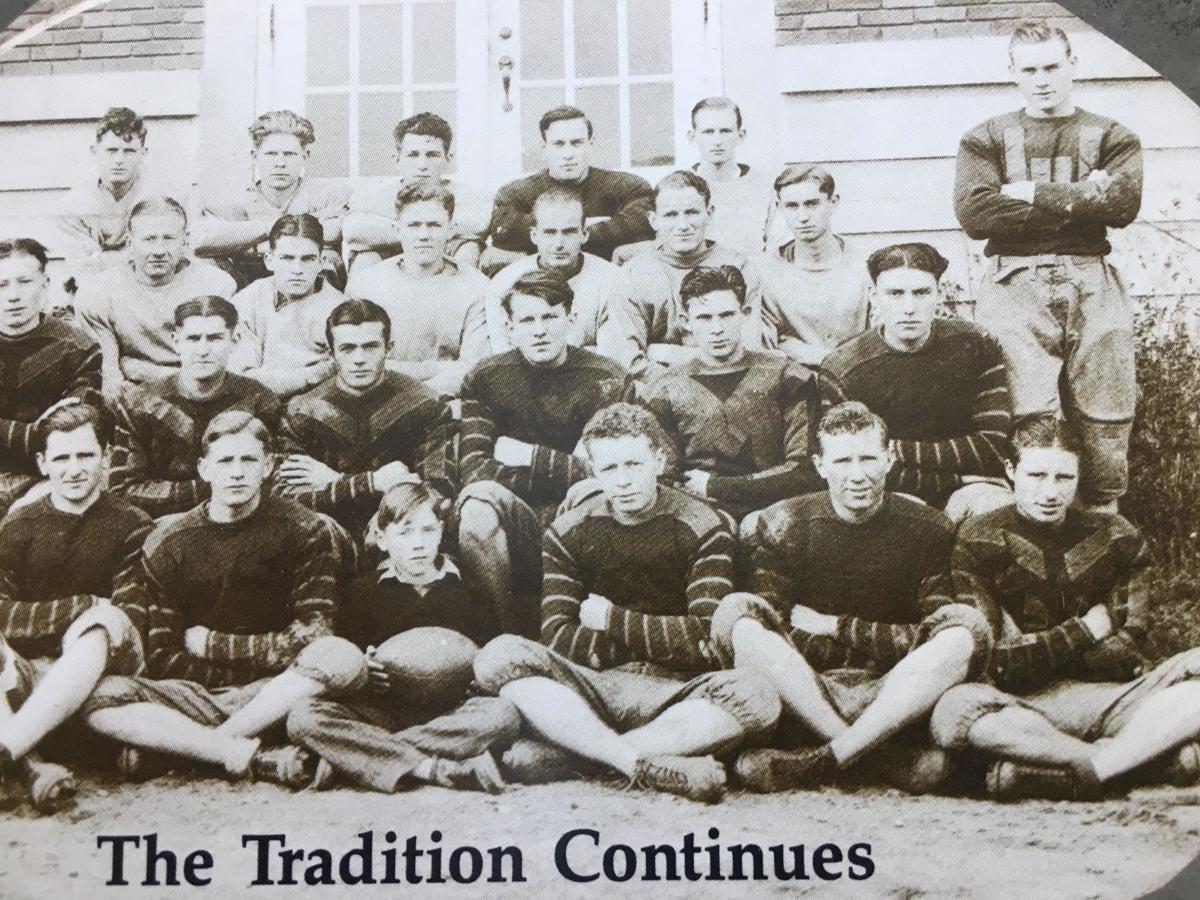 Varna Davis (Row 3, third from left) is pictured with the 1931 Harding football team. Davis grew up in Lockhart, a Union Parish community near the Arkansas state line. His granddaughter, Janna, also attended Harding where she met her husband, current Ouachita Christian football coach Steven Fitzhugh. Davis’ great-grandson, Grant Fitzhugh, is now a junior defensive back for the Bisons. Will Fitzhugh, Grant’s brother, continued the family tradition by signing a letter-of-intent to attend Harding on a football scholarship Wednesday morning. (Courtesy photo)

Varna Davis (Row 3, third from left) is pictured with the 1931 Harding football team. Davis grew up in Lockhart, a Union Parish community near the Arkansas state line. His granddaughter, Janna, also attended Harding where she met her husband, current Ouachita Christian football coach Steven Fitzhugh. Davis’ great-grandson, Grant Fitzhugh, is now a junior defensive back for the Bisons. Will Fitzhugh, Grant’s brother, continued the family tradition by signing a letter-of-intent to attend Harding on a football scholarship Wednesday morning. (Courtesy photo)

Ouachita Christian is the only school Will Fitzhugh has ever attended, but he should feel quite comfortable in his new surroundings.

A four-year starter for the Eagles, Will Fitzhugh signed a letter-of-intent with Harding University on Wednesday morning. He also received offers from Mississippi College, Arkansas-Monticello and Northeastern (Okla.) State, but Harding was the front-runner all along.

Will Fitzhugh’s ties to the Searcy, Ark. school can be traced back to 1931 when his great-grandfather, Varna Davis, played for the Bisons. Davis’ encased leather college football helmet and a picture of the 1931 team were among the props on display at the signing day ceremony.

Will’s parents, OCS coach Steven Fitzhugh and Janna (Davis’ granddaughter), met at Harding. Upon finishing his playing career, Steven Fitzhugh began his coaching career as a graduate assistant with the Bisons. Will joins his brother Grant, a junior defensive back, on the Harding roster.

Soon to be married, Grant will no longer live on campus, but having an older brother on the team is still an added perk.

“if I need a home-cooked meal, I’m going to tell Grant, ‘Hey, I need to get away from here for a minute,’” Will Fitzhugh joked.

When it came time to choose a college, none of Will’s family members pressured him to sign with Harding. In the end, he followed his heart.

“I’ve been going to Harding games my whole life,” Will Fitzhugh said. “The coaches are really good people. I have already met a lot of the players, and they are some awesome guys. It’s a great environment.”

“Will was probably one year-old when he went to his first Harding football game,” coach Fitzhugh recalled. “Cam Rowan, the quarterback for our 2000 state championship team, was playing for Harding at the time.”

As a senior, Will Fitzhugh was able to celebrate an OCS state championship of his own.  He recently finished his storied career as the school’s all-time leader in all-purpose yardage (7,123 yards) and kickoff return yards, and is among the career leaders in numerous categories.

Now that it is official who he is going to play for, the question is what position is the 5-foot-11, 185-pound Will Fitzhugh going to play. The Harding staff has plenty of options as he was a two-time All-State Class 1A free safety in addition to playing running back, wide receiver and returning kickoffs.

“I’m not sure where I’m going to play yet,” Will Fitzhugh said. “I don’t really care. I just want to play football.”

“It’s going to be different not playing both ways.”

Due to all the family ties involved, Wednesday was a special day for the Fitzhugh family. For Steven Fitzhugh, Will’s signing was a triple blessing as a son and a former player signed with his alma mater.

“Obviously, Harding is a special place to Janna and me,” coach Fitzhugh said. “I’m excited about Will getting the opportunity to play for some of the same coaches I played for, and to play with Grant again. It’s a great program.

“Harding’s a special place, and it’s not just because of football. They strive to live by their mantra, ‘Honor God.’” It’s not just empty words — they live it out.”

Will Fitzhugh has also excelled in the classroom, compiling a 4.0 grade point average.