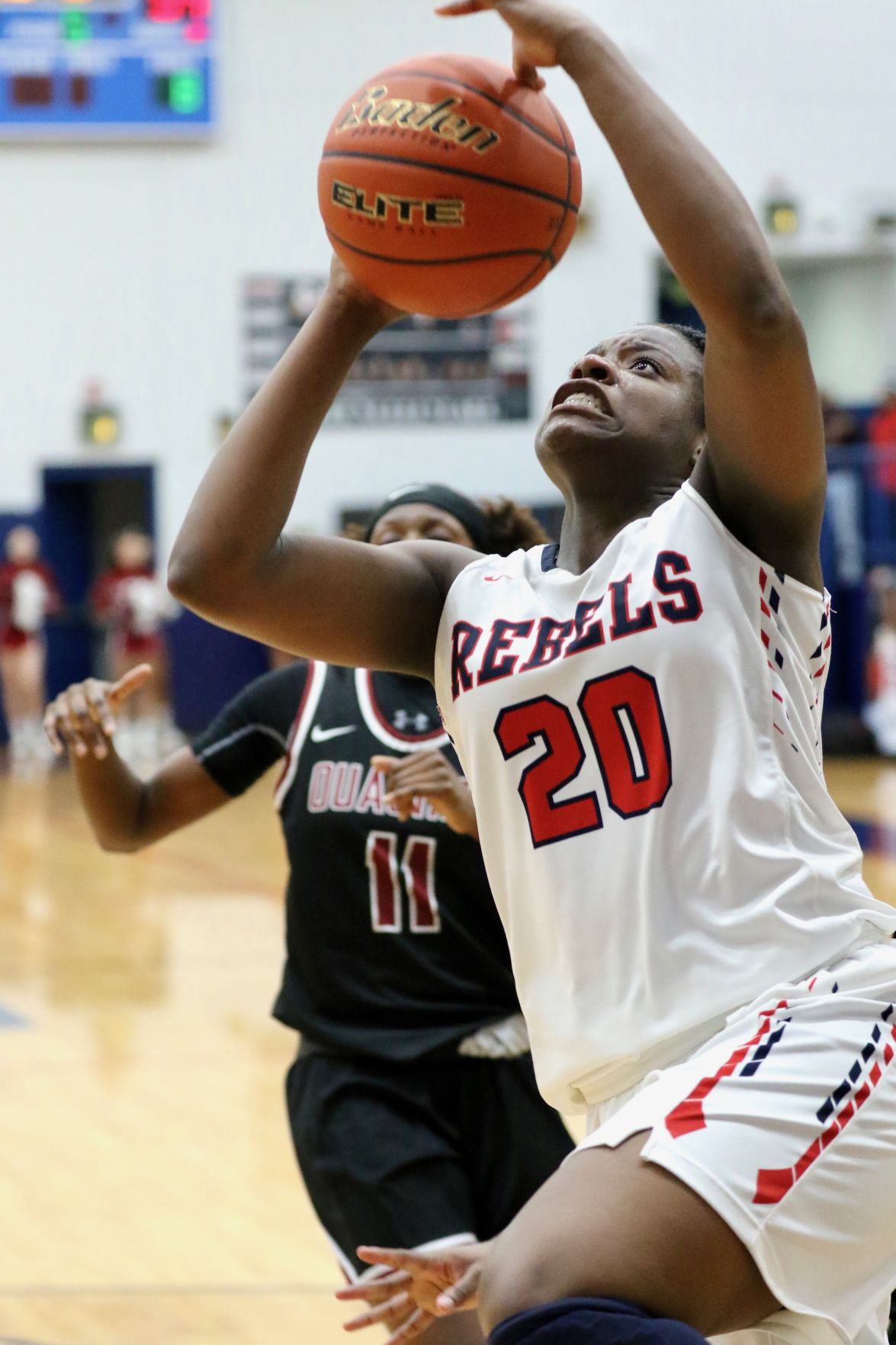 West Monroe's Amaya West made the game-winning bucket in overtime for the Lady Rebels. (Photo by Tom Morris) 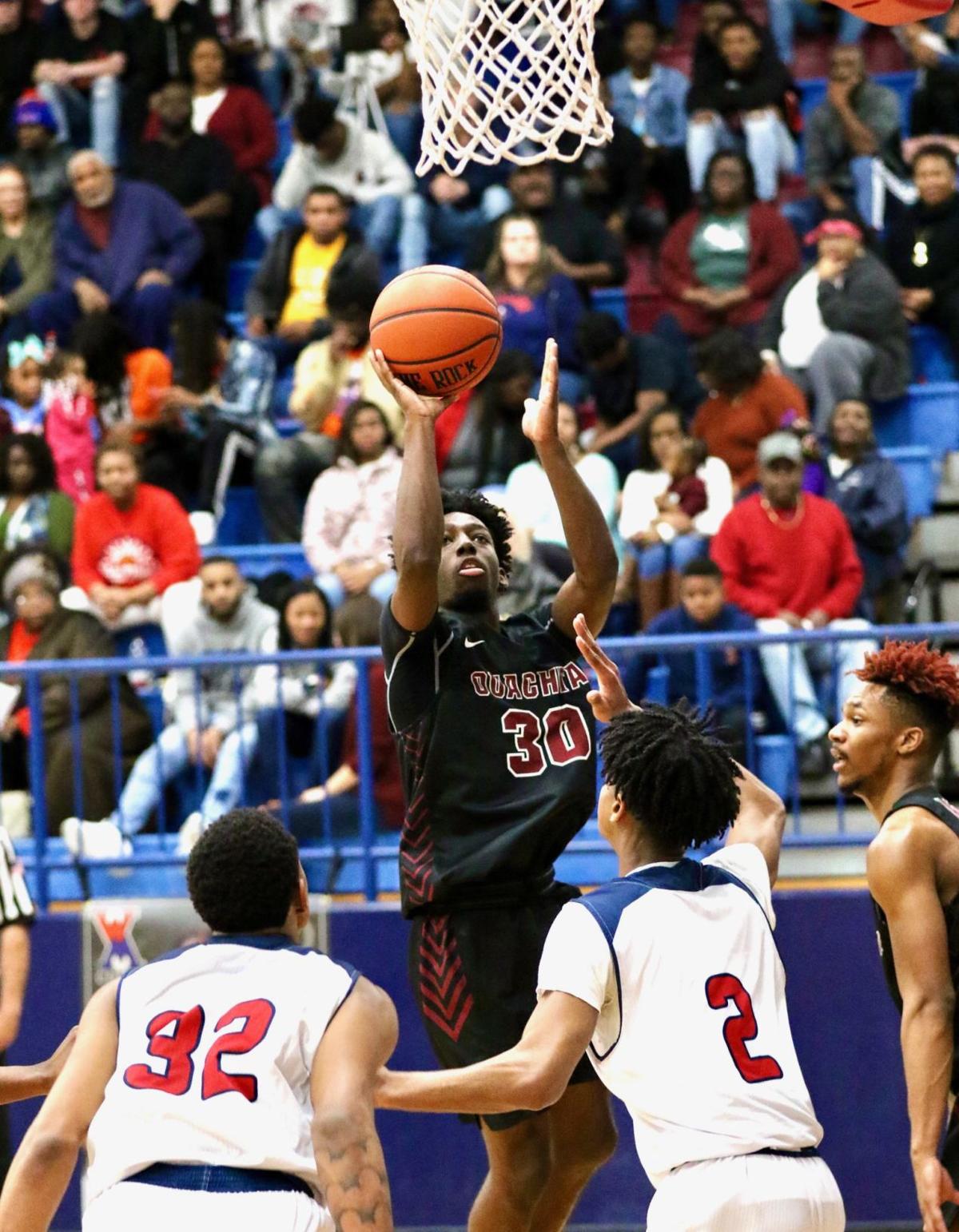 The West Monroe boys basketball team peaked through the doors of their locker room as Faith Robinson flexed in front of a near capacity crowd Friday night for what turned out to be a 56-54 thrilling overtime win for the Lady Rebels.

Robinson, West Monroe’s stud power forward who had just scored seven consecutive points to get her team back into the ball game, took on Ouachita’s top player Lafaedria Green in the paint with precious seconds ticking away. Robinson drew a foul to try and tie the game, 47-47, and send the pivotal district clash into overtime. Before stepping to the line and tying the game, Robinson roared as the crowd drowned her out with their own cheers and stomps from above.

With No. 3 Ouachita’s 16-game win streak in the district hanging in the balance, players and coaches from the boys game to follow had to catch a glimpse of what sent West Monroe’s student section into a frenzy.

The only problem was the game was far from over.

Ouachita’s Faith Lee drew a foul on the other end of the floor with 23.2 seconds remaining in the game. As her teammates went to encourage her, Lee bobbed her head and mouthed, “I got this,” before stepping to the line and knocking down both shots. Down 49-47, West Monroe raced up the court and passed the ball around until it landed in the hands of Amaya West, who drove to the basket and tied the game, 49-49, with eight seconds left.

“It’s just bizarre because I just kept thinking, once we hit the shot to send the game into overtime, it’s déjà vu of us last Friday at Pineville,” West Monroe head coach John Green said.  “We led the whole game. We were up four with 12 seconds left and they hit a couple of shots to send it into overtime, and it was roles reversed tonight.”

Lee opened the extra four minutes with a 3-pointer and Skylar Buie hit a jumper to give the Lady Lions a five-point lead. The Lady Rebels didn’t panic, though.

“We play such a demanding schedule, playing the best teams in the state for this moment,” Green said. “The composure, by now, it would be disappointing if we didn’t have it.”

West Monroe’s Rakyla Russell drained a 3-pointer and Dezarae Stewart tied the game after Makayla Glass recorded a steal and found her open in the lane with 26 seconds remaining.

On West Monroe’s final possession, West got the ball and drove the lane for the game-winning bucket.

After the game, Green called it a complete performance. Robinson put the team on her back when she had to, West made the clutch baskets in the end and guard Precious Robinson went toe-to-toe with Ouachita’s Cambria Hargrave in the third quarter. But the contributions didn’t end there.

“Our red team (scout team) was unbelievable running their plays for us at practice. I told them we wouldn’t have won this game without them,” Green said.

After a slow start by the Lady Lions — West Monroe led 8-4 after the first quarter — Ouachita’s Lafaedria Green anchored a 9-0 run to give the Lady Lions control to start the second. After making two free throws to start the run, Green swatted a shot attempt on the other end before drilling a floater. On the ensuing offensive possession, Skylar Buie beat the Lady Rebels’ full-court press and drained a jumper before hitting a 3-pointer to give Ouachita a 13-8 advantage.

Turnovers and offensive rebounds kept the Lady Rebels within range, though. Shamiyah Butler’s put-back ended the Lady Lions run, but it was West Monroe’s only field goal over a six-plus minute stretch in the second quarter.

Green scored 11 points in the quarter as the Lady Lions took a 23-18 lead into half.

“Ouachita brings a great crowd and our people want to come see us, and it certainly lifts you,” West Monroe head coach John Green said.

For Ouachita, ain’t no party like a 3-point party because a 3-point party doesn’t stop. Thanks to Jamal Davis, it was raining 3-pointers for the Lions in the third quarter as a seven-point lead ballooned to 14. Davis nailed three triples in the quarter alone.

“He’s the engine that gets us going,” Ouachita head coach Jeremy Madison said. “When he’s knocking down shots like that, it gives us a lot of energy, especially on the defensive end.”

A Matt Hayman dunk midway through the fourth quarter allowed the Lions to hold a 47-32 lead, as fans hit the exit and reserves entered for both clubs.

Ouachita improved to 18-4 and 4-0 in district with the victory.

“Moving forward, we have to play these guys again and play ASH, and in the playoffs, we have to excel in these types of environments. I’m happy with the way our guys handled this environment,” Madison said.

After each squad had a feeling out process during the first quarter, Ouachita used an 11-0 run to take a double-digit lead over the Rebels.

James Ross began the run with a put-back and added to it with a steal and layup on the other end. Matt Hayman’s 3-pointer followed by Quez Owens free throws gave Ouachita a 23-12 lead on the road, as West Monroe struggled with turnovers and a scoring drought that spanned most of the quarter.

“The big key was once we got the big defensive stop, we ended it with a rebound,” Madison said. “Defensive rebounding is what we’ve been trying to get better at.”

Jerry Day drained a 3-pointer for the Rebels that simultaneously ended the run and sent West Monroe into halftime down 23-15.