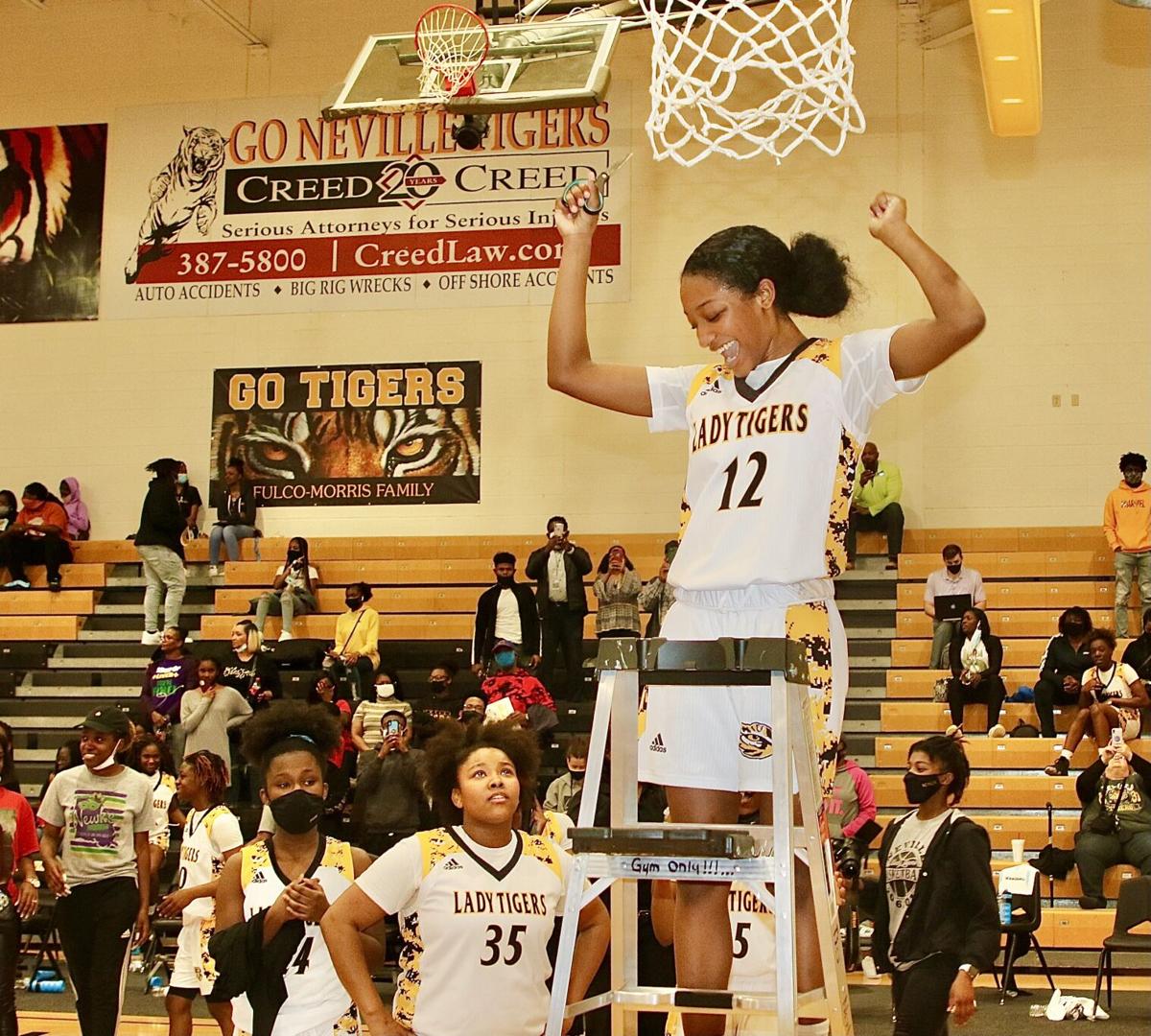 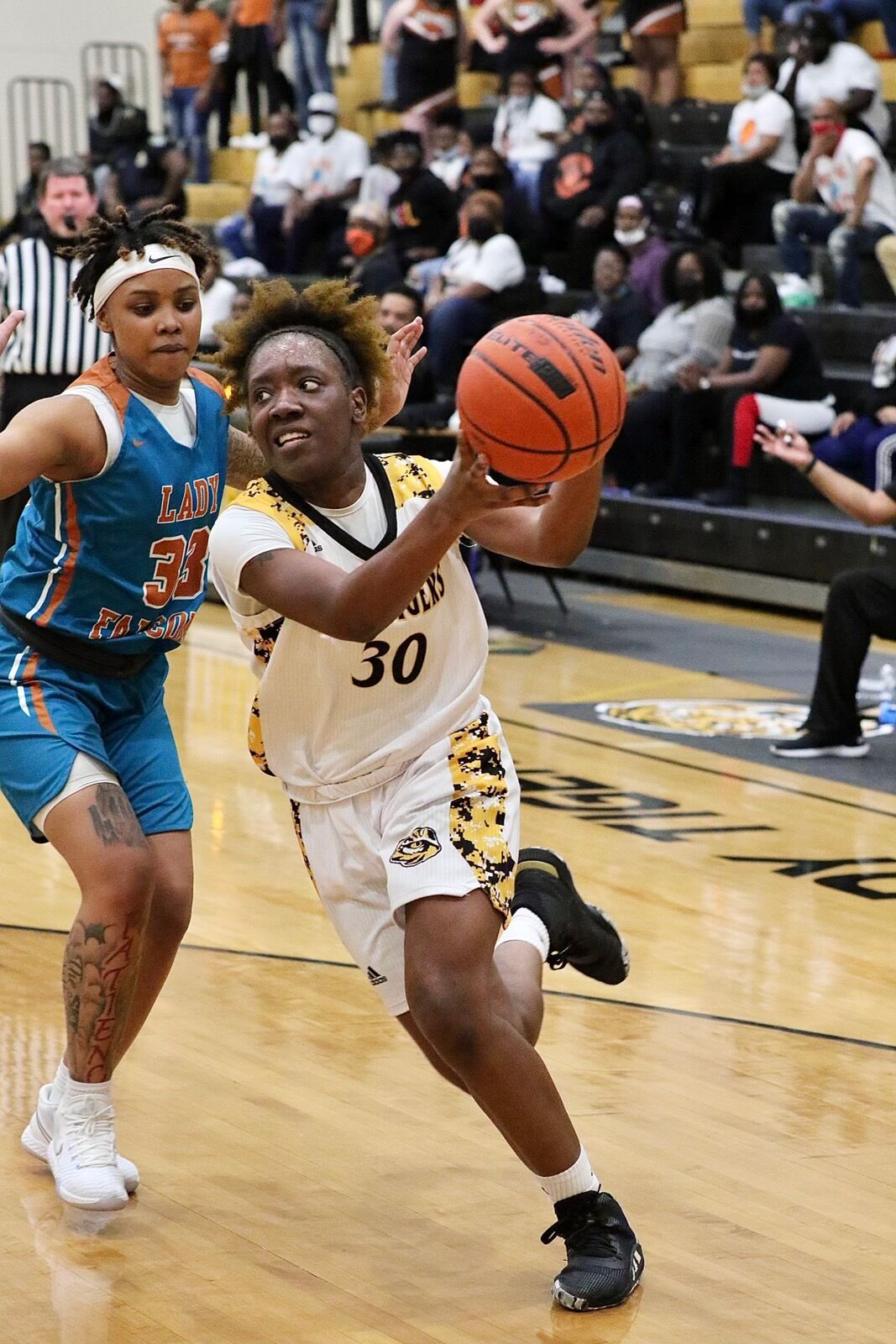 As senior after senior climbed the ladder to cut a piece of the net down following Neville’s 42-37 quarterfinal victory Thursday night, Neville head coach Lorrie Guimbellot swelled with pride. Her Lady Tigers just ripped off their 18th straight victory, and this one sent Neville back to the state tournament.

“I’m just so proud of them,” Guimbellot said. “This is four years where we’ve been to two quarterfinals, a state final and now a chance to get back in it... In the 26 years I’ve been in doing this, I haven’t had a senior group like this.”

No. 3 Neville’s state tournament berth was in jeopardy during a back-and-forth matchup with No. 11 Northwood (Shreveport) Thursday night.

The (22-2) Lady Tigers fell behind 37-36 with three minutes remaining in the home playoff contest, but thanks to some key assists by veteran guard Jajuana “JoJo” Briggs, the Lady Tigers closed the game on a 6-0 run to punch their ticket to the state tournament.

“(Briggs) hates to not be on the floor,” Neville head coach Lorrie Guimbellot said. “She got those fouls early, and I think that got to her knowing this would be her last game here. She can’t stand to not be in the game. That’s how she's been ever since she was a freshman. There’s no stopping her. She doesn’t realize that she just has raw ability to get after it.”

After a scoreless first half, Briggs scored seven straight points in the third quarter. When the Lady Tigers went down by one late in the fourth, Briggs sliced through the lane and found a wide-open Dakayla Howard at the 3-point line, who in turn knocked down the trey to put the Lady Tigers back on top for good.

“I just panicked a little bit in the first half, but I calmed down and came back out ready,” Briggs said.

That much can be said for all of the Lady Tigers. After a first half that was full of turnovers and uncharacteristic plays made by a team that’s won 22 of 24 games this season, Guimbellot’s message was simple at halftime: settle down.

The Lady Tigers certainly did so in the second half and the defense limited Northwood to a near nine-minute field goal drought in the final two quarters.

Neville’s defense is what brought the Lady Tigers to the dance with a 17-game win streak, and early on, it showed. Neville forced two turnovers within the opening two minutes of the contest, but make no mistake about it — field goals were elusive for both squads early on.

The first quarter can be summed up in two categories for Neville: turnovers and second-chance points. Though Neville struggled from the field, its defense made up for it on the other end with steals that would often lead to missed shots or turnovers on the other end. From the bench, the Lady Tigers coaching staff was extremely vocal about taking care of the basketball better.

“We were out of character in the first half,” Guimbellot said. “We weren’t playing ball like we play ball. We were making mistakes that we hadn’t made all year.”

Neville’s saving grace in the first half was the offensive boards that led to several Mia Hardin field goals underneath the basket. Two of Neville’s four field goals in the first quarter came off of second-chance opportunities.

Briggs and Howard scored nine points apiece in the win, while Hardin led the team with 10 points in the victory.

Neville will face the winner of No. 7 Plaquemine and No. 2 Huntington in the semifinals next week.