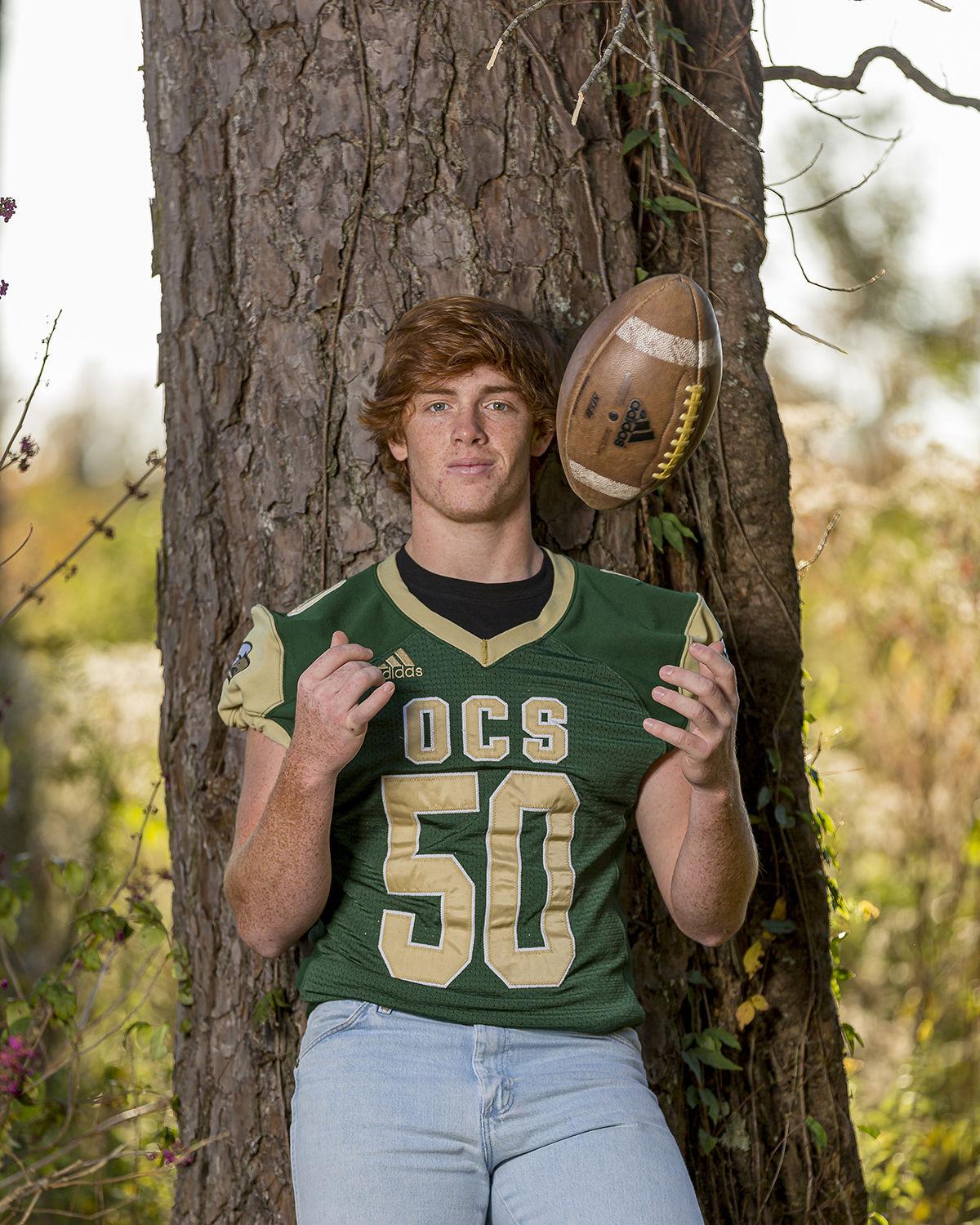 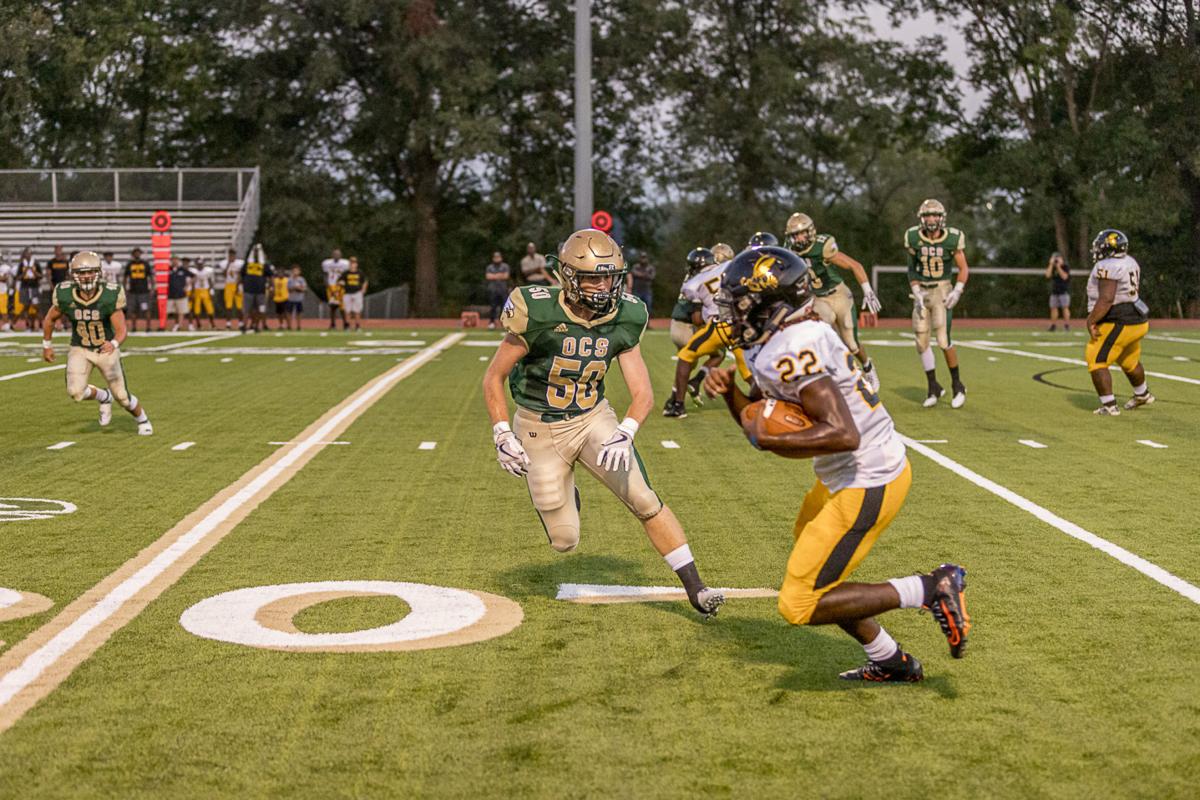 Ethan Hogan (50) has a team-high 84 tackles for the OCS Eagles. (Photo by Brad Sanson/Sprig Designs)

Ethan Hogan (50) has a team-high 84 tackles for the OCS Eagles. (Photo by Brad Sanson/Sprig Designs)

Now a senior, the 5-foot-10, 195-pound linebacker has been a driving force in the Eagles’ 2109 playoff quest. Ouachita Christian (12-1) will play Catholic-Pointe Coupee (11-2) Friday at noon in the Division IV state championship game at the Mercedes-Benz Louisiana Superdome.

“I’ve seen all those teams go to the ’Dome,” Hogan recalled. “Playing in the ’Dome is something I have always wanted to do. Getting to play there my senior year is a dream come true. To see it happen is kind of overwhelming, I guess you could say.”

Hogan and classmates Walker Morris, Jon Thomas Dixon, Will Fitzhugh, Grant Mashaw and Blake Pender have been together since first grade.

“We have gone to school together since first grade, and we all started playing football as soon as we could,” Fitzhugh said. “We’re all brothers.”

Ethan has a biological brother on the team, as well, in freshman wide receiver/defensive back Brock Hogan.

“I’ve been playing with Broc all my life in the front yard. Getting to play together on the football field is special,” Hogan said. “He has a lot of potential. I would say he’s a lot more athletic than I was as a freshman. He has a great mentality. He puts in the work. I’m excited about seeing what he does. I’m looking forward to following him throughout his career.”

Hogan’s dream of finishing his career in the Superdome was almost derailed. Over the summer, the select schools voted to pull out of the Superdome Classic and reaffirmed their stance during a second vote in September.

OCS and Catholic-Pointe Coupee were among the schools that voted to keep the championship games in the Superdome. In a letter to LHSAA Executive Director Eddie Bonine within days after the final vote, coach Steven Fitzhugh requested that the Eagles be allowed to host the game in the ’Dome, provided they reach the championship game as the higher seed. As it turned out, OCS met both criteria.

On Monday, the LHSAA agreed to allow the Division IV schools to join the non-select schools in the Superdome Classic.

Had the request been denied, OCS would have hosted the championship game on Friday, Dec. 6. While playing at home would not have been the worst-case scenario, the ’Dome was clearly Hogan’s preferred venue.

“Every football player in the state grows up dreaming of playing in the ’Dome,” Hogan said. “I tried to stay positive through it all. But with everything that was going on, and only one head coach in the state fighting to play in the ’Dome, I didn’t believe it was going to happen. I’m extremely thankful for the way it turned out.”

For the Eagles and Hornets, the change in venue effectively created a bye week.

“I think it helps us tremendously because we get to rest and heal up,” Hogan said of the extra week. “It also gives us a chance to analyze their offense, get acclimated to what they do, and be prepared.”

After facing two explosive passing attacks against Calvary Baptist and Metairie Park Country Day, the Eagles must now gear up for Catholic’s flexbone.

“We have to shift back to our run defense, but we’re going to be ready for them,” Hogan said. “They hardly ever pass, but you have to respect it.”

“They have a lot of two-way starters,” Hogan said. “We’re known for that, too. We have people who rise up and do what has to be done. They are a hard-nosed football team.”

A fixture in the Eagles’ starting lineup for the past three seasons, Hogan’s 275 career tackles rank 10th on the school’s all-time list. In the process, he has gained the trust of the coaching staff.

“Ethan understands our defense,” OCS coach Steven Fitzhugh said. “He is our vocal leader on the field. He recognizes what the offense is doing, and communicates the things he sees to us as coaches so we can make adjustments.”

When the OCS defense is on the field, follow No. 50, and you will usually find the ball.

Besides topping the team’s tackle chart with 84 stops, he has 12 tackles for negative yardage and seven sacks. Hogan’s highlight reel moment came on a 54-yard pick-6 vs. Delta Charter in the regular season finale.

As a junior, he was in on a team-high 103 tackles, with 11 tackles for loss and two sacks.

Exceeding expectations as a sophomore, Hogan was credited with 75 tackles, including five stops in the backfield.

“Ethan really grew up his sophomore year,” coach Fitzhugh said. “His freshman year, he did a good job on the scout team. We didn’t expect him to have a breakout year as a sophomore, but he took on a big responsibility and did a very good job for us at linebacker. He has continued to get better every year.”

Hogan and the Eagles paid a price to get to where they are now. All of the summer workouts and sacrifice now seem worthwhile.

“The fact that we came up here and put in all those hours has prepared us for this moment,” said Hogan, who made 39 of the team’s 40 summer workouts. “We have given everything we have to get to the state championship game, which makes me appreciate this opportunity even more.”

Only one more hurdle remains for Hogan’s career to have a perfect ending.