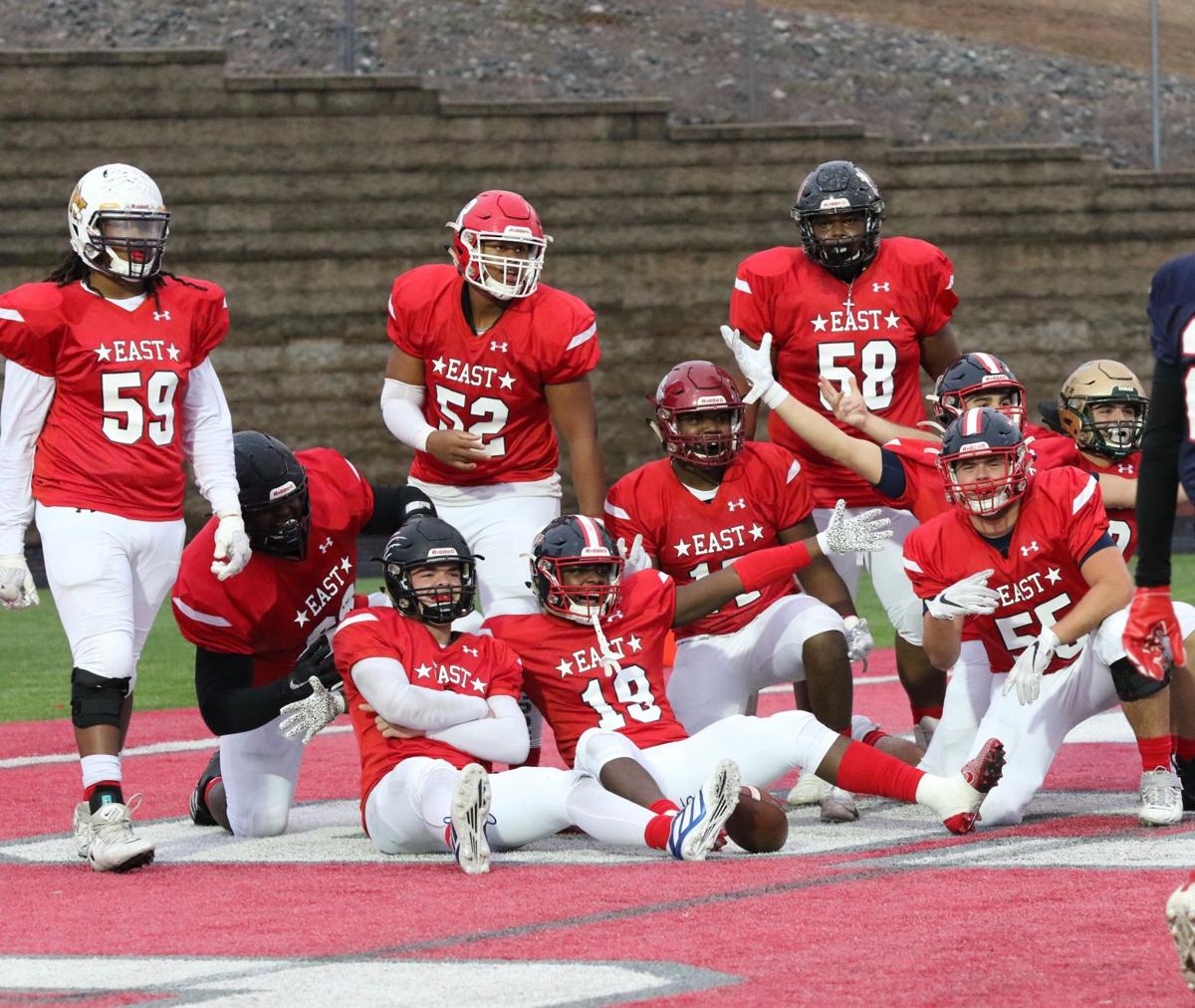 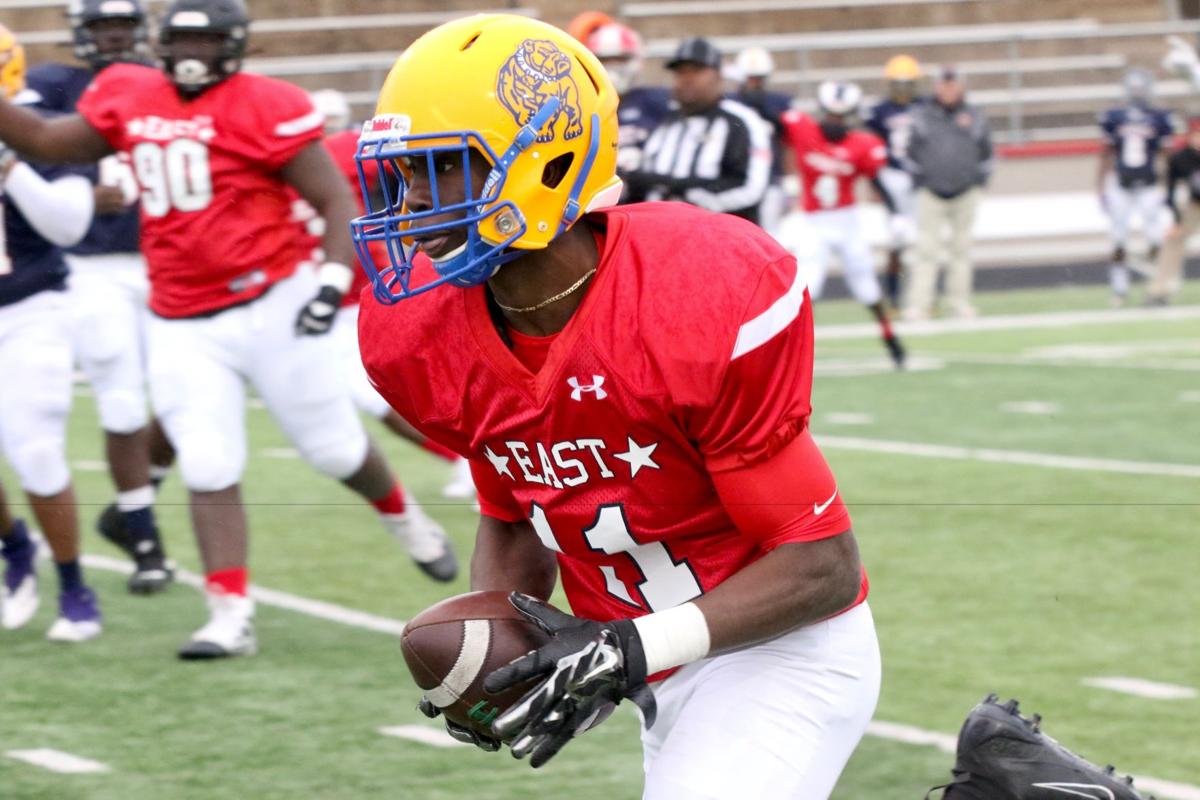 Cedric Woods picked off the first play of the game and returned it for a touchdown in I-20 Bowl.

The fourth I-20 Bowl held at Ruston High School drew elite participation from schools across Northeast Louisiana, so it didn’t shock anyone on the East sidelines to see a 42-21 victory in the All-Star matchup against Northwest Louisiana.

Only one East player that was invited to play in the 2019 I-20 Bowl turned down the opportunity, which really was a bigger win than any for East head coach Steven Fitzhugh.

“I think it’s getting out there more and more that this really is a special week,” Fitzhugh said. “Northeast Louisiana has a lot of great talent, and we want to be intentional in getting our best talent to play in this game.”

One player that didn’t decline the invitation was Ruston quarterback Jaden Procell, who would play for the final time at Ruston High School. Procell, one of the smallest players on the roster, made the biggest plays when it mattered most.

After the East raced out of the gates to a 21-0 lead, the West struggled to pick up a yard, much less a first down. But then the game changed in the third quarter.

As the momentum shifted to the West sidelines, the East All-Stars were searching for answers in the third quarter. That’s when Procell entered the game for his third series. The West All-Stars scored 14 unanswered points, which reduced the East’s lead to 21-14.

Procell had the hot hand after connecting with district rival Jerry Day (West Monroe) for a long score earlier in the game. But that was when the West All-Stars were searching for answers, though. And this time, it was the East looking for a spark. Procell bought time in the pocket before finding Ruston teammate Cam Crowe for a 74-yard touchdown, extending the East All-Stars’ lead to 28-14.

“It’s quite a way to go out,” Procell said. “It’s amazing because I’ve been throwing to him all year. I’m just glad that was my last throw.”

Procell was named MVP after completing 7-of-8 passes for 191 yards and two scores.

Local coaches stated throughout the week that it wasn’t too difficult to spot which players on the roster are Division-I bound. West quarterback Cade Hart out of Calvary likely agrees. Four days after signing with Louisiana Tech, Carroll corner Cedric Woods picked off Hart on the very first play of the game and returned it 20 yards for the East score.

“I’ve enjoyed coaching Cedric this week, and just watching him in practice you know he has a great future,” Fitzhugh said. “All of these guys did a great job. We only had three days of practice. These kids came out and executed.”

After an ensuing three-and-out, the East opened the game in a triple-option based attack, which quarterback Hayes Crockett and H-back Cayden Pierce are more than familiar with. Like Sterlington and West Monroe, the East All-Stars grinded away a 12-play, 50-yard drive that culminated with Pierce rumbling in from three yards out to give the East a 14-0 advantage. Pierce rushed for 40 yards and had 39 receiving yards in the contest.

The West turned to quarterback Luke Bogan out of Northwood on the following possession, but on his first play from scrimmage, he ran into an unblocked Kenean Caldwell out of Oak Grove. The 6’3” 320-pound defensive tackle dropped Bogan for a nine-yard loss before two incomplete passes set up yet another punting situation for the West. The West All-Stars had negative yardage to end the first quarter.

The East All-Stars attempted a reverse on the first play of the ensuing series, but the ball was mishandled and Natchitoches’ John Waskom recovered the loose football at the East’s 22-yard line. The West All-Stars didn’t gain a single yard after securing the turnover. On third down, Ouachita linebacker Carl Glass showcased his versatility by suffocating a West receiver that ran a corner route in the end zone.

The East opened it up with the spread on their next possession. Procell took to the sky and completed two straight passes before eventually connecting with West Monroe receiver Day on a 44-yard touchdown pass, allowing the East to improve its lead to 21-0.

The West All-Stars showed signs of life on the ensuing series and picked up positive yardage and a first down for the first time all day. Hart made four straight completions including, a 10-yard touchdown pass. Hart scrambled and noticed a wide-open Roc Hawthorne (North Webster) in the back of the end zone to give the West its first points of the day.

The East and West All-Stars exchanged punts back and forth as the defense ruled the majority of the third quarter. The West got the spark it needed midway through third when Woods muffed a punt, which set the West All-Stars up at the 30-yard line. Bossier’s Decamerion Richardson, a Mississippi State signee, made good on the field position by breaking through the middle of the line and cutting to his left at the second level for a 30-yard score, reducing the East’s lead to just seven.

After the Ruston duo connected to give the East All-Stars a two-touchdown lead again, Wossman pass rusher Jacoby Collins dropped Hart in the backfield for a 14-yard loss on a sack. Collins added another sack to his total on the ensuing series, as he constantly wreaked havoc in the West backfield. The negative play set up a deep pass on the sideline, which Ouachita Christian’s Will Fitzhugh corralled for an interception.

“That one just fell right in my lap,” Will Fitzhugh said.

The East put the game away immediately after. Procell took to the air twice for big gains before Crockett finished the drive off with a three-yard rush.

Glass picked off a pass late to set up the East digging into their bag of tricks. Pierce took a pitch and stepped back to pass before hitting Ruston’s Marcus Harris for a 36-yard touchdown pass.

“It’s been awesome to meet new guys that you heard of but never met,” Will Fitzhugh said. “We built a camaraderie in just a week.”

The Louisiana Football All-Star game began in the 1980s with its games being played at Tiger Stadium in Baton Rouge. From 2003 to 2012, one team was selected for the state of Louisiana to challenge Baytown-Houston area’s All-Stars.

In 2013, the Louisiana Football Coaches Association decided to move the game to Independence Stadium in Shreveport one week after the Superdome Classic.

In 2016, the LFCA decided to split the game into regional all-star games throughout the state. The East All-Stars has defeated the West in the I-20 Bowl at Ruston High in 2016 and 2018. The East leads with a 3-1 record.