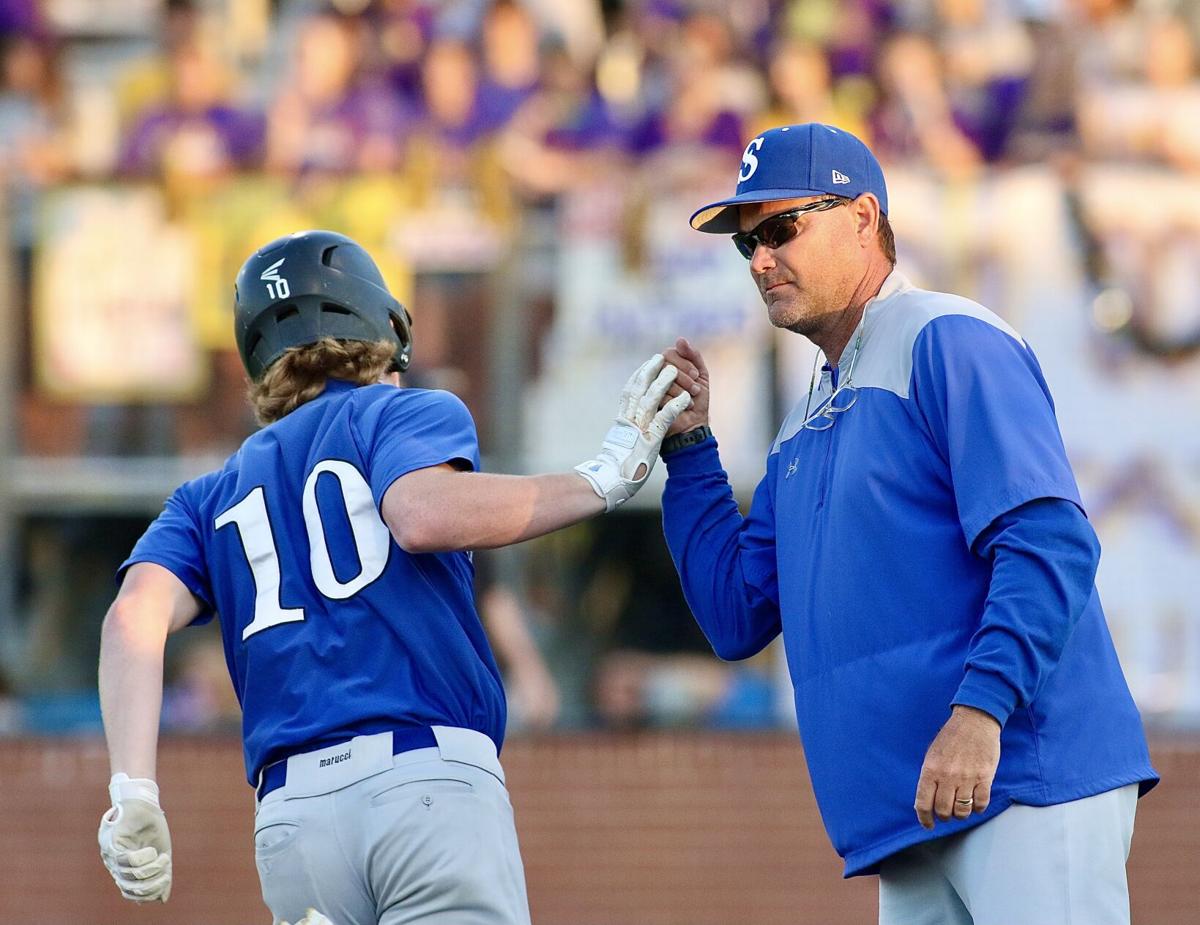 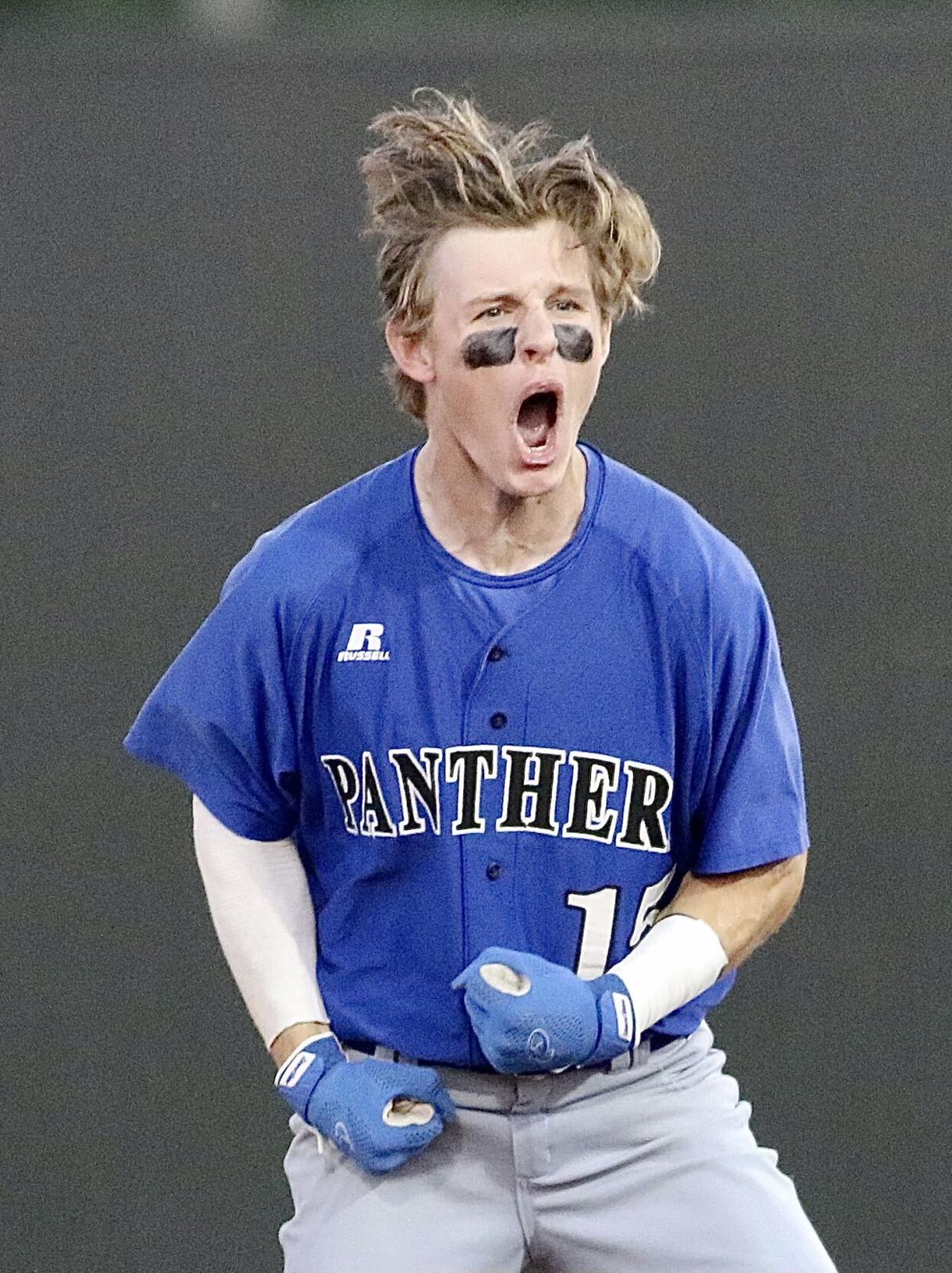 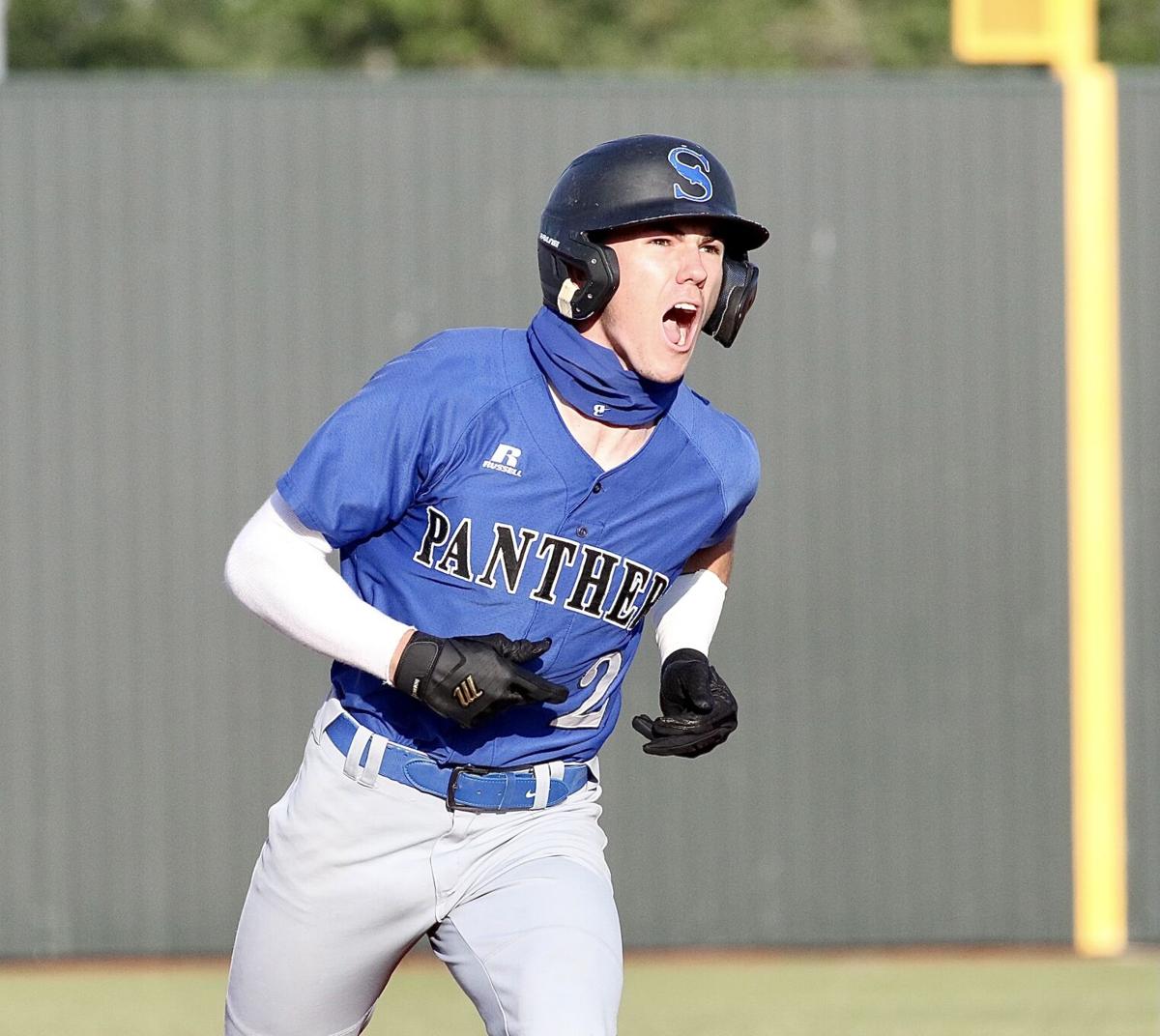 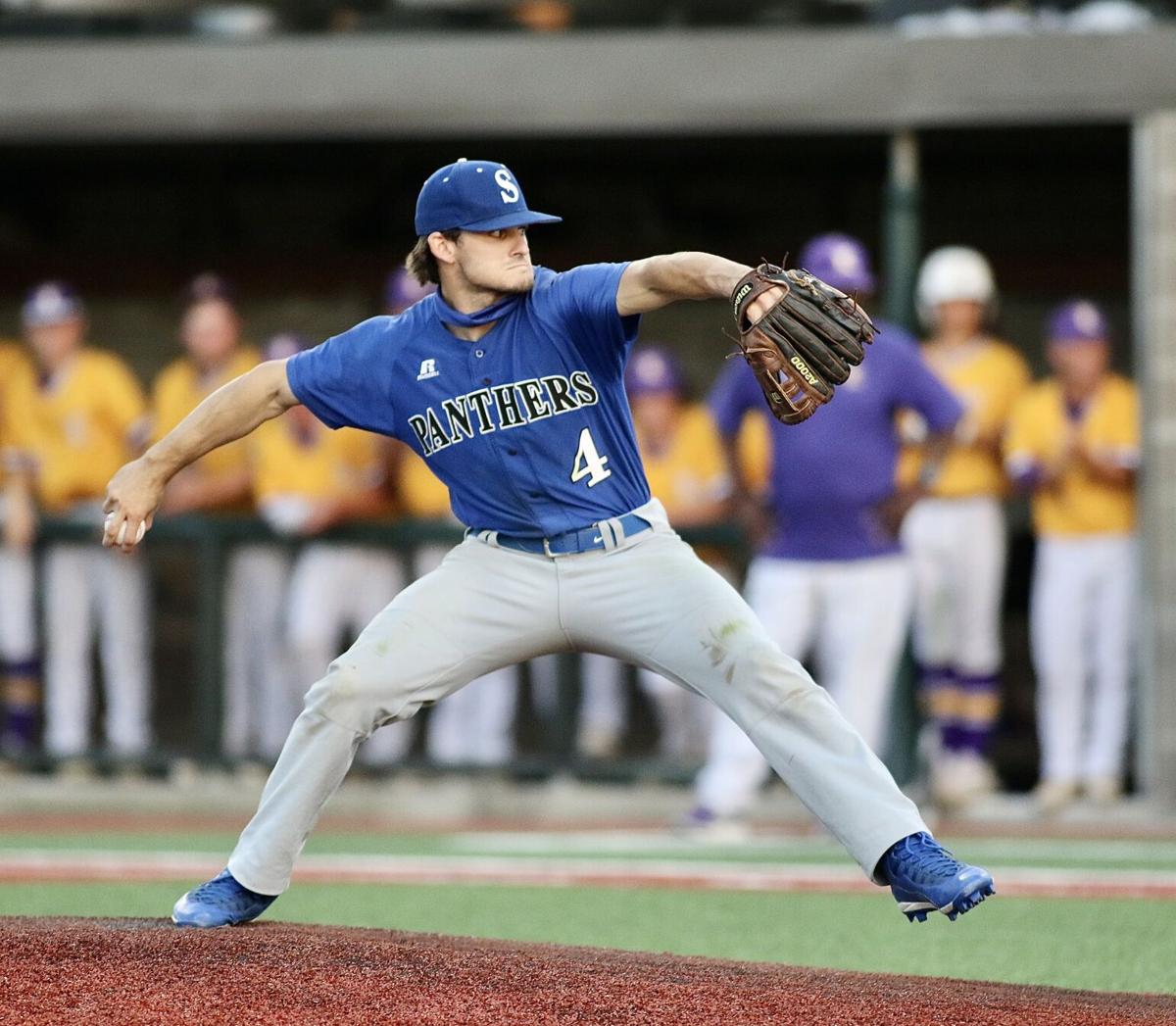 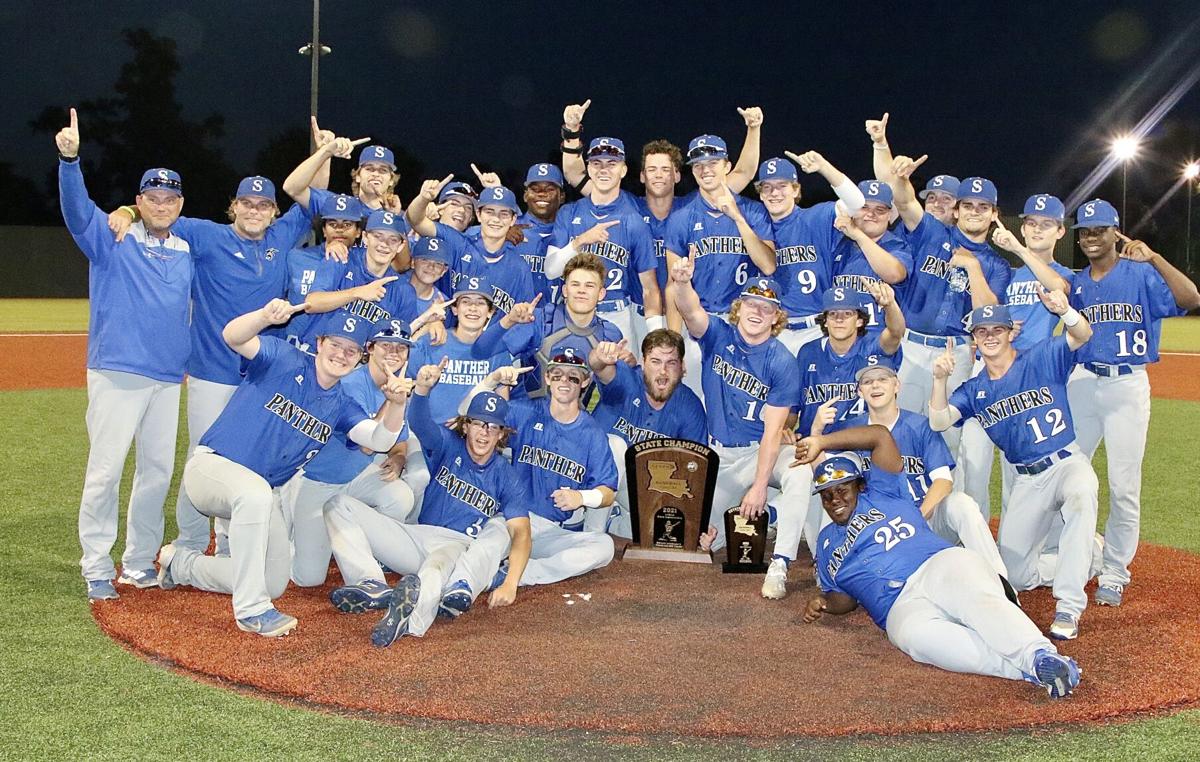 “There’s nothing like doing this with your son on the team… Oh man, there’s something special about that,” said Sims, as tears filled his eyes.

The feeling is pretty special for sons Sterling Sims and Seaver Sheets too. After going 2-for-4 with a double in the state championship victory, Auburn signee Seaver Sheets found his father, Ben, after the win.

“Just seeing him after the dog pile. I was so excited, but he was probably more excited than I was,” Seaver Sheets said. “That was awesome just because we’ve worked hard together for so long.”

Seaver Sheets and Sterling Sims weren’t the only players that made Mark Sims, Ben Sheets and the entire Sterlington Panther family proud Friday night. There’s plenty of love to share after an 8-4 victory against Lutcher for the school’s third state championship in baseball.

Sterlington totaled 13 hits and used four different arms to secure a back-and-forth battle with Lutcher. Sterlington right fielder Parker Coley earned Most Outstanding Player honors for his 3-for-4 day that included a solo home run in the fifth inning. With tears in his eyes, Coley celebrated the win with his teammates, knowing good and well the flag had been planted in Class 3A with back-to-back state championships for Sterlington.

“This is the best feeling in the world,” Coley said. “I think for years to come we are the team to beat in 3A.”

Mason Lawhon got the start for the Panthers, and ran into trouble in the very first inning. Garrett Gil and Kyle St. Pierre started the game off with singles for Lutcher. Carter Poche recorded an RBI single and Cohen Veron followed with an RBI double. A wild pitch scored the third run of the game.

Clay Benson hit a ground rule double with two outs, and Coley followed with an RBI single to put the Panthers on the board.

Lawhon’s day ended in the second inning when Lutcher loaded runners at the corners with a double and a single with one out. Luke Handy relieved Lawhon. Handy got a nice assist out of the inning from his right fielder, as Coley charged a hard hit shot, made the catch and threw it over to first for the double play.

Trailing 3-1, Grant Mangrum led off the second with a single. That set the table for Cole Thompson, who delivered a 2-run homer to tie the game, 3-3. That was Thompson’s third home run and 14th RBI of the postseason.

In the third, Handy ran into a jam. The Bulldogs loaded the bases, and Mark Sims wasted no time making the switch to Benson with two outs. Coley secured a flyout in right to leave the bases juiced.

Benson settled in for the Panthers, striking out two batters in a 1-2-3 inning for Sterlington in the fourth.

“Clay Benson, to me, came in and threw all those zeroes up there after that,” Mark Sims said. “He sort of ran out of gas. He doesn’t pitch much, but Ben kept telling us, ‘William (Perkins) can do this.”

Before Perkins entered to pitch, he was making an impact at the plate. The ULM signee delivered the two-out RBI single to give the Panthers their first lead of the ballgame. That hit ended Josh Oubre’s day, as he allowed five earned runs on six hits and one walk. After Oubre's exit, Seaver Sheets knocked in Sterling Sims as the Panthers scored five unanswered.

An errant throw on a potential inning-ending double play in the fifth allowed the Bulldogs to score a run, drawing within one.

The Panthers created a little breathing room in the bottom half of the fifth with Coley’s solo blast. That allowed Sterlington to take a 6-4 advantage into the sixth inning.

Perkins entered as the Panthers fourth pitcher of the game in the sixth and struck out the side. Perkins touched 88 m.p.h. on the radar gun.

In the bottom of the sixth, Seaver Sheets’ RBI double added an insurance run for the Panthers. Coley followed with another RBI single to extend the Panthers lead to 8-4.

After the game Ben Sheets gave credit to Mark Sims for continuing to believe in his players after frustrations that resulted from Sterlington’s top two pitchers (Seaver Sheets and Nick Whittington) combined to pitch just one inning all season long.

“Coach had some ups and downs with some of the kids, and we just kept saying, ‘This ain’t what we’re playing for. We’re playing for the final prize,’” Ben Sheets said. “At times he was getting ticked off, but he kept them right in the lineup. And they came through.”

Mashaw recognized by Beyond the Badge

Georgiann Potts: ‘My humanity is bound up in yours, for we can only be human together’

Writer’s Note: Recently I was doing some research and ran across several references to “June… Read more