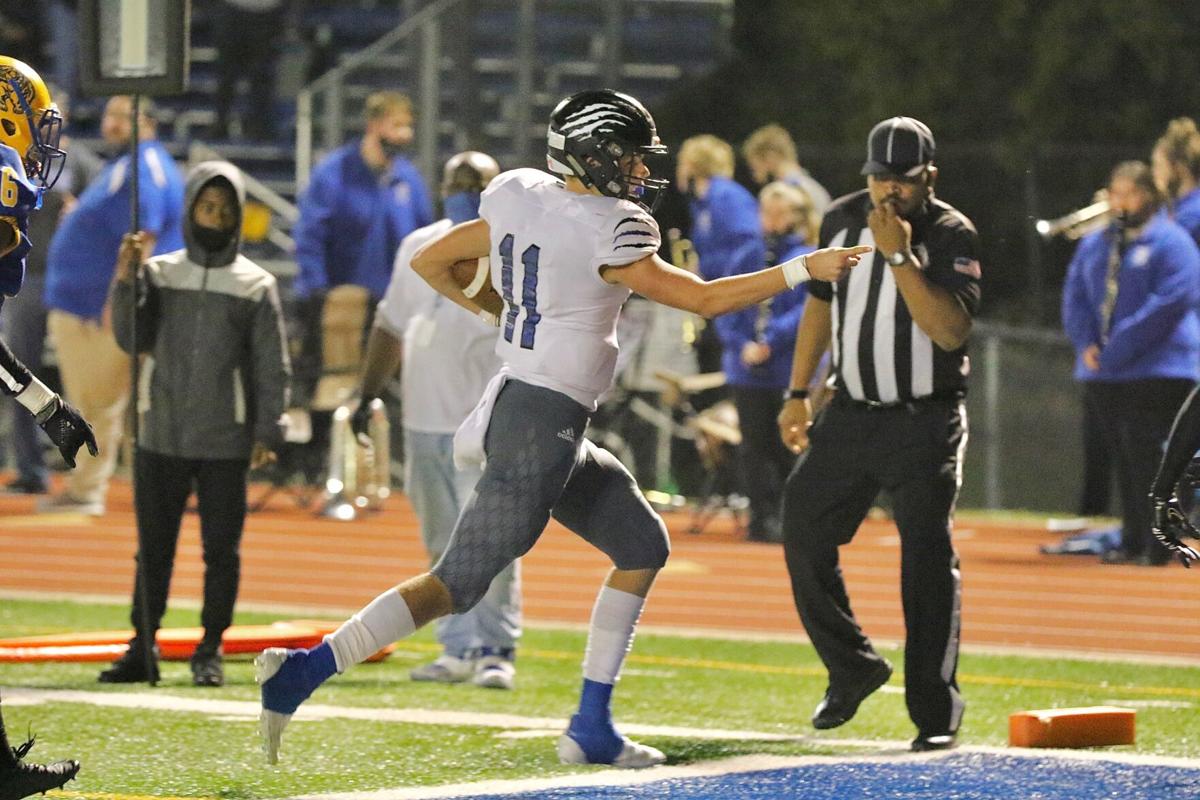 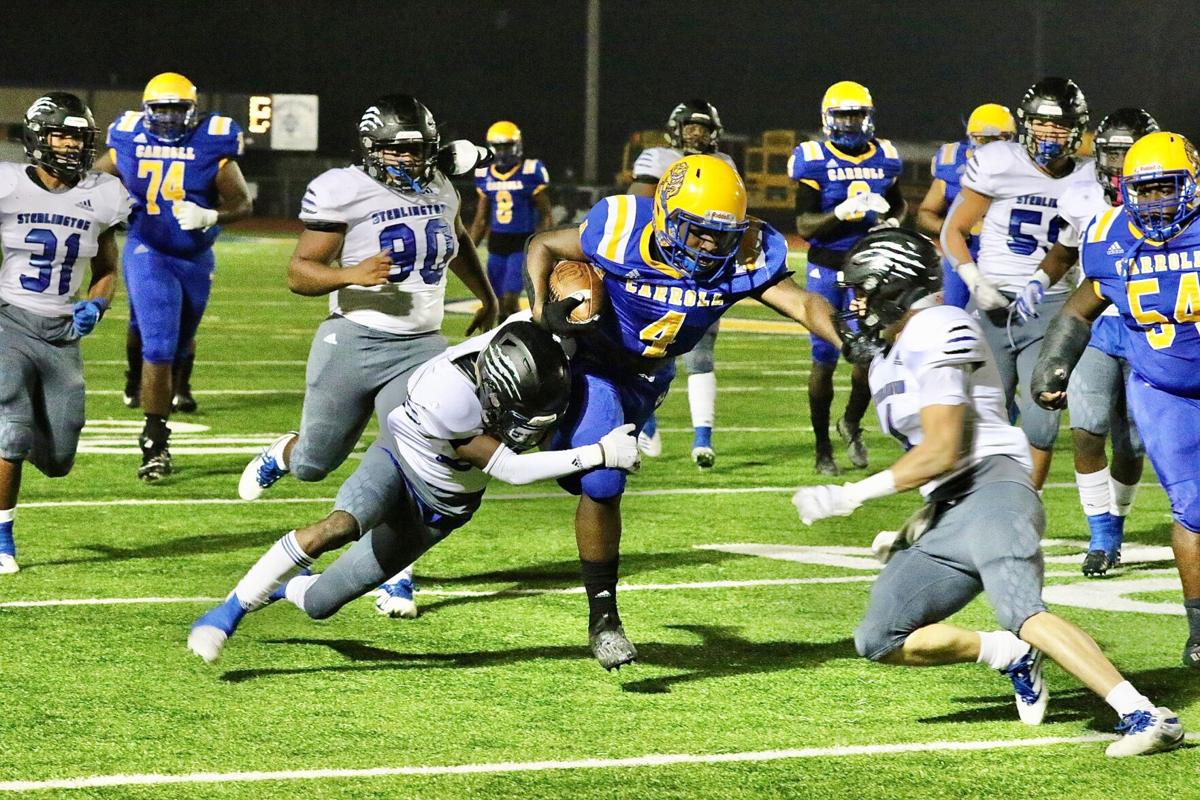 Carroll running back Amareya Greeley rushed for more than 100 yards in the first half against the Panthers in a loss. (Photo by Tom Morris)

A slow start, a 30-minute halftime and a third-quarter collapse encapsulated a wild, yet memorable, Sterlington/Carroll encounter Friday night.

After falling behind 13-0 in the first half, Sterlington rallied to beat the Carroll Bulldogs, 27-13.

The Panthers went into the half down 13-3, thanks to a couple fumbles that Carroll pounced on, but as Carroll was late starting its homecoming festivities, halftime expanded longer than 30 minutes.

And Sterlington came out of the gates with a renewed focus. The Panthers raised their level of intensity and forced a 3-and-out to begin the half, which preceeded two consecutive scoring drives of their own and a safety. The Panthers answered the challenge from head coach Lee Doty and scored 27 unanswered points to beat the C-Dogs.

“I told ‘em we were fixing to go with freshman,” said Doty on what he told his players at halftime. “I told them all along that if we see any bad body language, you’re coming out and we’re putting freshmen in. I don’t know, man. Our kids, we have a good football team. We just can’t wait to play second half football. I think a lot of it had to do with the layoff, but I also think the long half hurt them a little bit too.”

Carroll head coach Tank Washington wasn’t making any excuses after the loss, though. He gave Sterlington all the credit for the victory.

“(The long halftime) probably did hurt us, but at the end of the day, we have to come out and play and we had a bad second half,” Washington said.

After that initial 3-and-out to start the second quarter, Sterlington ripped off an 11-play scoring drive that ended in a 3-yard score by fullback Zach Crain. Crain was the workhorse for the Panthers, as he ran the ball 31 times for 130 yards in the victory. Sterlington rushed for 313 yards as a team in the victory.

Leading 13-10 now, a holding penalty backed the Bulldogs up on their second possession of the half, which led to an eventual blocked punt by the Panthers. Luke Handy jumped on the ball for the Panthers to set up a 6-yard score from Crain. Quarterback Grant Mangrum, who also serves as the holder, threw the 2-point conversion to Cameron Rivera to give the Panthers an 18-13 lead in the third quarter. A bad snap two plays into the ensuing possession led to a safety, as Sterlington’s lead expanded to 20-13.

“I don’t think we ran no more than 15 plays in the second half,” Washington said.

Carroll actually ran just over 20 plays in the second half, as Sterlington dominated the time of possession with its ball-control offense. Crain scored the final touchdown of the game in the fourth from one yard out.

Before things went sideways on Carroll, it actually looked pretty good for the Bulldogs on homecoming night.

If Ouachita Parish football fans don’t know the name Amareya Greeley by now, Carroll’s sophomore running back did everything he could in the first half to introduce himself to the area.

Carroll’s offense ran through Greeley early and often, as the talented speedster broke tackles en route to accumulating 104 yards on the ground in the first two quarters, which included a 4-yard score in the first quarter. He also had a 38-yard reception in the half, as Carroll gave Sterlington’s defense that is fresh out of quarantine a heavy helping of its electric backfield.

Chalk it up to rust if you’re a Panther fan, but Sterlington simply struggled to hold onto the football in the first half. Sterlington fumbled the ball four times in the first two quarters and lost the football on two of them. Carroll’s defense was active throughout the night, as senior defensive lineman Dalion Caesar and junior defensive back Kendrick Carter pounced on loose balls for the C-Dogs.

Sterlington’s defense had a turnover in the first 24 minutes too, as junior free safety Cliff Jones picked off Carroll quarterback Antonio Hollins. Jones’ interception came after Sterlington fumbled at the mesh point on its own 20-yard line in the first quarter. Carroll elected to take a shot and Sterlington took advantage with a pick in the end zone.

The Bulldogs then turned to its run game with Greeley late in the quarter before punching it in with Greeley on that short-yardage score.

Carroll called upon its passing game in the second quarter as Hollins connected with four different receivers for 72 yards. Hollins punched it in himself on a quarterback sneak from one yard out to give Carroll a 13-0 advantage.

“I think we played a great first half, and we came out the second half and things just didn’t go our way,” Washington said. “Their system overcame ours tonight.”

Sterlington made a change at halfback by moving fullback Crain to halfback and bringing Romaji Hatfield into the game as the new fullback. The move helped produce Sterlington’s most productive drive of the half, as the Panthers marched 73 yards before having to settle for a 27-yard field goal from Jacob Green.

Sterlington got the ball to Carroll’s 6-yard line before another fumble was recovered at the 10 and forced Sterlington to call its final timeout of the half. The Panthers took a shot at the end zone on third down before electing to kick it and go into the half down, 13-3.

The game turned in Sterlington’s favor in the second half, but Doty knows Carroll isn’t a pushover for anyone.

“We just started playing like we’re supposed to play,” Doty said. “All respect in the world for Carroll and their coaching staff tonight. They have a good team. Somebody is going to catch those suckers in the first round and be in trouble.”

Playoff pairings for the Class 3A bracket will be announced Sunday.

EDITORIAL: Thanksgiving a time to reflect, give thanks

In the 2020 election, the far left failed miserably. At the presidential level, Donald Trump… Read more