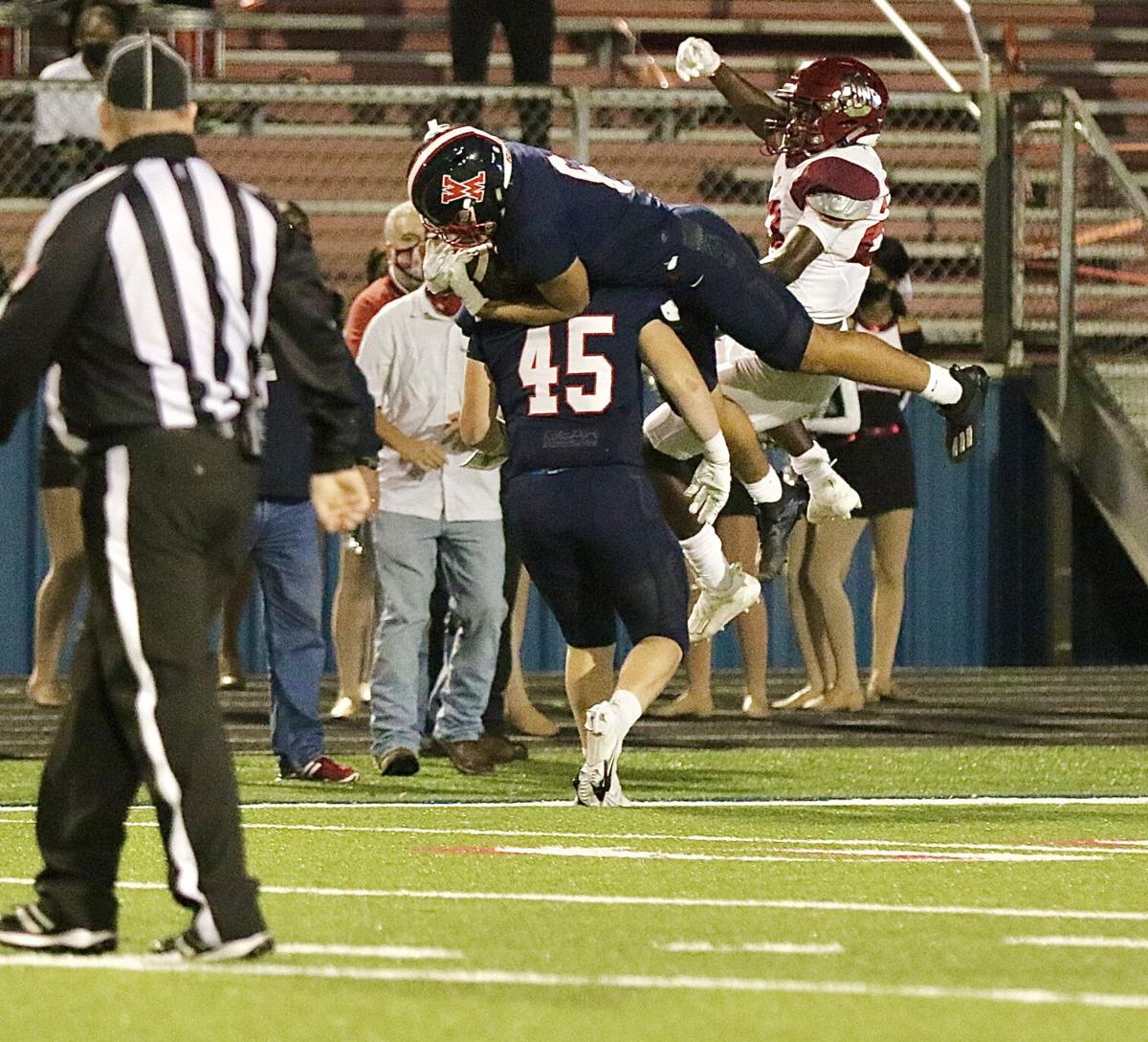 West Monroe's Paul Manning made an acrobatic interception near the sidelines in the Rebels' 23-14 victory Friday night. (Photo by Tom Morris) 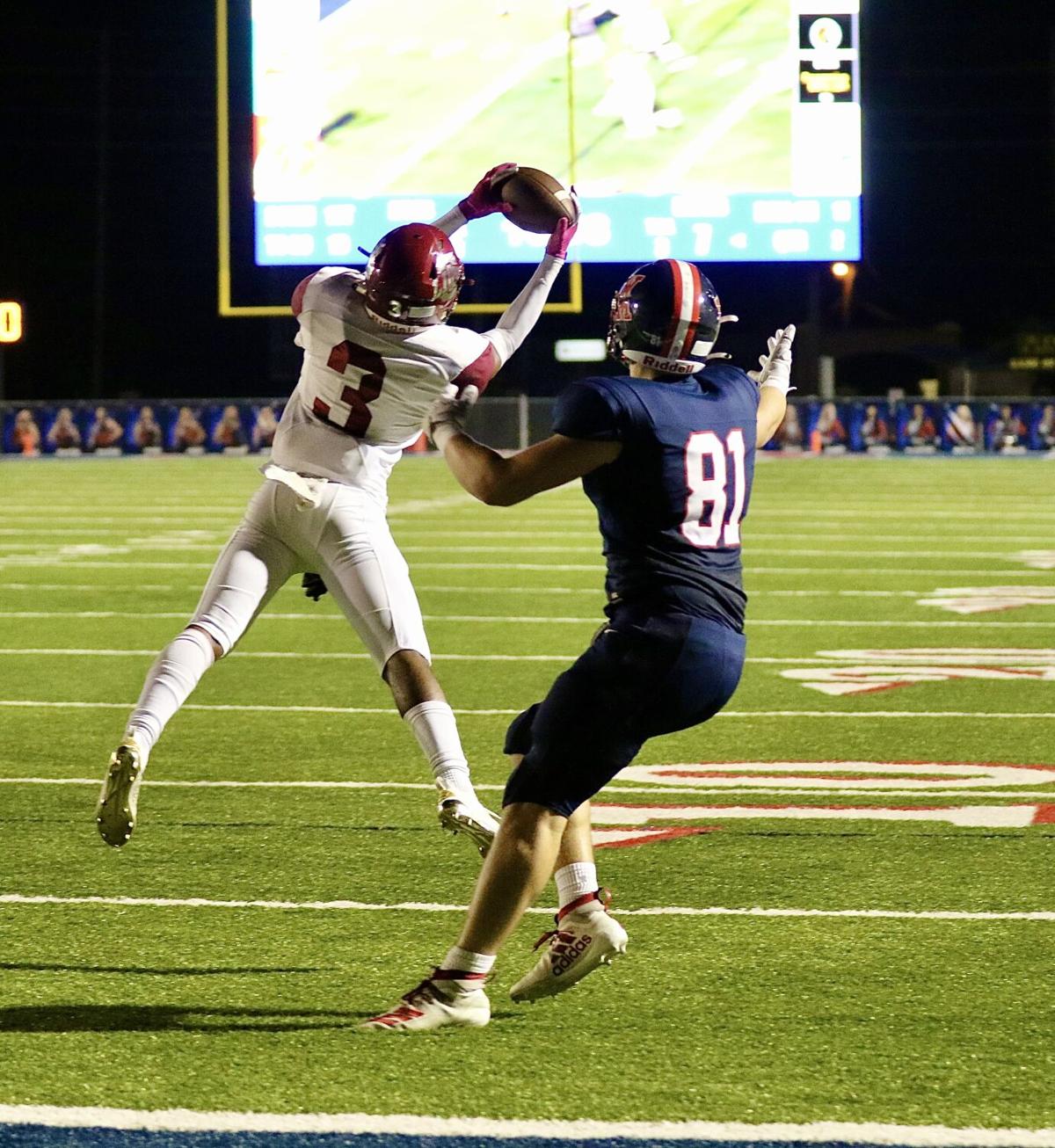 Ouachita's Jaylen Kincaid makes an interception and returns it 95 yards for the score against West Monroe. (Photo by Tom Morris)

The (4-1) West Monroe Rebels extended its win streak over Ouachita to 27 straight with a 23-14 victory over the Lions Friday night.

“It’s very special to a guy that never really wanted to be a head coach,” Arledge said. “I was an assistant coach in high school for six years. I was in college for 19 as an assistant coach at Louisiana Tech and Northwestern, and then I came here and Don (Shows)  and I hooked up.  He gave me an awful lot of freedom. I could talk him out of any football player. All I had to tell him was, ‘Hey, if you want to win a state championship, you give me Adam McConathy, Brian West or Bradie James on defense.’

The Rebels entered the matchup still feeling the effects of COVID-19 from two weeks ago. Because certain players were still quarantining, the Rebels had four first-time starters on the offensive line, along with key pieces missing in the secondary.

“It felt good to get a quality win because Ouachita is a good football team in my mind,” West Monroe defensive coordinator Tony Osborne said. “Not to take anything away from them, but to not be at full strength, and to see our guys play as hard as they did. It’s good to see that because now we have guys who are pushing the players in front of them for starting spots. It’s kind of like (LSU's T.J.) Finley weeks ago who played really good. You have to do that every week, though.”

Two explosive plays, including a 59-yard pass from quarterback Lane Little to running back Noah Norman, were erased by West Monroe penalties on the Rebels’ drive. However, on 3rd-and-9, Little completed a 14-yard pass to running back Derome Williams to continue the drive. Because the Rebels were missing starting offensive linemen, West Monroe’s offensive staff made sure to put Little in rollout situations early.

“Me and Coach (Joey) Adams were talking this weekend, if we don’t start throwing the football, we’re going to be a second or third-round team like we were the year before,” West Monroe offensive coordinator Glenn Hunt said.

Williams ran the ball six times for 30 yards on the Rebels opening drive.

Ouachita’s Cayle Wheeler made an impact early. His tackle for loss on second down set up a 3rd-and-long situation. But the Lions struggled to get off the field. A 15-yard pop pass to Matthew McAlister set up a 1-yard rush from Little, as the Rebels took a 7-0 lead six minutes into the ballgame.

The Rebs followed that opening score up with a 3-and-out on the ensuing possession. The Lions tried West Monroe’s interior defense with three consecutive drives up the middle but defensive linemen Ty Titus and Aiden Bellot made sure all Ouachita could muster were minimum gains.

Ouachita’s defense was up for a similar challenge. While Little was 4-for-4 for 48 passing yards in the first quarter, the Lions had success early on building a wall up front. Senior Eric Pleasant led that effort, as he recorded a third-down stop on the ensuing possession to force West Monroe’s first punt of the game. The Lions could do nothing with the stop, though, as Brock Harvey recorded a sack on third down that gave the ball back to the Rebels to start the second quarter.

As West Monroe looked to have all the momentum — Little completed a 39-yard pass to Noah Norman to put the Rebels at the 11 — one pivotal play gave Ouachita new life. Junior Jaylen Kincaid picked off the West Monroe senior’s next attempt and returned it 95 yards for the score, tying the game, 7-7.

The defenses continued to make big plays throughout the remainder of the half. The Rebels went for it on 4th-and-8 at the Lions 24 with a stretch run play with Williams, however, it was stopped short of the first down sticks. The following possession featured some first down runs from Ouachita’s Boris Richard, but West Monroe senior defensive lineman Sirrlarius Reed came up with a sack on third down to force another Ouachita punt.

The Rebels went back to work on the ensuing drive. Little continued to look Rylan Green’s way, as his senior tight end’s third reception inched the Rebels closer to field goal range. Luke Stagg made the most of the opportunity with a 36-yard field goal that gave West Monroe a 10-7 lead.

That three-point lead got a little less comfortable for the Rebels, as Ouachita benefitted from an explosive Marcell Henderson run and defensive passing interference to get near the Rebels 32-yard line with one minute remaining in the half. On 3rd-and-4, quarterback Zach Shaw got the matchup he wanted as Henderson ran a wheel route against a bulky West Monroe linebacker. But as Shaw let the ball loose, junior Paul Manning ran across from his safety spot, leapt into the air and corralled the interception while balancing himself on linebacker Tag Banks’ shoulders. Manning’s feet came down in-bounds as he balanced himself on the sideline to kill the Lions’ drive.

“Paul was actually in man on the tight end, and Tag was man on the running back,” Osborne said. “They tried to get the back down the sideline, and the tight end stayed and blocked. And Paul isn’t supposed to just cover grass. So he went and played the ball beautifully. It was an athletic play.”

Ouachita had just 27 yards in the first half, but the Lions went into the half trailing by three.

West Monroe’s defense continued to limit Ouachita’s offense at the start of the third quarter, and after a 35-yard punt return from McAlister, the Rebels drove 38 yards to score their second touchdown of the night.

On an option keeper, Little was hit around the 3-yard line but he, along with his blockers behind him, kept driving all the way into the end zone. After the point after was blocked, the Rebels clung to a 16-7 lead.

Shaw completed his first pass of the game midway through the third quarter. His second completion flipped the field. On 3rd-and-15, Shaw lofted a perfect pass to Austin Willis down the sideline for a 44-yard gain. Shaw followed that pass up with another shot to Jacolby Conner that put the Lions at the 3. Boris Richard polished off the drive with a dive that reduced the Rebels’ lead to two late in the third quarter.

As momentum shifted sidelines, the Rebels looked to their defense to regain it. A Ty Allen sack on second down followed by a Brock Harvey tackle for loss set up a Ouachita punt deep in the Lions’ own territory.

Physicality was the name of the game in the fourth quarter, as the Rebels leaned on its familiar veer attack. As the Rebels faced a 3rd-and-long scenario, Williams ripped off a 20-yard gain, where he broke several Lion tackles on the play. Williams ran with an attitude Friday night, as he led all with 112 yards on 19 carries.

“It’s just the rivalry of the schools,” Williams said. “We didn’t get to play last week, so we knew Ouachita was going to try and beat us in our house.”

Little certainly noticed the hard runs that Williams had throughout the night.

“He was getting after it,” Little said. “After some of those big runs, I was in the backfield with Derome saying, ‘Hey, we need this every play. This is awesome.’ Every game, Derome just brings the effort and energy. He’s just such a good back.”

Little ultimately put the Rebels back in the end zone on another option keeper. Little scored all three touchdowns for the Rebels in the victory, and completed 8-of-9 passes for 103 yards.

“Tonight I thought other than that one play in the end zone, (the passing game) was pretty good,” Little said. “The more you do it, the better you get at it.”

On the flip side, Ouachita’s Shaw completed just 6-of-22 passes for 111 yards in the loss. Richard led the Lions with 62 rushing yards on 14 carries.

Up next for the Rebels is a home matchup against a Pineville team that beat West Ouachita, 32-14, in Week 6. As for the (1-4) Lions, Ouachita is looking for an opponent after Alexandria Senior High had to quarantine for two weeks.

WM is not as big or has big name players this year but they play smart and with grit. They will hit you in the mouth time and time again. They impress me as a well coached team that will take any team on.

Homeland Bank is holding its third annual coat and blanket drive to help those in need this season. Read more

The West Monroe Rebels aren’t typically eying a No. 10 seed in the LHSAA playoffs, but this … Read more

The No. 4 Neville Tigers have a date set with No. 29 Peabody in the opening round of the Cla… Read more

Smith sentenced for role in scheme to defraud investors

The LHSAA released its playoff brackets for the 2020 football season Sunday morning, which i… Read more

Maybe New Orleans isn’t a viable championship destination in 2020 after all. Read more

OCS jumps up Division IV rankings with 5A win

Some schools may schedule a 5A school for nothing more than power point implications. That’s… Read more

A slow start, a 30-minute halftime and a third-quarter collapse encapsulated a wild, yet mem… Read more

The St. Frederick Warriors defense got back to its stingy ways in a 40-0 shutout victory Thu… Read more

The River Oaks Mustangs finished the 2020 regular season on a high note, as Nick Parrino and… Read more

LDWF offers prizes for ‘2020 Get Out and Fish’ event

LDWF Offers Prizes for Tagged Fish During the 2020 Get Out and Fish! Derby (November 21-29) Read more

Sterlington trio sign to play baseball at next level

High expectations come with the territory when you sign up to play Sterlington baseball. Tha… Read more