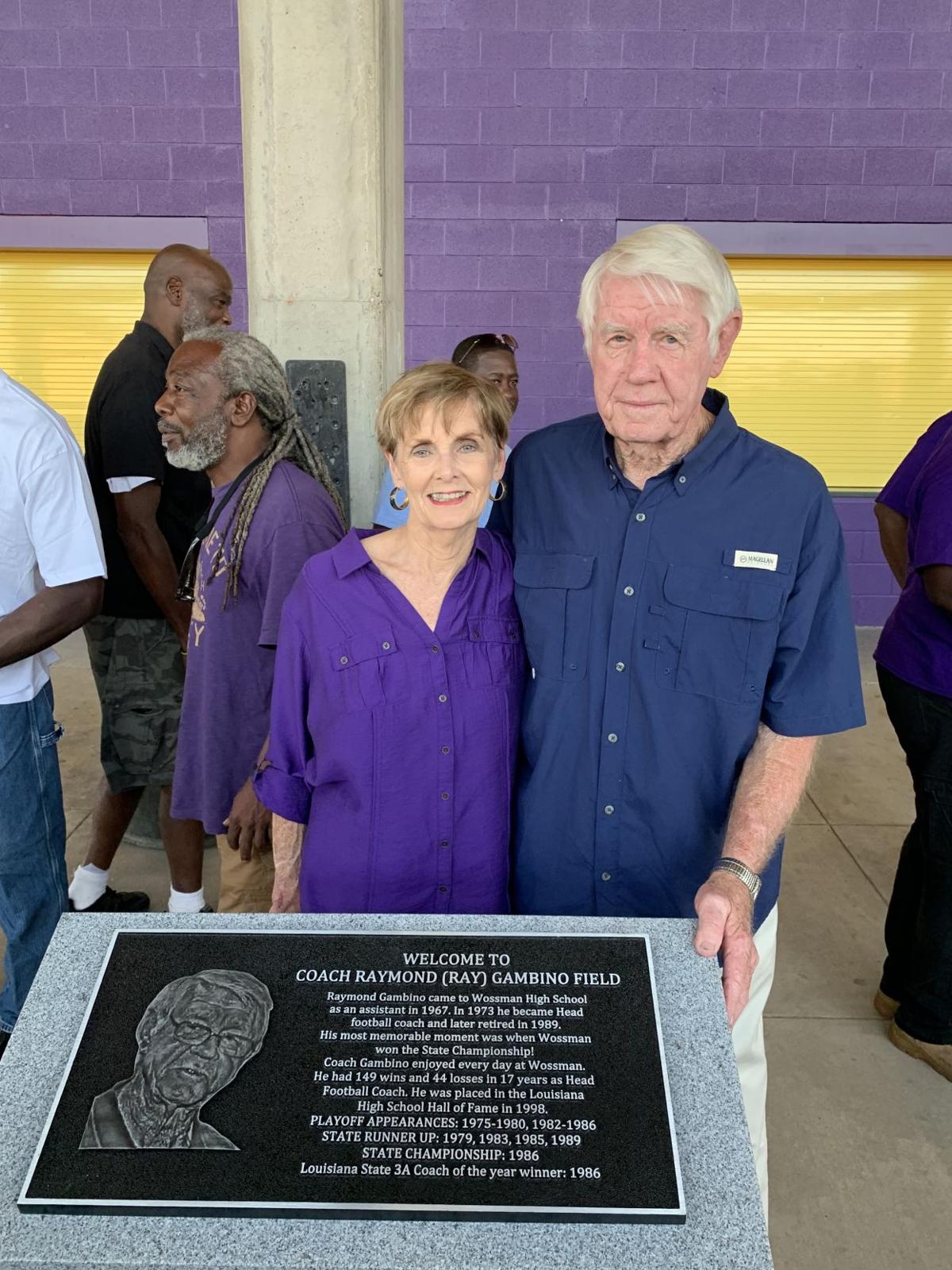 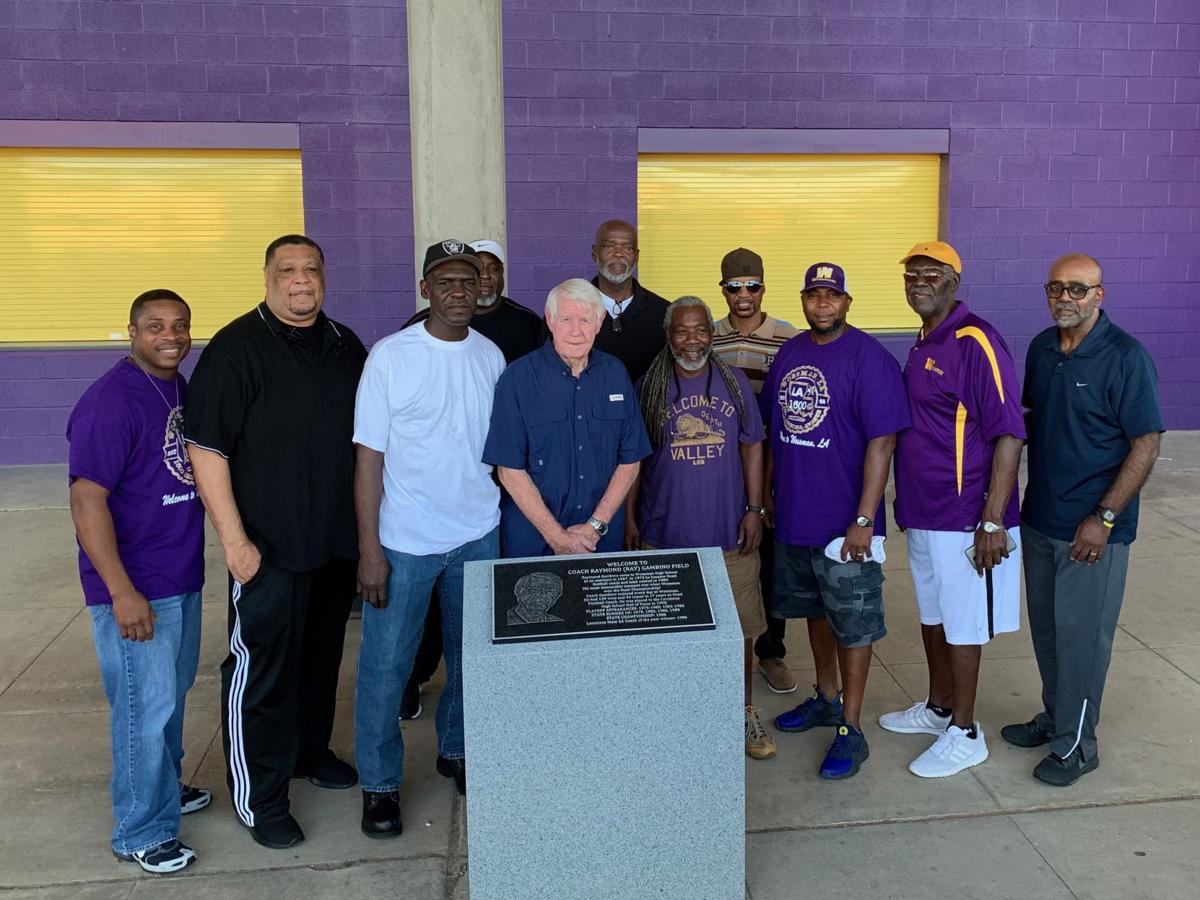 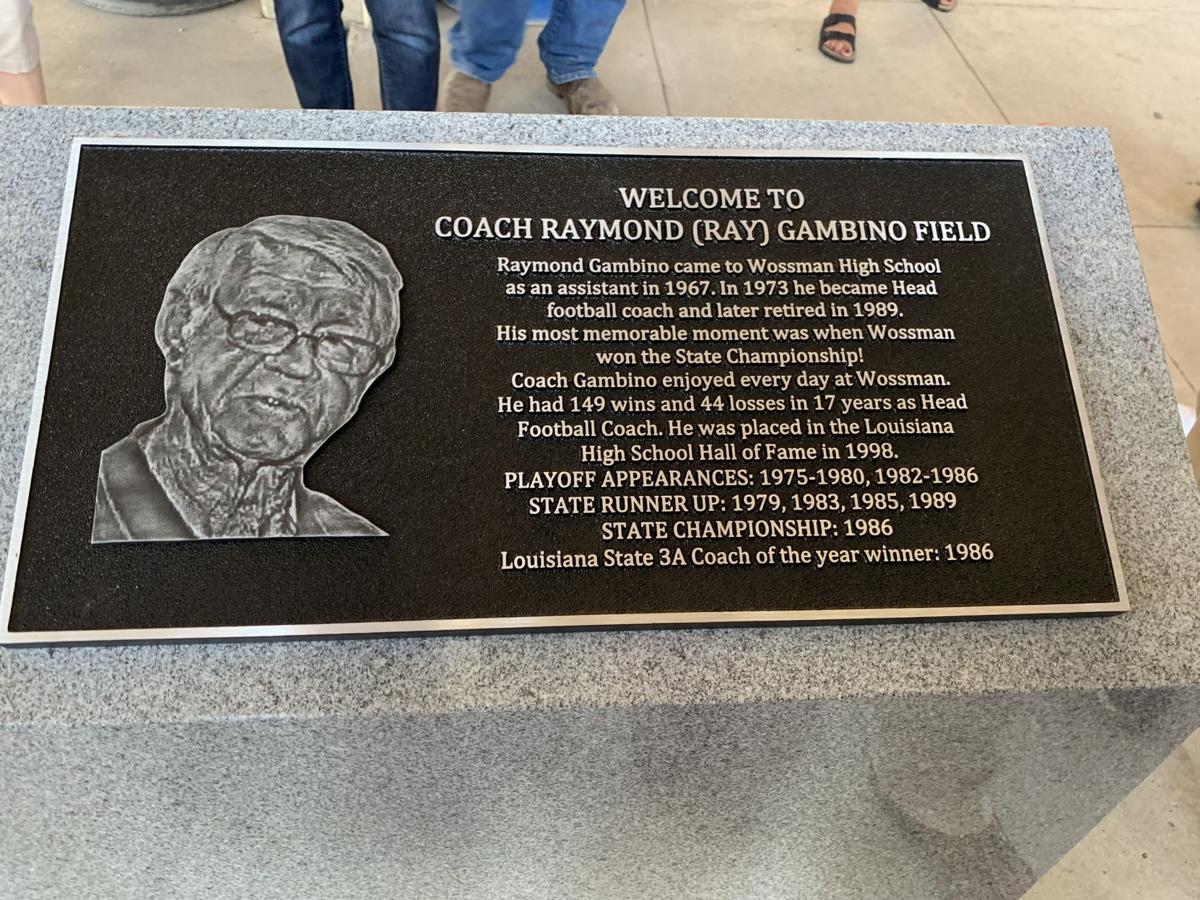 Wossman has named its football field in honor of the coach who orchestrated the Wildcats’ lone state title.

Ray Gambino Field was dedicated on Thursday, Sept. 26, the night prior to the school’s homecoming football game.

Contacted two days prior to the event, Gambino and wife Gail made a hasty return from Gainesville, Fla. for the ceremony.

“I received a phone call Tuesday in Florida, and was asked if I could be there Thursday night at 6:00. I said, ‘Sure, I’ll be there,’” Gambino said. “It’s a great honor. I’m humbled by it.”

Accompanied by his wife, Gail, and daughters Lisa Boggs of Benton and Laura Gregory of Bastrop (daughter Diana Williams of Fort Worth, Texas was unable to attend), Gambino looked on as a plaque commemorating the field was unveiled underneath Grady Jones Stadium. The plaque was a project of the Wossman Wildcat Athletic Association.

Among the speakers were Rose Lee, who the was cheerleader sponsor during Gambino’s tenure and later the school’s principal; current Wossman head coach Dean Smith, and current principal Harrington Watson III.

“So many people were there, the police showed up to see what was going on,” Gambino said. “The good thing about it was having so many of my ballplayers there. That meant a lot to me. Of course, it was great that my family was there to see it.”

Eight members of the Wildcats’ 1986 state championship team were in attendance.

“They even had their rings on,” Gambino said, beaming with pride.

The crowning achievement of Gambino’s Hall of Fame career was a 9-7 victory over John Curtis in the 1986 Class 3A state championship game (3A was the state’s second-largest classification at the time).

Gambino was an assistant coach when the doors of the new Wossman High School, located on Monroe’s south side, were opened in 1967. He spent the next 22 years at Wossman, including the final 17 as head coach, before retiring from the public school system in 1989.

“I had good coaches and wonderful kids at Wossman,” Gambino said. “I could relate with those kids. I really enjoyed my time at Wossman.”

If Gambino has one regret from his storied career, it is leaving Wossman too soon.

“I wish I would have stayed a couple of more years, but that’s the way it goes,” Gambino said. “At the time, I was ready to get out of coaching for a couple of years.”

“I worked for the best administrator in the world in Grady Jones,” Gambino said. “I would go the state meetings, and every year people would come up to me and say, ‘I wish I could work for a principal like him.’ Grady gave me a free hand. I never heard of one teacher that didn’t like Grady. He always put the kids first.”

Following a brief hiatus, Gambino was hired as head football coach and athletic director at St. Frederick in December of 1991. Jones was hired as the school’s principal a couple of years later.

Gambino spent three years as head coach, guiding the Warriors to unprecedented success before turning the program over to longtime assistant Delton Dearman. Staying on as AD, Gambino spent nine years at St. Fred until retiring for good in 2000.

From the time Gambino began his coaching career as head coach at Bastrop Junior High, his wife, Gail, was there every step of the way.

“In 29 years as a head coach, Gail missed two of my ballgames,” Gambino said. “She missed one game while giving birth to Laura. Another time, she said something about having to get ready to go to a game. It was going to be a blowout game, and I said, ‘Why would you go? It’ll be over in 30 minutes.’ And, it was.”

Gambino spent the 1966 season as an assistant at Jena. Passing the construction site on his daily commute to LaSalle Parish, Gambino immediately targeted Wossman as the next stop on his coaching journey.

“Paul Neal had been named the new principal, so I went and asked him for a job,” Gambino recalled. “He said, ‘You need to go talk to (head coach) Willie Ragan.’”

That was music to Gambino’s ears.

“I was a couple of years ahead of Willie at Neville, but we were from the same neighborhood,” said Gambino, who grew up just six blocks away from Wossman on Winnsboro Road.

“We all had horses back then,” Gambino recalled. “When the new school first opened, you could still see the nails in the fence from where the horse stalls were. They had torn the horse stalls down, but the fence was still there.”