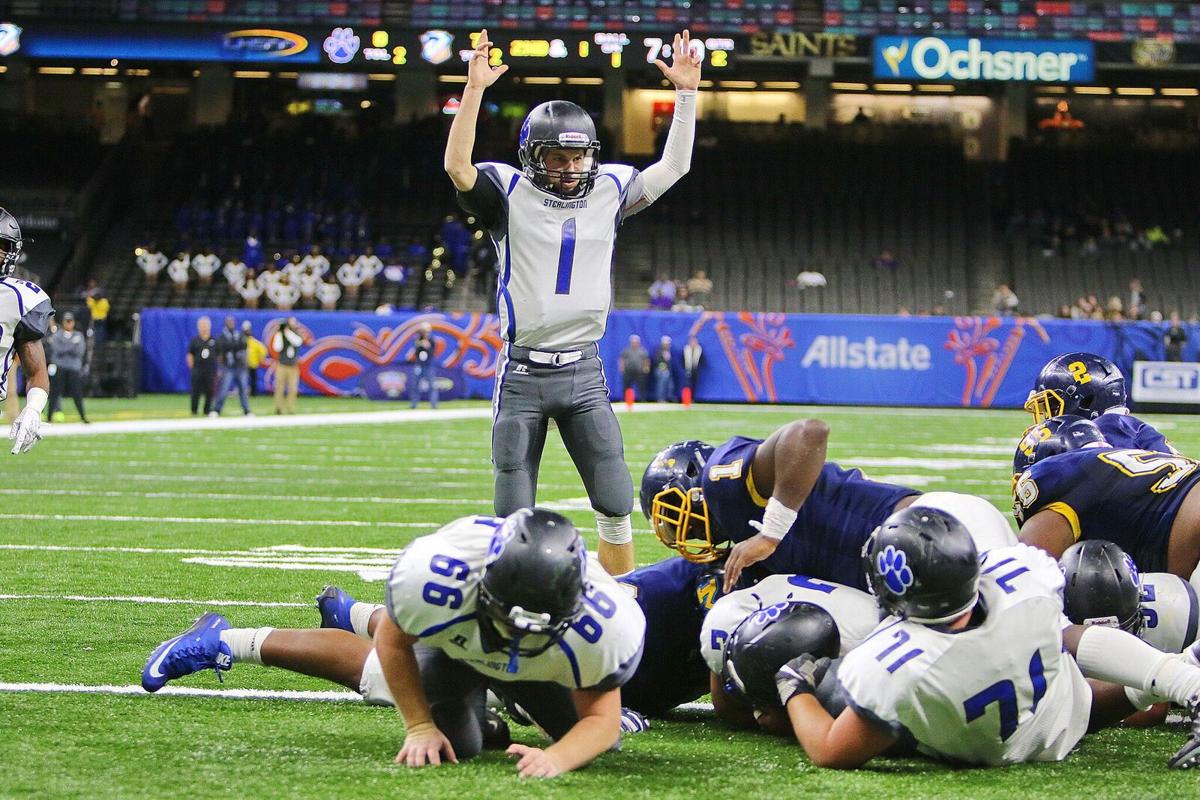 Carson Clowers (1) celebrates a Sterlington touchdown by Tyler Muse in the Panthers' win over Madison Prep in the Class 2A state title game on Friday. 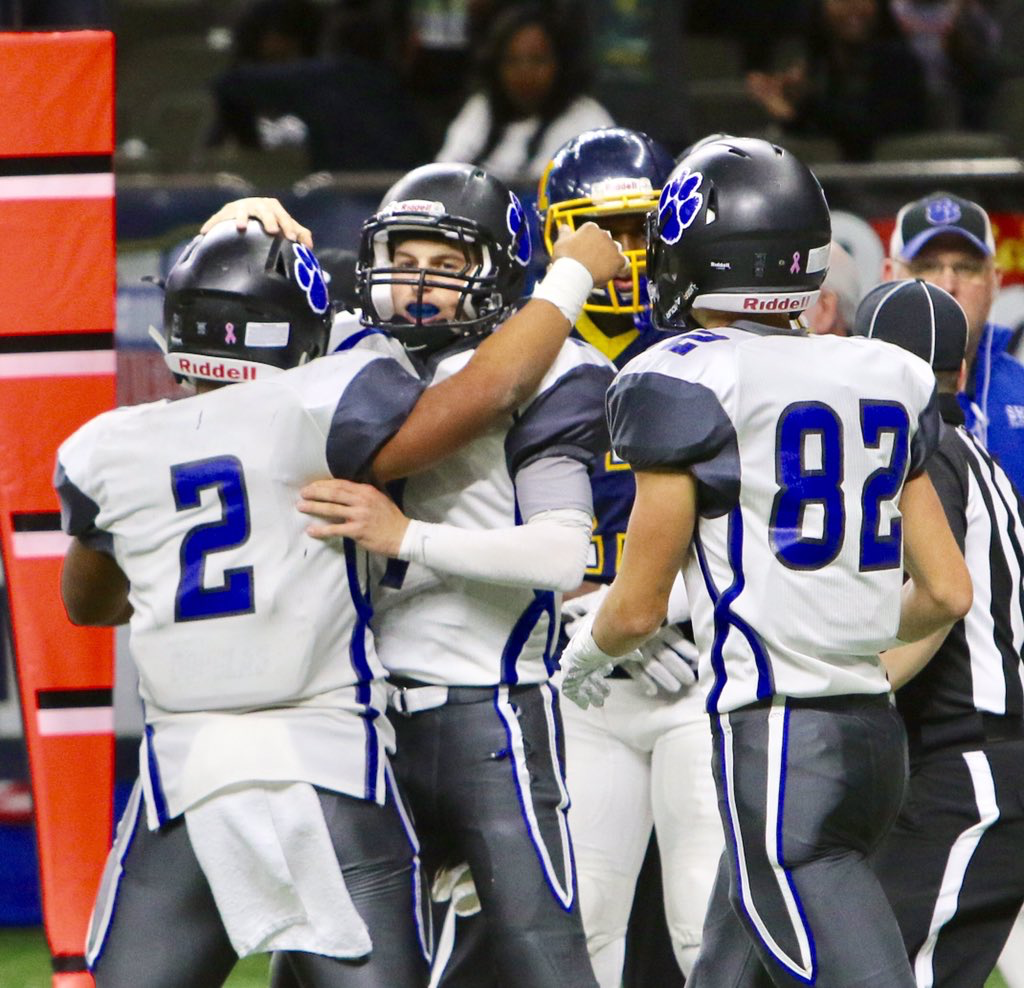 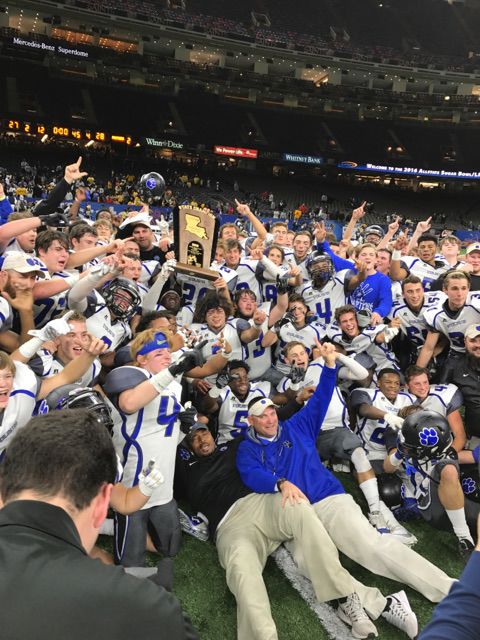 Sterlington celebrates after beating No. 2 Madison Prep to win the school's first state championship in the sport of football.

Carson Clowers (1) celebrates a Sterlington touchdown by Tyler Muse in the Panthers' win over Madison Prep in the Class 2A state title game on Friday.

Sterlington celebrates after beating No. 2 Madison Prep to win the school's first state championship in the sport of football.

The old adage rung true in the LHSAA 2A State Championship Game, where an undersized Sterlington front dug in for a two-point try against a Madison Prep offensive line that averaged 6’2”, 310 pounds across the line of scrimmage.

Behind Sterlington’s bench, a sea of blue unified and chanted “STP” (something to prove) as a Ty Walker 5-yard touchdown reduced the Panthers’ lead to 28-27 with 44 seconds remaining. No doubt about it — the Chargers were going for the win, and the Panthers weren’t caught by surprise.

“We kind of thought they would,” Sterlington head coach Jason Thompson said. “We felt they would because they were tired. Of course, we were tired too, but those guys were huffing and puffing.”

At the snap, defensive lineman Noah Weatherly led a surge and several Panthers followed to stop running back Troy James short of the goal line. A recovered onside kick and two victory formations later, Sterlington’s three-game run of dramatic nail-biters culminated in a 2A state title.

It was those tight contests against No. 5 Kinder and No. 1 Many that helped prepare No. 4 Sterlington for such a moment in New Orleans’ Superdome, Thompson said.

“We knew if we could get the game into the third and quarter, we didn’t think they played in too many games deep,” Thompson said. “We’ve played a lot of four-quarter (games) and then some. We went to three overtimes last week.”

While the game’s ending was as sweet as Sugar Bowl Drive for the (13-2) Panthers, the start of the game saw No. 2 (14-1) Madison Prep run through and around the Panthers on a 13-play drive that ended in a James 4-yard score.

Sterlington didn’t tie the game until the second quarter when Tyler Muse found paydirt on a short score, however, Sterlington began generating success with its fullback dive to Muse in the opening quarter.

That inside running attack continued long drives, and it forced Madison Prep to pinch inside and account for Muse, which opened up the option game for quarterback Carson Clowers and running back Devante Douglas.

“We’ve morphed more into a throwing team in the last six weeks, and Tyler wasn’t used as much,” Thompson said. “Sitting with the offensive staff Monday, (offensive coaches) felt this would be a good game for Tyler. They felt not many teams ran it right at (Madison Prep). Tyler certainly stepped up and had a good game.”

Madison Prep answered Muse’s touchdown run with a 5-yard Walker score. Walker finished the game with 230 rushing yards and three rushing touchdowns for the Chargers, but three Charger fumbles and an interception by Sterlington’s Darren Istre kept Madison Prep from capitalizing on its rushing success.

Madison Prep head coach Mike Roach said those mistakes was what ultimately cost his team against a turnover-less Sterlington squad.

For the most part, Sterlington took advantage of those turnovers, and after a 16-yard Clowers score on an option keeper, Sterlington and Madison Prep entered halftime tied at 14.

With the first possession of the second half, Sterlington made a statement with a seven-play, 67-yard drive that ended in a 10-yard touchdown run by Clowers. Thompson and his staff leaned on the offensive linemen, as they have for most of the year. Clowers tipped his hat to his blockers after Sterlington’s victory.

“All of the credit goes to the offensive line,” Clowers said. “(Madison Prep) are some big guys, and they’re bigger when you get close to them.”

A 33-yard run from Walker tied the game 21-21 late in the third quarter. Sterlington regained the lead in the fourth when a 10-play drive ended in a 4-yard touchdown run by Clowers with less than seven minutes to go. Clowers finished the game with 57 yards and three rushing touchdowns on 10 carries, while Sterlington pounded it with Muse 23 times for 98 yards and a score.

“These guys, their preparation through the week is unlike anything I’ve been around, and then their fight during the game is probably unlike any team I’ve been around, as well,” Thompson said. “I’ve probably been around more talented teams than this one, but never one with this much heart, guts and desire as this group.”

Cody Seward, who had six tackles in the victory and wore No. 48 to honor Franklin Parish's late Tyrell Cameron, collapsed near midfield during Sterlington’s celebration. Emotional, he was embraced by coaches and other players, as his senior season reached the best possible ending.

“Senior year, the best way to go out is a state championship,” Seward said. “This is the last time I get to represent this number, and I think this is the best way that I could ever honor this number because I’ll probably never play football again. I’m 140 pounds. This is it for me.”

A collection of images shot by Tom Morris in the Class 2A state championship game between Madison Prep and Sterlington on Friday Dec. 9, at th…

Seasons of Louisiana with Dianne Cage for May 28. 2020

The Bank of Oak Ridge, Spartan Adventure Park, and Drax, were honored with Thomas H. Scott A… Read more